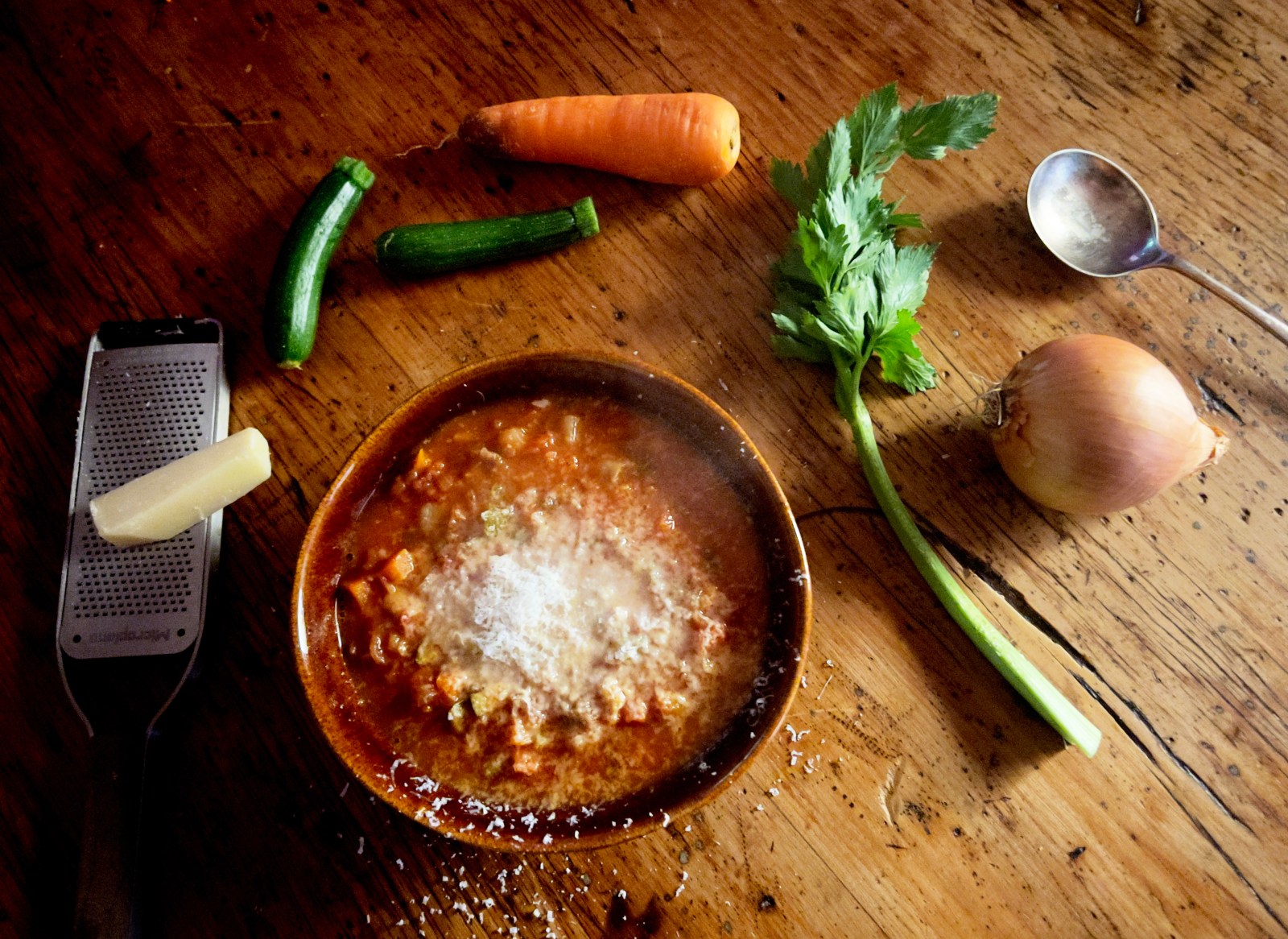 Minestrone is a thick Italian vegetable soup, but it’s more than that. Marcella Hazan, one of the most respected authorities on Italian food, described minestrone as ‘a soup of mellow, dense flavour that recalls no vegetable in particular but all of them at once’.

Like many of the famous dishes cooked and served in thousands or even millions of households, minestrone can be made in many ways. But let’s follow a recipe that best fits Marcella Hazan’s expert advice and method in her seminal The Classic Italian Cookbook.

The etymology first: the word minestrone, says Wikipedia, comes from minestra and is “the augmentative form of minestra, ‘soup’ or more literally ‘that which is served’, from minestrare, ‘to serve’, and cognate with administer as in ‘to administer a remedy’.” So the name gives no clues as to what kind of soup it is, as such, though it is only ever based on vegetables, even if meat is sometimes added.

It is believed that earlier soups were called minestra, or minestre in the plural, because the head of the household would administer (serve) the soup from a central bowl to members of the clan. In Italy today, certain soups (tomato, fish, etc) are called zuppa, while heartier soups or pasta broths are minestra/e, and minestrone refers to the fulsome, more substantial soups or stews.

But Hazan paints a clearer picture of minestrone than anything in the Wikipedia entry: “A vegetable soup will tell you where you are in Italy almost as precisely as a map,” she writes. “There are the soups of the south, leaning heavily on tomato, garlic and oil, sometimes containing pasta or rice; there are those of the centre, heavily fortified with beans; the soups of the north, with rice; those of the Riviera, with fresh herbs, and there are nearly as many variations in between as there are local cooks.”

But it is in Romagna that the minestrone she prizes is made, and the version I cooked this week is based on her Minestrone di Romagna, which has neither rice or pasta in it. She also has a recipe for Minestrone freddo alla Milanese, a cold version. It “must be made ahead of time”, she says of this soup which revives leftover minestrone by adding water, raw rice and plenty of pepper and cooking it until the rice is al dente, about 12 minutes. It’s then ladelled into bowls, and fresh basil and grated Parmesan are added, but it’s not served immediately. It is left to cool completely before being consumed; so this is something you can do with any leftover minestrone the day after you have eaten it.

In Romagna, she says, “very little is put into minestrone beyond a variety of seasonal vegetables, whose separate characteristics give way and intermingle through very slow cooking in broth”. The result is the soup I quoted in the introduction above.

Minestrone commonly consists of vegetables including onion, celery, carrot, tomato, beans, potatoes, leaf vegetables, Parmesan, stock, and sometimes pasta or rice. Hazan uses the cleaned rind of a piece of Parmesan cheese. The food writer Angelo Pellegrini advised the use of bean stock as the base for minestrone.

Because there is no fixed recipe, and despite the undeniable fact that there are a million Italian cooks who will swear that their and only their recipe is the correct one, we’re safer in the hands of our chosen expert, Hazan.

Key to her method is this: “It is not necessary to prepare all the vegetables ahead of time although you may do so if it suits you. The vegetables do not go into the pot all at once, but in the sequence indicated, and while one vegetable is slowly cooking in oil and butter, you can peel and cut another.”

She advises cooking each vegetable for at least three minutes before adding the next. First the onion, then the carrots, then celery, potatoes, zucchini (courgettes), and French (green) beans. Each is cooked for a few minutes, then cabbage is added and cooked for another six.

Then comes the stock, the Parmesan crust, tomatoes and salt and it is cooked very slowly for three hours. White beans (such as cannellini) are only added shortly before the broth is ready, and if it seems to be too runny it can be thickened with tomato paste.

With that in mind, at this point I scooted off to buy certain ingredients so I could get it on the go in time for supper. Here’s how I made it…

1 or 2 potatoes, weighing about 250 g, peeled and diced small

3 or 4 small zucchini (courgettes), topped and tailed, and diced

1.5 litres beef or chicken stock (I used chicken: I’d have preferred beef stock but didn’t have any)

A thick piece of Parmesan crust, as generous as you like

In a large heavy soup pot, melt the butter with the olive oil and add the sliced onions. Simmer gently for 3 minutes, with an occasional stir.

Peel and dice each of the next five listed vegetables in order of the ingredients above (carrots, celery, potatoes, zucchini, green beans), adding each after every three minutes or so, stirring once in a while.

Add the shredded cabbage (I used red but green is more usual, and Hazan recommends Savoy if you can source it) and cook gently for 6 more minutes, stirring once or twice.

Have the heated stock ready, and pour it in, followed by the tomatoes and the Parmesan rind. Salt to taste but not too heavily as you can adjust it later.

Put a lid on and simmer at a low heat for at least three hours. It needs to be “soupy thick”, says Hazan, never thin or watery.

After three hours of cooking, add the cannellini beans, stir and heat through. I stirred in about 4 Tbsp of tomato paste near the end, to thicken it. Taste and adjust salt if needed. Finally, remove the Parmesan rind, which comes out somewhat limp and unrecognisable as Parmesan, and stir in plenty of grated Parmesan. DM/TGIFood