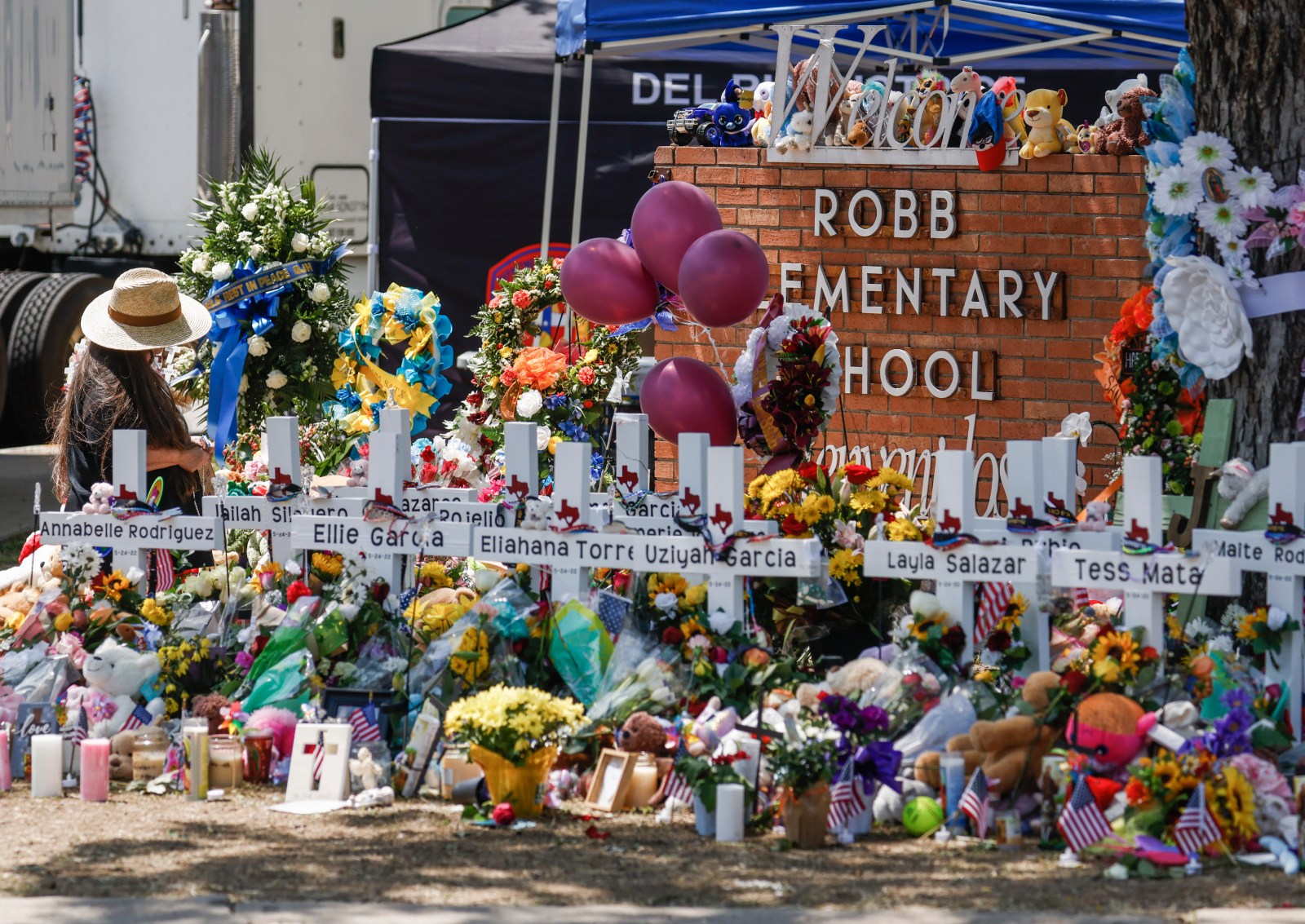 A woman kneels amongst crosses bearing names of victims following the mass shooting at the Robb Elementary School in Uvalde, Texas, USA, 28 May 2022. EPA-EFE/TANNEN MAURY

June 21 (Reuters) - The elementary school in Uvalde, Texas, where a teenage gunman killed 19 children and two teachers last month will be demolished, the city's mayor said on Tuesday.

The mayor’s announcement came several hours after a senior Texas official said the law enforcement response to the shooting at Robb Elementary School was “an abject failure” in which a commander put the lives of officers over those of the children.

Uvalde Mayor Don McLaughlin did not give a timeline for when the school would be demolished, but said at a council meeting: “You can never ask a child to go back or teacher to go back in that school ever.”

In a separate Texas state Senate hearing into the May 24 shooting, Texas Department of Public Safety (DPS) Director Steven McCraw said the onsite commander made “terrible decisions” and officers at the scene lacked sufficient training, costing valuable time during which lives may have been saved.

“There is compelling evidence that the law enforcement response to the attack at Robb Elementary was an abject failure and antithetical to everything we’ve learned,” McCraw said.

Many parents and relatives of the children and staff have expressed deep anger over police action after the gunman entered Robb Elementary School and began shooting.

One delay McCraw discussed was the search for a key to the classroom where the shooting occurred. He noted that the door was not locked and there was no evidence officers tried to see if it was secured while others searched for a key.

“There’s no way … for the subject to lock the door from the inside,” McCraw said.

Days after the shooting, the Texas DPS said as many as 19 officers waited for more than an hour in a hallway outside classrooms 111 and 112 before a U.S. Border Patrol-led tactical team finally made entry. McCraw reiterated that in the hearing on Tuesday.

“Three minutes after the subject entered the west building, there was a sufficient number of armed officers wearing body armor to isolate, distract and neutralize the subject,” McCraw added.

“The only thing stopping a hallway of dedicated officers from entering Room 111, and 112, was the on-scene commander, who decided to place the lives of officers before the lives of children,” the director said in the hearing.

Arredondo did not address either of the two hearings on Tuesday.

Earlier this month, Arredondo said he never considered himself incident commander at the scene of the shooting, and that he did not order police to hold back on breaching the building.

At the city council meeting on Tuesday night, McLaughlin accused McCraw of deflecting blame away from state police enforcement.

“Every briefing he leaves out the number of his own officers and rangers that were on scene that day,” the mayor said. “Colonel McCraw has an agenda and it’s not to present a full report on what happened and to give factual answers to the families of this community.”

McLaughlin said state officials were leaving the city and its residents in the dark, declaring: “The gloves are off.”

Greg Abbott, Texas’s Republican governor, said in a statement he wants all facts regarding the shooting released to the victims’ families and the public as quickly as possible.

The Uvalde City Council voted unanimously late on Tuesday to deny a leave of absence for Arredondo as a council member.

Arredondo won election to the council shortly before the shooting but has not appeared at the two council meetings since then. Denying him a leave of absence sets up his potential departure as a council member if he misses a third consecutive meeting.

Arredondo told the Texas Tribune he left his two radios outside the school because he wanted his hands free to hold his gun. He had said he called for tactical gear, a sniper and keys to get inside, holding back from the doors for 40 minutes to avoid provoking sprays of gunfire.

Community members along with parents of the victims urged Arredondo to resign during an impassioned school board meeting on Monday, ABC News reported.

By Kanishka Singh and Brendan O’Brien

(Reporting by Kanishka Singh in Washington and Brendan O’Brien in Chicago; Additional reporting by Tim Reid in Los Angeles; Editing by Cynthia Osterman and Christopher Cushing)