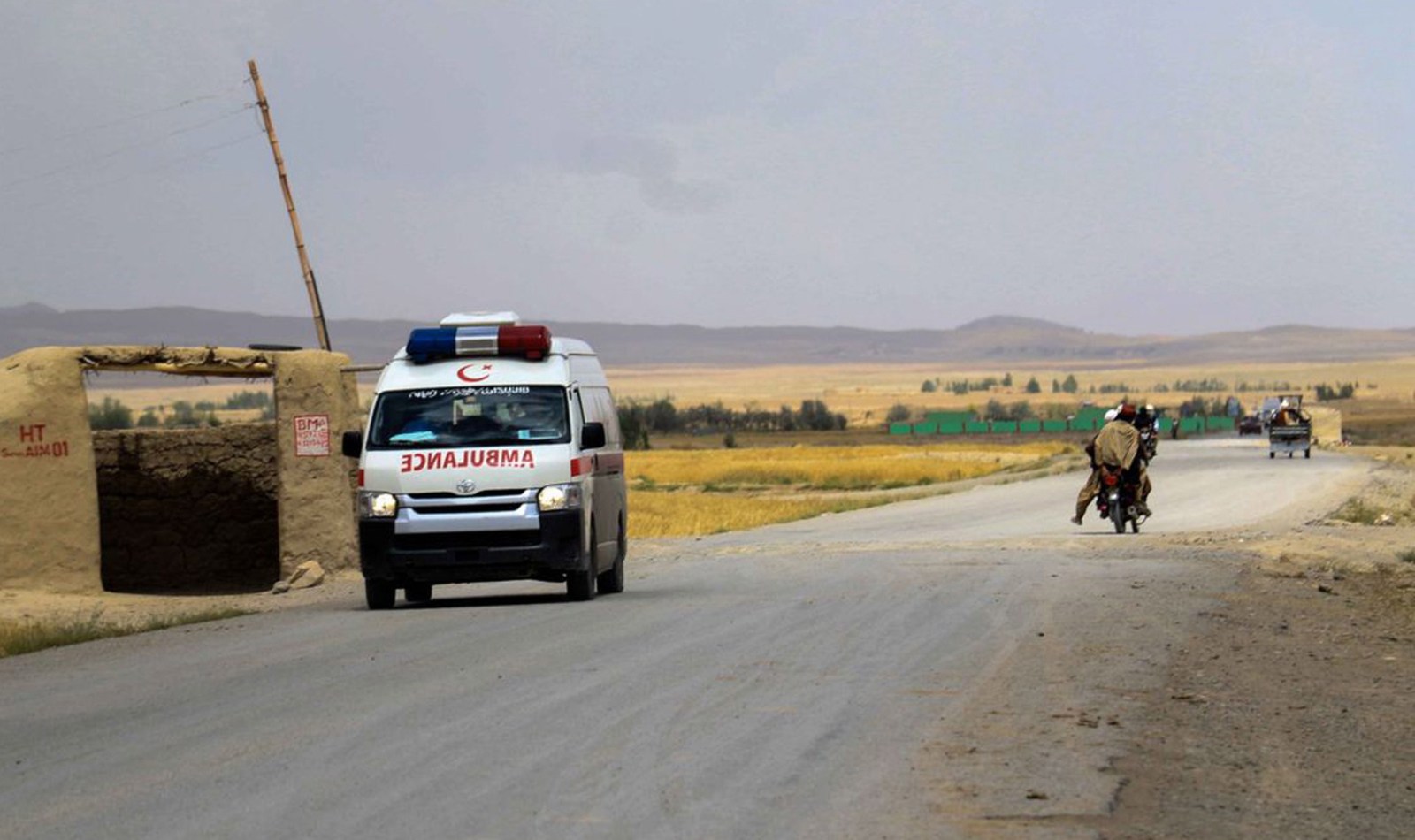 An ambulance shifts injured victims of the earthquake from Paktia to hospitals in Ghazni, Afghanistan, 22 June 2022. More than 1,000 people were killed and over 1,500 others injured after a 5.9 magnitude earthquake hit eastern Afghanistan before dawn on 22 June, Afghanistan's state-run Bakhtar News Agency reported. According to authorities the death toll is likely to rise. EPA-EFE/STRINGER

KABUL, June 22 (Reuters) - An earthquake of magnitude 6.1 killed 1000 people in Afghanistan early on Wednesday, disaster management officials said, with more than 600 injured and the toll expected to grow as information trickles in from remote mountain villages.

Photographs on Afghan media showed houses reduced to rubble, with bodies swathed in blankets lying on the ground.

Helicopters were deployed in the rescue effort to reach the injured and fly in medical supplies and food, said an interior ministry official, Salahuddin Ayubi.

“The death toll is likely to rise as some of the villages are in remote areas in the mountains and it will take some time to collect details.”

Wednesday’s quake was the deadliest since 2002. It struck about 44 km (27 miles) from the southeastern city of Khost, near the border with Pakistan, the U.S. Geological Survey (USGC) said.

Most of the confirmed deaths were in the eastern province of Paktika, where 255 people were killed and more than 200 injured, Ayubi added. In the province of Khost, 25 were dead and 90 had been taken to hospital.

Haibatullah Akhundzada, the supreme leader of the ruling Taliban, offered his condolences in a statement.

Mounting a rescue operation could prove a major test for the Taliban, who took over the country in August and have been cut off from much international assistance because of sanctions.

Shaking was felt by about 119 million people in Pakistan, Afghanistan and India, the EMSC said on Twitter, but there were no immediate reports of damage or casualties in Pakistan.

The EMSC put the earthquake’s magnitude at 6.1, though the USGC said it was 5.9.

Adding to the challenge for Afghan authorities is recent flooding in many regions, which the disaster agency said had killed 11, injured 50 and blocked stretches of highway.

The disaster comes as Afghanistan grapples with a severe economic crisis since the Taliban took over, as U.S.-led international forces withdrew following two decades of war.

In response to the Taliban takeover, many nations imposed sanctions on Afghanistan’s banking sector and cut billions of dollars worth of development aid.

Humanitarian aid has continued, however, with international agencies, such as the United Nations, operating.

The U.N.’s office for the Coordination of Humanitarian Affairs (UNOCHA) said Afghanistan had asked humanitarian agencies to help with rescue efforts, and teams were being despatched to the quake-hit area.

A spokesman of Afghanistan’s foreign ministry said it would welcome international help. Neighbouring Pakistan said it was working to extend assistance.

Large parts of South Asia are seismically active because a tectonic plate known as the Indian plate is pushing north into the Eurasian plate.

In 2015, an earthquake struck the remote Afghan northeast, killing several hundred people in Afghanistan and nearby northern Pakistan.

(Reporting by Shubham Kalia in Bengaluru and Mohammad Yunus Yawar in Kabul and Jibran Ahmad in Peshawar; Additional reporting by Alasdair Pal in Delhi; Writing by Charlotte Greenfield; Editing by Robert Birsel and Clarence Fernandez)