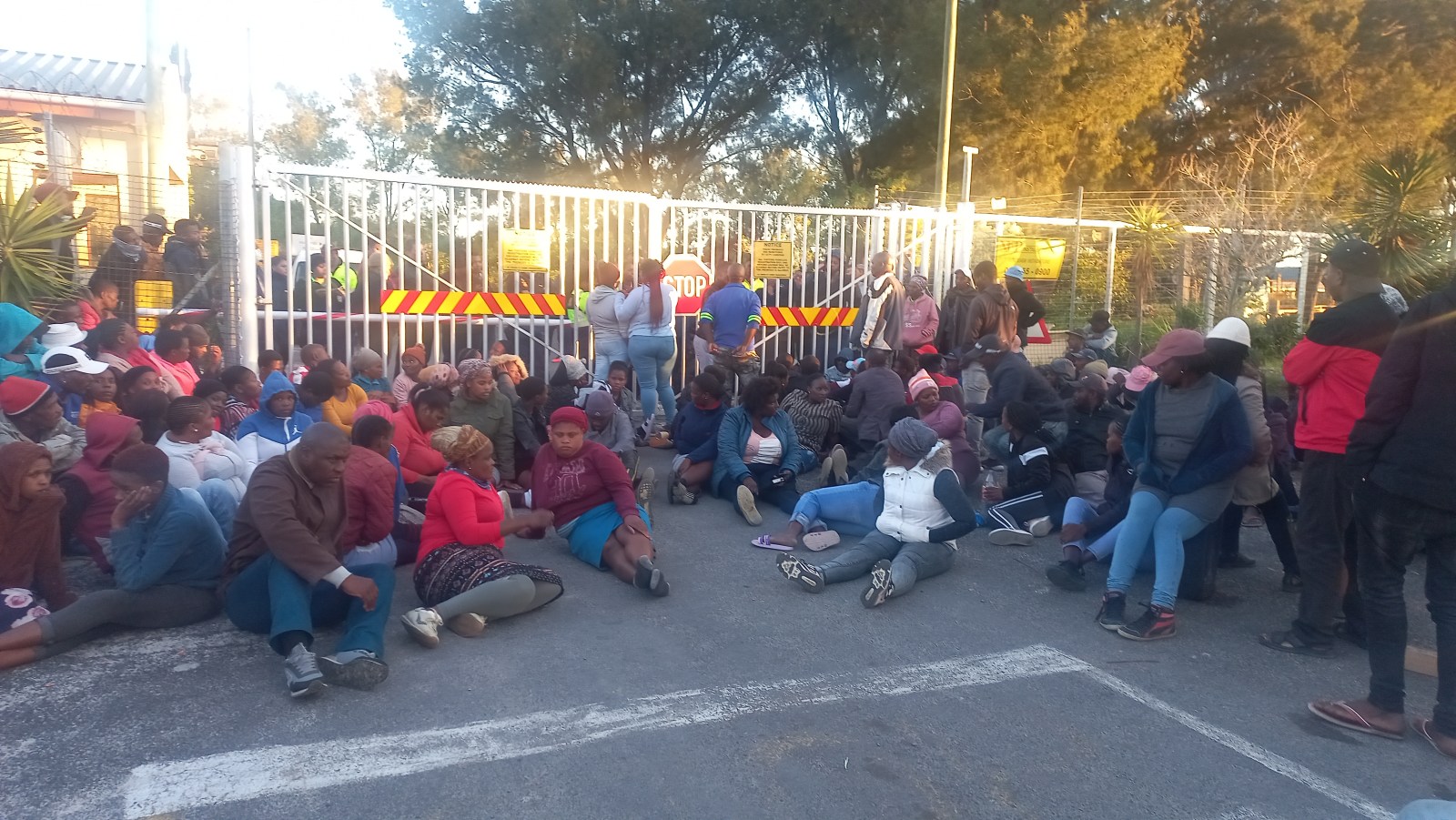 Protesting residents of the Covid informal settlement block the entrance to Driftsands Nature Reserve. A short while later they were dispersed by police. (Photo: Siphokazi Mnyobe)

Residents of Covid informal settlement want CapeNature to help them find new land, but CapeNature says it is not their responsibility.

They were demanding that CapeNature representatives address their demands for new land to live on.

Earlier in June the occupiers of this land near Mfuleni had been served with eviction notices and had until 25 June to vacate the nature reserve. Most of the settlement lies within the Driftsands Nature Reserve, which is administered by CapeNature on behalf of the Western Cape Government.

Then, about 45 shacks in the settlement were washed away in floods last week. Local and provincial governments do not consider the land safe for habitation.

Residents told us that they are willing to move from the reserve, but that CapeNature must identify land where they can live, service it, and help them to move. The Covid informal settlement was settled in 2020 during the pandemic lockdowns.

When we arrived at Driftsands at 2pm on Monday, some CapeNature workers who had left for lunch were locked outside and could not re-enter. Workers on the late shift also could not get in. There were trucks idling outside.

Community leader Mncuntula told GroundUp that they would jump over the fence and sleep inside the reserve if no one attended to them. He said that they had been trying to have a meeting with CapeNature officials for months, but had been spurned.

Police and Law Enforcement tried to negotiate with residents to allow workers access to the site, but residents sat down at the entrance.

After four hours, a representative from CapeNature arrived and asked the protesting residents to write down their grievances, which they were told would be sent to the right people. The CapeNature official told the protestors that only the City of Cape Town and the Department of Human Settlements were able to assist them, not CapeNature.

But residents did not budge and appeared to be convinced that CapeNature was the entity responsible for addressing their plight.

Petro Van Rhyn, advocacy manager at CapeNature told GroundUp that Monday’s events were unfortunate and that some staff had been traumatised.

Van Rhyn said that CapeNature maintains an open line with the community and its leadership structures. Previous meetings with Covid residents had included discussions on the status of the land as a nature reserve and its role in flood reduction. They discussed voluntary relocation to a safer site within Driftsands, particularly for those living on the retention dam wall.

Van Rhyn said that the Driftsands Nature Reserve is not suitable for human settlement as it includes wetlands, the Kuils River and its banks, and flood reduction infrastructure.

“CapeNature cannot provide basic services — it is not the entity’s responsibility, and the land use of nature conservation does not allow for service delivery,” said Van Rhyn.

Malusi Booi, Mayco Member for Human Settlements, said that the City is unable to cater for unplanned settlements like Covid, as they are not budgeted for, and established informal settlements are prioritised by the City. DM