Moscow fumes after EU cuts off shipments to Baltic outpost 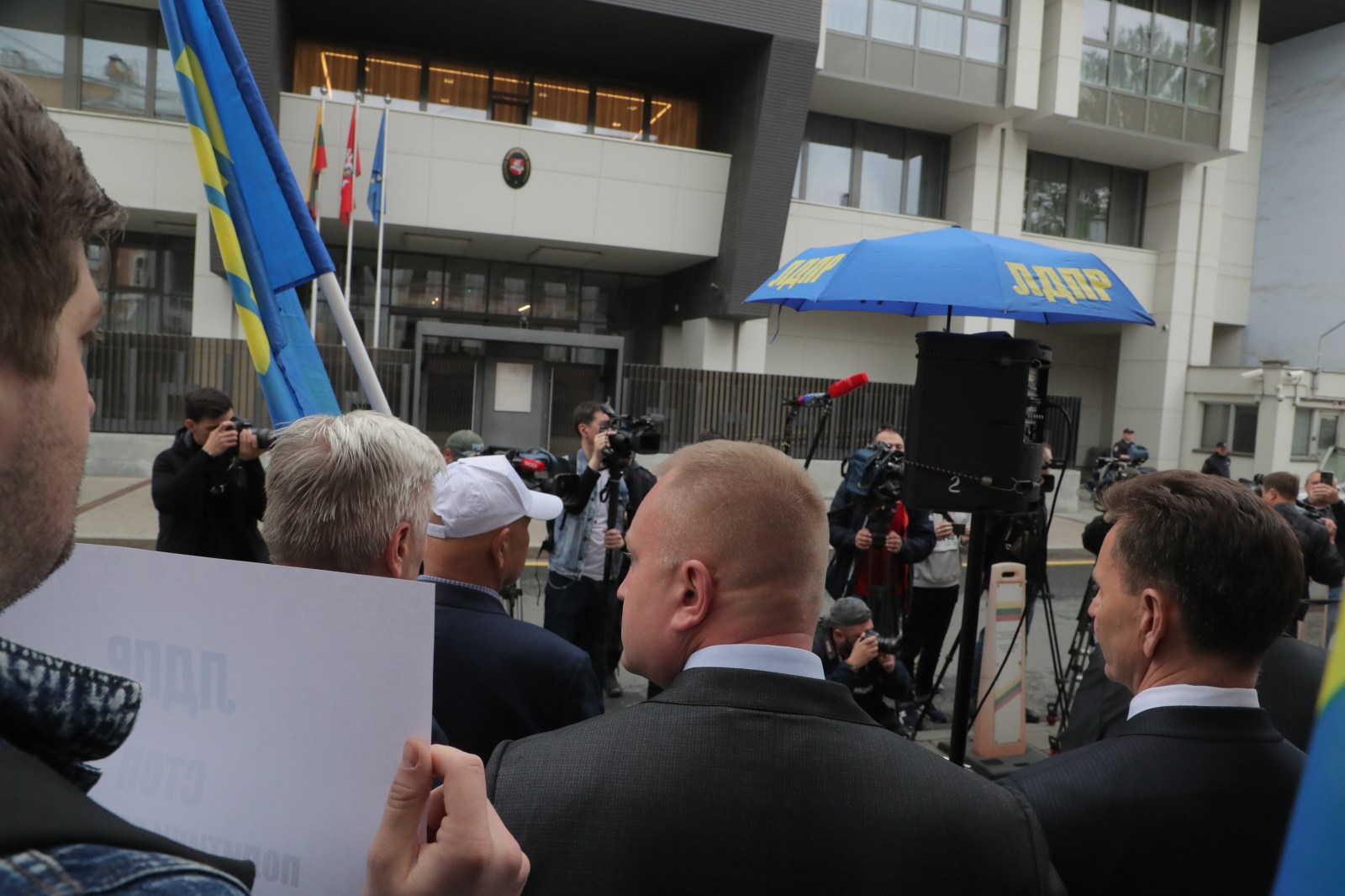 Activists of the Liberal Democratic Party of Russia (LDPR) attend a rally against Vilnius's decisions to restrict the cargo rail transit between Russia and Kaliningrad near the entrance to the Lithuanian embassy in Moscow, Russia, 21 June 2022. Vilnius imposed ban on railway transit through Lithuania of goods under the EU sanctions between Kaliningrad region and the rest of Russian territory. The ban came into effect from June 17 as part of the fourth package of the EU sanctions imposed on Russia. On 24 February 2022 Russian troops entered the Ukrainian territory in what the Russian president declared a 'Special Military Operation', starting an armed conflict that has provoked destruction and a humanitarian crisis. EPA-EFE/MAXIM SHIPENKOV

KYIV, June 21 (Reuters) - Russia summoned the European Union's ambassador in Moscow on Tuesday, fuming over what it calls an illegal rail blockade of a Russian outpost on the Baltic Sea, the latest stand-off over sanctions imposed over the war in Ukraine.

On the ground in eastern Ukraine, Russia’s separatist proxies said they were advancing towards Kyiv’s main battlefield bastion. A Ukrainian official described a lull in fighting there as the “calm before the storm”.

The latest diplomatic crisis is over the Kaliningrad enclave, a port and surrounding countryside on the Baltic Sea that is home to nearly a million Russians, connected to the rest of Russia by a rail link through EU- and NATO-member Lithuania.

Lithuania has shut the route for basic goods including construction materials, metals and coal, which it says it is required to do under EU sanctions that took effect on Saturday.

Russia calls the move an illegal blockade and has threatened unspecified retaliation against Lithuania.

EU envoy Markus Ederer appeared at the Russian Foreign Ministry on Tuesday. EU spokesperson Peter Stano said Ederer “explained that Lithuania is implementing EU sanctions and there is no blockade, and asked them to refrain from escalatory steps and rhetoric”.

The standoff creates a new source of confrontation on the Baltic, a region already set for a security overhaul that would hem in Russia’s sea power as Sweden and Finland apply to join NATO and put nearly the whole coast under alliance control.

Moscow had summoned a Lithuanian diplomat on Monday, but the EU has deflected responsibility from the Lithuanians, saying the policy was a result of collective action by the bloc. Vilnius was “doing nothing else than implementing the guidelines provided by the (European) Commission”, said EU foreign policy chief Josep Borrell.

Within Ukraine, the battle for the east has become a brutal war of attrition in recent weeks, with Russia concentrating its overwhelming firepower on a Ukrainian-held pocket of the Donbas region that Moscow claims on behalf of its separatist proxies.

Moscow has made slow progress there since April in a relentless fighting that has cost both sides thousands of troops killed, one of the bloodiest land battles in Europe for generations.

In recent days Russia has captured Toshkivka, a small city on the west bank further south, giving it a potential foothold to try to cut off the main Ukrainian bastion at Lysychansk.

Rodion Miroshnik, ambassador to Russia of the pro-Moscow separatist self-styled Luhansk People’s Republic, said forces were “moving from the south towards Lysychansk” with firefights erupting in a number of towns.

“The hours to come should bring considerable changes to the balance of forces in the area,” he said on Telegram.

The governor of Ukraine’s surrounding Luhansk region said Russian forces had gained some territory on Monday. It was relatively quiet overnight, but more attacks were coming, Serhiy Gaidai said: “It’s a calm before the storm”.

Although fighting has favoured Russia in recent weeks because of its huge firepower advantage in artillery, some Western military analysts say Russia’s failure to make a major breakthrough so far means time is now on the Ukrainians’ side.

Moscow is running out of fresh troops, while Ukraine is receiving newer and better equipment from the West, tweeted retired U.S. Lieutenant General Mark Hertling, a former commander of U.S. ground forces in Europe.

“It’s a heavyweight boxing match. In 2 months of fighting, there has not yet been a knockout blow. It will come, as RU forces become more depleted,” Hertling wrote.

Dmitry Muratov, editor of Novaya Gazeta, one of Russia’s last independent newspapers, auctioned off a Nobel Peace Prize he had won last year, raising $103.5 million for UNICEF to help Ukrainian refugees. The anonymous buyer bid for the medal by phone at the auction in New York.

Novaya Gazeta, like all other independent media in Russia, has halted publication since Moscow enacted a ban on reporting that departs from the official account of the “special military operation” in Ukraine.