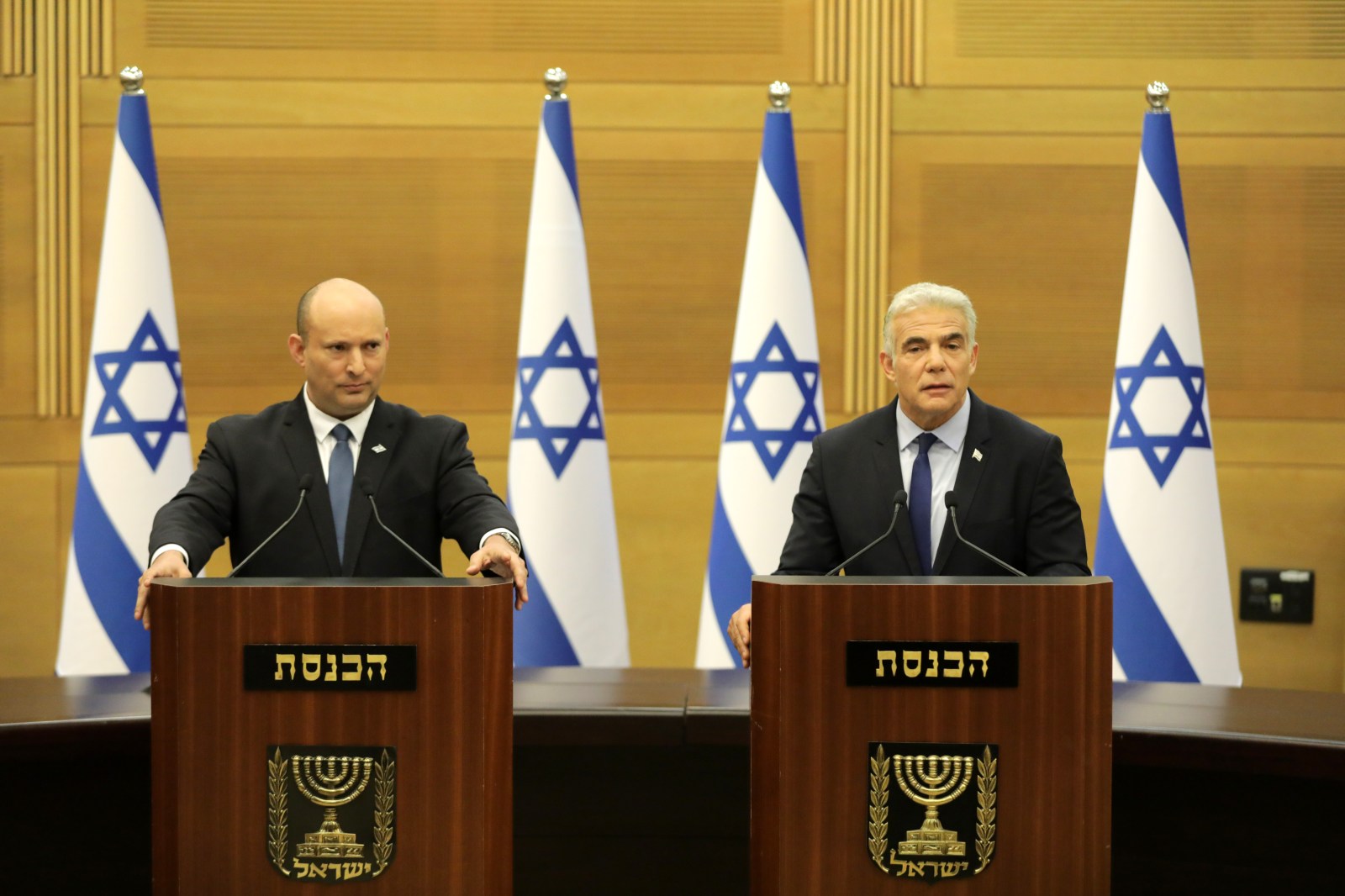 Israeli Prime Minister Naftali Bennett (L) and Foreign Minister Yair Lapid (R) deliver a statement to the media at the Knesset in Jerusalem, 20 June 2022. Bennett and Lapid announced they will send a bill to dissolve the parliament and hold early general elections. EPA-EFE/ABIR SULTAN

JERUSALEM, June 20 (Reuters) - Israeli lawmakers will vote next week to dissolve parliament, opening the way for the country's fifth election in three years, after Prime Minister Naftali Bennett could not contain the rising pressure on his fragile ruling coalition.

Bennett will step aside to be replaced by Foreign Minister Yair Lapid, his partner in the unlikely coalition of opposites that ended former Prime Minister Benjamin Netanyahu’s record 12-year rule 12 months ago.

Lapid, a former journalist who heads the largest party in the coalition, will serve as interim prime minister until new elections can be held.

“We are standing before you today in a moment that is not easy, but with the understanding we made the right decision for Israel,” Bennett said in a televised statement as he stood alongside Lapid.

A vote will be held in parliament next week, after which Lapid will take over the premiership, according to Bennett’s spokesperson.

The move comes just weeks ahead of a planned visit by U.S. President Joe Biden which the government had been counting on to help boost regional security ties against Israel’s longtime enemy Iran.

However the eight-party coalition, including hard-right, liberal and Arab parties with deep differences on questions from religion to the Palestinian issue, had faced growing strains as its slight majority was cut by defections.

“I think the government did very good work over the past year. It’s a shame the country has to be dragged into elections,” said Defence Minister Benny Gantz, head of a centrist party in the coalition.

“But we will continue to function as a temporary government as much as possible,” he said.

A date for the snap parliamentary election was not announced, but Israeli media reported it was likely to take place in October.

Lapid said he would not wait until new elections to address the problems facing Israel.

“We need to tackle the cost of living, wage the campaign against Iran, Hamas and Hezbollah, and stand against the forces threatening to turn Israel into a non-democratic country,” he said.

Bennett, a former commando and tech millionaire who entered national politics in 2013, defended his government’s record, saying it had boosted economic growth, cut unemployment and eliminated the deficit for the first time in 14 years.

But as pressure on the government increased in recent days, he was unable to hold the coalition together and decided to step aside before Netanyahu’s right-wing Likud party could table a motion of its own to dissolve parliament.

Netanyahu, who has vowed a comeback despite facing trial for corruption, said Likud would lead the next government and he poured scorn on Bennett, a right-wing politician who was once one of his closest aides.

“This evening people are smiling,” said Netanyahu, speaking to reporters at parliament. “They understand something great happened here. We are getting rid of the worst government in the country’s history.”

In Gaza, the Palestinian Islamist group Hamas, which does not recognize Israel’s right to exist, said it would not alter its course with any new government.

“We must resist to regain the full rights of our people,” said spokesperson Fawzi Barhoum.