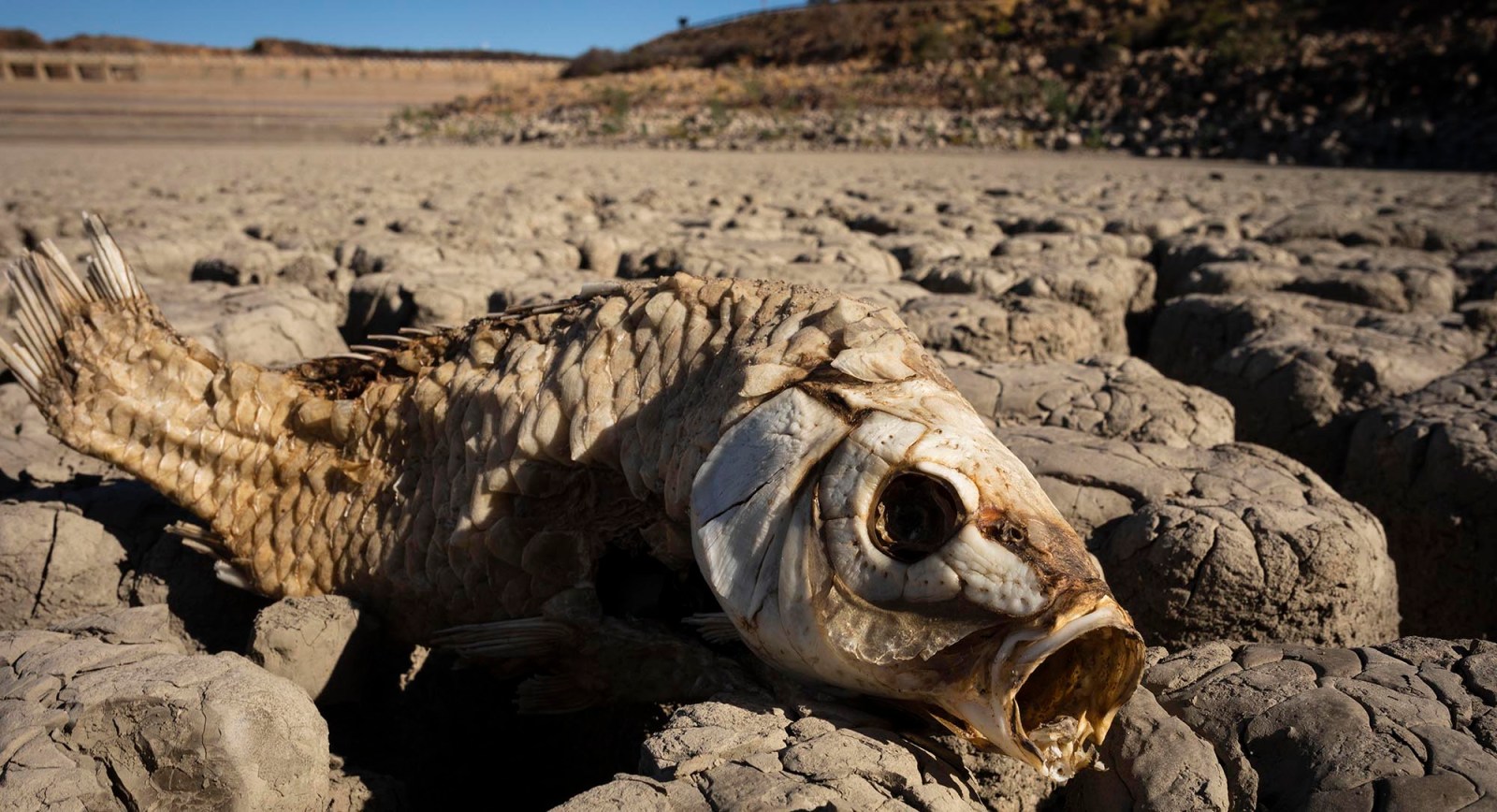 One of hundreds of dead fish in the Nqweba Dam, the main dam feeding the town of Graaf Reinet, in January 2020. The ongoing drought has left Karoo towns struggling to provide residents with water. (Photo: EPA-EFE / Kim Ludbrook)

Eastern Cape towns under the Dr Beyers Naude municipality are battling for water after levels in their dams have fallen too low.

Karoo towns under the Dr Beyers Naudé municipality in the Eastern Cape are struggling to supply water to residents as their dams have dried up amid a five-year drought.

The municipality’s water source since 2020 has been the Nqweba Dam, which was then at 19%. In April 2021, the dam was at 8.4% capacity and the municipality stopped drawing water from it.

Graaff-Reinet and other towns under the municipality now depend on underground water.

“Phase 1 of the [scheme] was completed in August 2020. Phase 2 is under way and includes the refurbishment and equipping of old boreholes and the drilling of new ones; the construction of the new Umasizakhe pipeline (gravity and rising main), and bulk meter installation,” said Ratau.

He said the funding allocation for the project was split over several financial years, starting in 2016 when work on the supply scheme project began.

“About seven weeks ago, we spent 10 days without water, but now it is better. We were struggling to cook, wash our clothes or even flush toilets.”

Finnis said they had to fill buckets and basins with water.

“The trucks that are carting water are not delivering to all the areas and we spend days without seeing them,” she said, adding that the tankers never even went to some areas.

“When I asked, I was told that the pipes in the borehole don’t reach the water. This week things are better as we got water yesterday and there is a pump that has been fixed,” said Finnis.

She said residents have resorted to buying water.

“The municipality must make a plan to have this problem fixed because we can’t live without water,” she said.

“The local office promised to not close taps entirely and fully open them earlier the next day… The demand provision controls is the problem and also the general issue of not handling leaks adequately,” he said.

“Only two trucks serve the whole Dr Beyers Naude municipality. Many times when the water is already out, communities wait 12 hours before the first truck arrives. This is a problem for women with babies… people who can’t afford to buy water, and especially on sunny days when the Karoo is at its hottest.”

He said when carting does take place, there are no schedules to inform communities.

“So many times, people miss the truck. Load shedding and infrastructure theft and vandalism worsen an already bad situation. Community WhatsApp groups are used to disseminate information… unfortunately, the majority of communities are not on social platforms.”

“The Nqweba Dam in Graaff-Reinet is at 6.13 % and the Klipfontein Dam in Klipplaat is sitting at 15%. In Graaff-Reinet, there has been no water extraction since dam levels reached 10% in April 2021,” Abader said.

“Water carting is being carried out to the areas affected. There is rationing of water in Steytlerville and Willowmore and a rising main is connected to the Umasizakhe pipeline to ensure there is sustainable water supply.”

Abader said the water problem in the municipality was drought-related.

“Current demand exceeds the supply in all towns… except Nieu-Bethesda and Rietbron. The municipality is still facing drought challenges which negatively affect the supply of water to many areas.

“The DWS, SANParks, Cooperative Governance and Traditional Affairs and the Sarah Baartman District municipality assisted with the provision of water tanks and trucks in areas affected by the water interruptions,” she said.

Abader said a drought mitigation plan had been submitted to Cogta and approved by the council in 2021.

“Load shedding in the absence of generators, vandalism and theft of municipal assets are negatively impacting supply. The municipality is doing awareness campaigns and encouraging consumers to conserve water,” she said. DM/OBP