End to mask mandate in SA may be around the corner 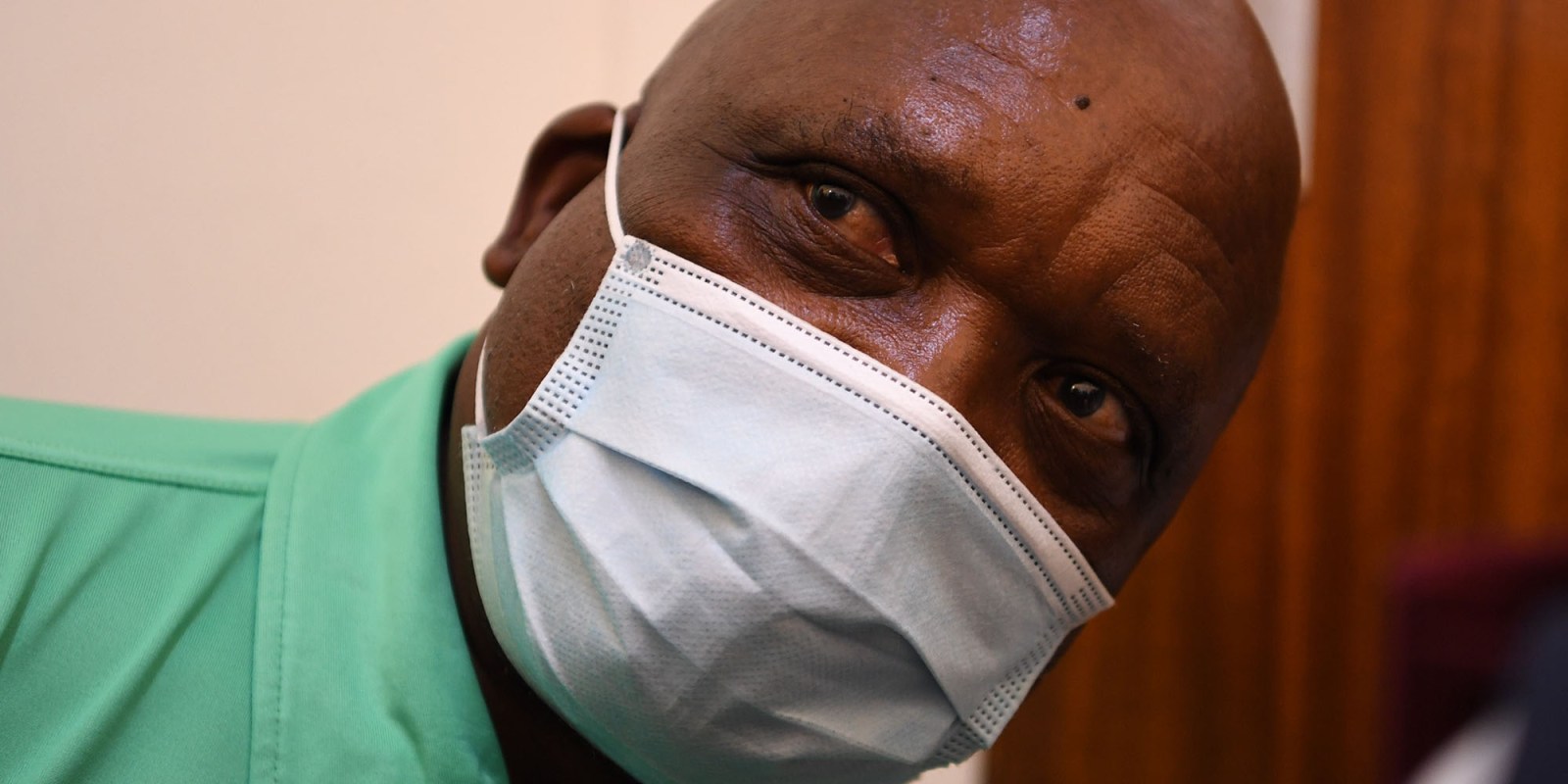 A ‘leaked’ letter, ostensibly written and signed by the Minister of Health, Dr Joe Phaahla, has indicated his intention to ask Cabinet to drop the country’s mask mandate and restrictions on gatherings and ports of entry within the next 72 hours. While his spokesperson went from very cagey to less cagey about the letter in the course of the morning, the timing of the letter corresponds with a court order to force the Minister to account on the legality of the regulations with the threat of a punitive cost order.

A letter signed by the Minister of Health, Dr Joe Phaahla, has indicated his intention to ask for the country’s regulations that enforce the wearing of masks to be dropped along with restrictions on gatherings and travel requirements for South Africa.

But the letter comes as, according to the Department’s legal advisor, parts of a legal record indicating that the Minister was advised against promulgating certain health regulations, were “accidently” sent to litigants trying to have these regulations overturned. These records have now been deleted but they have already been downloaded by Sakeliga’s attorneys.

It is understood that Phaahla intends to call a press briefing on the matter on Thursday but that the regulations remain in place for now.

Phaahla wrote in the letter that at the time when these regulations were promulgated (4 May) the state of the Covid-19 pandemic in the country was “concerning” and “unpredictable” with cases having spiked in a matter of less than a month (between April and May) from 250 a day to 4,693 a day. He added that, at the time, there was considerable uncertainty if there was a new variant around or if sub-variants of Omicron could cause such a spike in new infections. 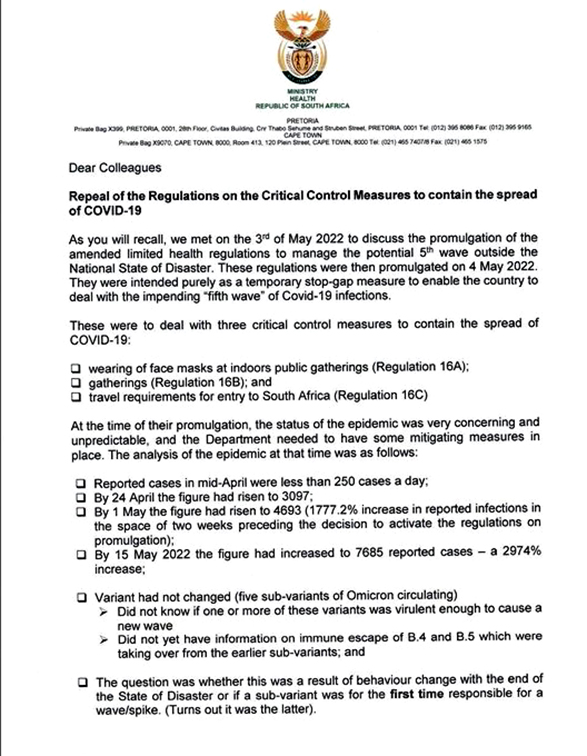 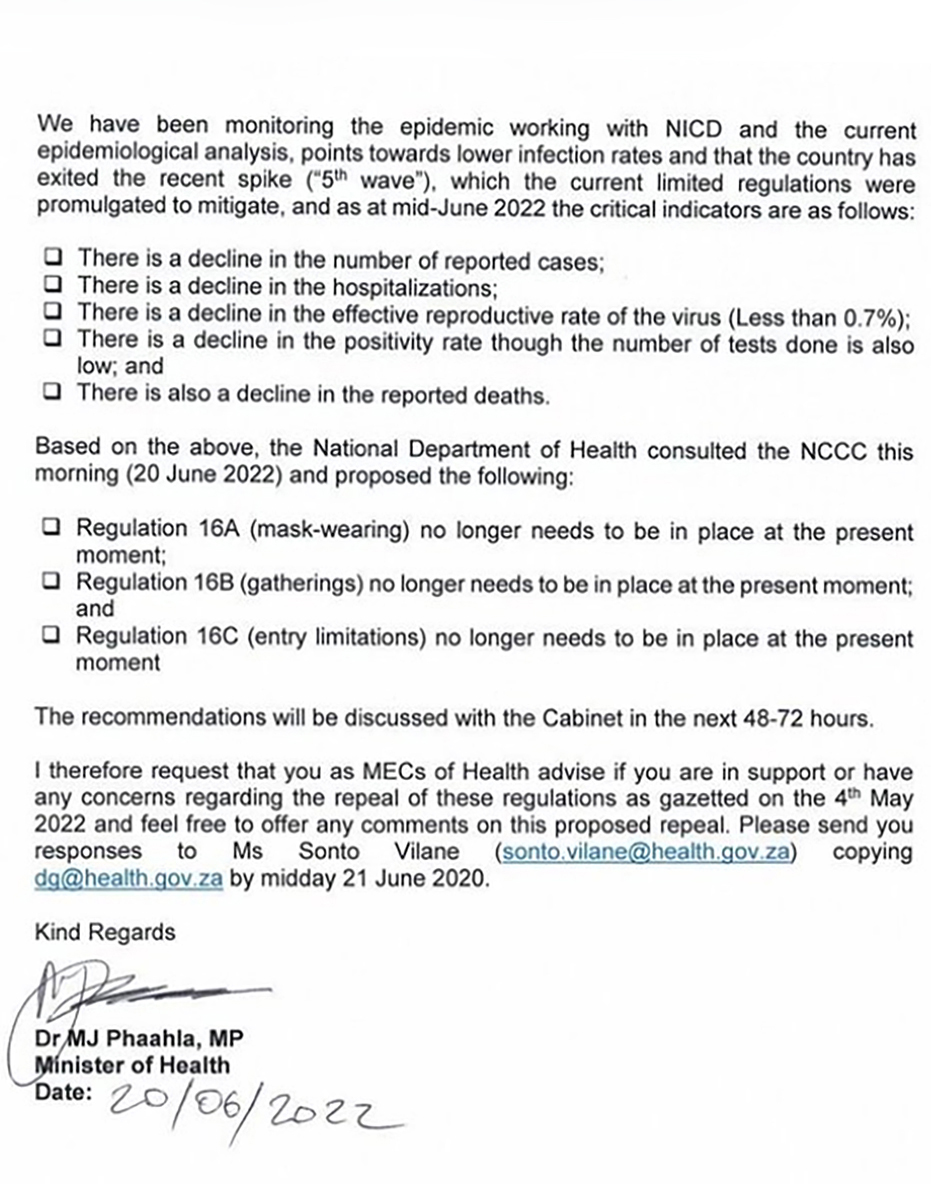 Phaahla continued in his letter that given the current situation — a marked decline in new infections, hospitalisations, reported deaths and positivity rate — he wished to propose that mask-wearing and restrictions on gatherings and travel requirements no longer apply. He has asked the country’s MECs for Health to comment on the letter by this afternoon (21 June).

The Minister is facing litigation about the regulations later this week. One of the applicants in the application to have the health regulations reviewed and set aside, is Sakeliga.

The organisation’s CEO, Piet le Roux, said while they haven’t been able to confirm the authenticity of the correspondence, the letter corresponds with the timelines set down by the court as the Department asked for a postponement to deliver their answering affidavits.

“We think they are trying to stay out of court,” Le Roux said.

He said the department had not delivered their papers in time and had asked for the matter to be postponed to Wednesday.

“Our thinking is that this is why the Minister has asked for comment by this afternoon.

“The Department is litigating with double mala fides. First, they pretended to take comments on regulations seriously. Now it looks like they are trying to amend the regulations to stay out of court,” he said.

“They are using the timelines set by the court,” he said.

“We are concerned that the letter indicates that the Minister wishes to avoid litigation with postponements,” he added.

Phaahla’s spokesperson, Doctor Tshwale, first said he can neither confirm nor deny the document, as “I have not had sight of it (despite one being attached to the Whatsapp message). I do not want to comment on its origin as it is not officially released to the media.”

When pushed he changed his comment: “Let’s treat it as leaked. It has no standing.”

When asked for comment on Sakeliga’s claim that the Minister is trying to avoid litigation he added: “They may proceed. It is their right to plead.”

The supplementary affidavit filed by Le Roux in the court case alleges that according to legal records (20 gigabytes worth) filed by the Department, Phaahla was advised on both medical and legal grounds not to promulgate the new Covid-19 regulations.

The attorneys of record for the Department then started deleting part of these records saying that it was sent in error and contained confidential legal correspondence. Le Roux said electronic copies of the record were then deleted.

They however intend to rely on the full record as it was sent the first time, he said.

In his weekly newsletter on the state of the pandemic Prof Salim Abdool Karim however emphasised once again that masks really do work.

“It never ceases to amaze me at how so many innovative studies are continuing to generate valuable new scientific findings in this pandemic. You may recall that a few weeks ago, I shared the views of a South African scientist that masks do not work or if they work, they may work elsewhere but not in South Africa. This week, PNAS published an analysis that provides compelling evidence that masks work and work in many different settings across all six continents …

Quoting the latest research, Karim continued: “If there are any doubters out there that masks don’t work in community settings, this is a useful evidence-based approach (attached) to help you carve out your arguments in response. In summary, masks have reduced the transmission of SARS-CoV-2 by 19% overall. Not anywhere near as good as vaccines but the protective benefits of masks are still meaningfully slowing viral transmission.” DM/MC