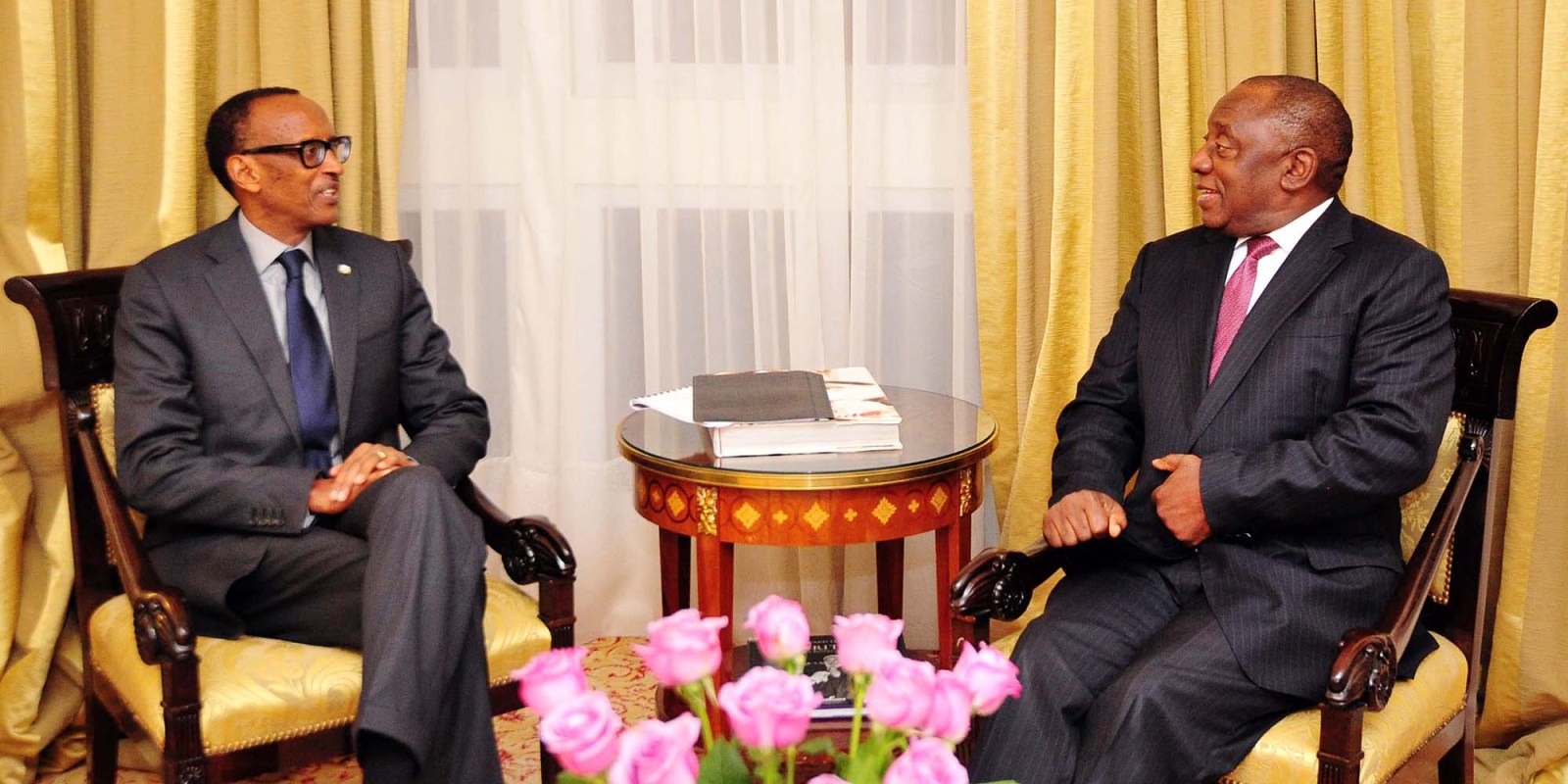 South Africa’s President will not be able to attend this week’s Commonwealth heads of government meeting in Kigali. But his office insists it’s no snub to Rwandan President Paul Kagame — it’s just that his diary is full.

Cyril Ramaphosa’s office insists that the President is not missing the meeting of Commonwealth heads of government this week because of any bad blood with Rwanda, but because he has meetings at home and abroad that he cannot miss.

The big event runs from Monday, 20 June, to Friday, 24 June. It will be attended by Britain’s Prince Charles on behalf of Queen Elizabeth, the titular head of the Commonwealth and UK Prime Minister Boris Johnson, along with many other leaders of the 54-nation group of mostly former British colonies.

Rwandan President Paul Kagame has spruced up the capital Kigali, seeing this as a great opportunity to showcase his country’s relatively successful development.

The official summit agenda will focus on climate change, recovery from the Covid-19 pandemic and the global fallout from Russia’s war against Ukraine. But human rights activists have urged the leaders to press Kagame to stop persecuting his critics.

South Africa has a particular grievance against Rwanda — Kigali’s suspected complicity in the murder of former Rwandan intelligence chief Patrick Karegeya in the plush Michelangelo Hotel in Sandton in 2013 and several assassination attempts in South Africa against former Rwandan army chief Kayumba Nyamwasa between 2010 and 2014.

These provoked Pretoria to expel three Rwandan diplomats, suspected of being involved in those crimes, in March 2014. Kigali retaliated by expelling six South African diplomats.

Kigali claims that Karegeya and Nyamwasa were abusing their asylum in South Africa to try to topple his government by force. The two men, who were among his most trusted confidantes before they fell out, helped found the Rwanda National Congress (RNC).

The opposition group claims it is a legitimate, peaceful political party, but Kigali insists RNC has a military wing based in the east of the Democratic Republic of Congo (DRC) that is conducting an armed struggle against Kagame’s government.

Though Ramaphosa and Kagame agreed on the margins of an African Union summit in Kigali in 2018 to patch up the quarrel, and a joint committee is trying to do so, this has not quite happened yet.

The normalisation process has been complicated by the revelations of international investigative journalists last year that Ramaphosa’s cellphone had apparently been hacked by Rwanda, using military-grade Pegasus spyware which Kigali had bought from NSO, an Israeli cyberintelligence company that has sold Pegasus to several governments.

Ramaphosa’s spokesperson, Vincent Magwenya, told Daily Maverick these issues had nothing to do with the President’s decision not to attend the Commonwealth summit.

He said the President’s week was already full of events he could not miss:

“So the timing is not great for the Commonwealth heads of government meeting,” Magwenya said. “It’s not for any other reason but that.”

He insisted that all of these meetings were necessary. For instance, he said, having already attended the funerals of other monarchs such as amaZulu king Goodwill Zwelithini and baPedi king Victor Thulare in 2021, Ramaphosa would cause offence if he did not attend Sigcau’s funeral.

Magwenya added that Ramaphosa was obliged to attend at least the opening or the closing of all ANC regional conferences and had done so at all of them so far this year. In the “highly charged” political atmosphere, this was especially important.

The Commonwealth’s decision to hold the summit in Rwanda has been criticised by some human rights activists and coincides with events that may focus unfavourable attention on Kagame’s government.

Last week, a series of legal challenges by the European Court of Human Rights and British courts halted the first flight of asylum seekers from the UK to Rwanda for processing of their asylum applications there.

The deal between the UK and Rwanda, which is intended to discourage asylum seekers from going to Britain, has been widely criticised on humanitarian grounds.

The summit will also take place against the backdrop of fast-rising tensions between Rwanda and its western neighbour, the DRC, which has accused Kigali of once again providing military support for the M23 rebel group that has recently resurfaced in eastern DRC.

DRC President Félix Tshisekedi last week accused Kagame’s government of backing the M23 in order to occupy his country and to plunder its mineral resources.

He called on Johnson to leverage Britain’s asylum-processing deal with Rwanda to persuade Kagame to stop supporting the M23.

The DRC has already stopped the national carrier RwandAir from flying to the DRC and has cancelled some diplomatic agreements. Kigali has denied the charges and has advised the DRC to resolve what it calls a “domestic” issue.

They called on Commonwealth leaders to use the summit as a platform to urge Rwanda to take concrete steps to respect and promote the values enshrined in the Commonwealth Charter and the Commonwealth’s Harare Declaration, which pledged the organisation to increase its commitment to human rights and democracy.

“The silence of the Commonwealth on Rwanda’s human rights record risks undermining the organisation’s human rights mandate, as well as its integrity and credibility,” the letter said.

The letter noted that when Rwanda — which is not a former British colony — became a member of the Commonwealth in 2009, “the Commonwealth Human Rights Initiative voiced concern that the state of governance and human rights in Rwanda did not meet the Commonwealth’s standards.

“Many of these concerns remain today. Commentators, journalists, opposition activists, and others speaking out on current affairs and criticising public policies continue to face abusive prosecutions, enforced disappearances or have at times died under suspicious circumstances.”  DM