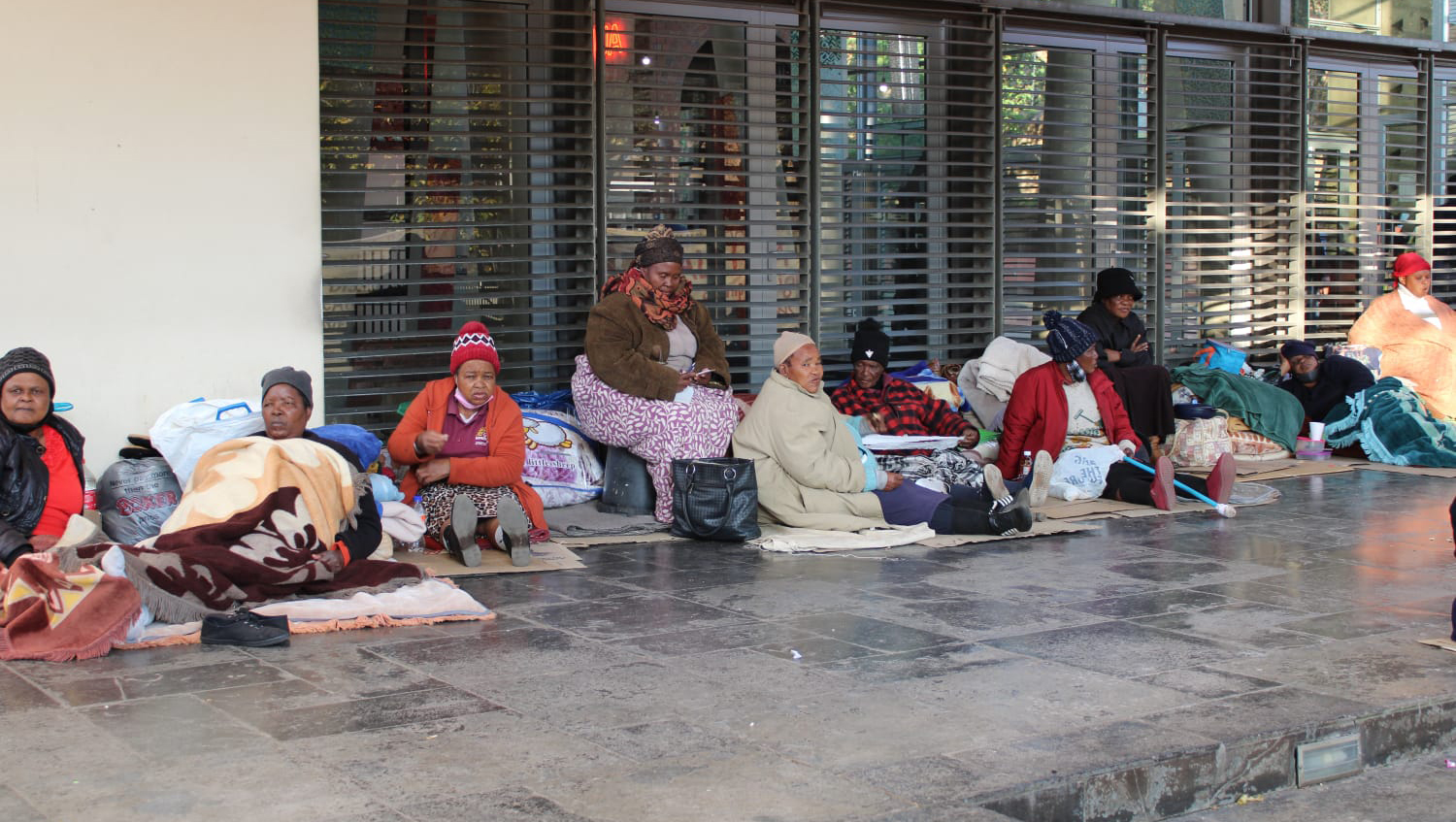 About 90 pensioners sleeping outside the Constitutional Court in Johannesburg in May. They are demanding to be paid reparations for human rights violations under apartheid. (Photo: Kimberly Mutandiro)

‘Government should heal our wounds and give us compensation’ says apartheid victim.

About 90 pensioners have been camping outside the Constitutional Court in Johannesburg intermittently for a year now. They are demanding reparations for human rights violations under apartheid.

The group are members of the Galela Campaign and Khulumani Support Group. Khulumani was set up to represent and support over 100,000 victims of apartheid crimes and their families.

Most of those who slept outside the court come from Tokoza, Soweto, Thembisa, Kahlehong and parts of the Western Cape where there was intense violence between 1990 and 1994. According to the Truth and Reconciliation Commission’s (TRC) report, incidents in those volatile areas included “train violence, taxi violence, conflict between township residents and hostels, and between ANC self-defence units and IFP self-protection units” which resulted in many deaths and injuries.

The group of elderly protesters believe that their R1.7-billion compensation fund is sitting in the President’s Fund and not being paid to victims of apartheid violations as intended.

For three weeks ending in May, the group slept at Constitutional Hill but had to abandon their protest because some of the elderly members became sick due to the cold weather conditions. During this period, they were visited by a delegation including Justice Minister Ronald Lamola. But the group said no clear answers were given about when or how the reparations would be paid and vowed to camp outside in protest again.

Zonke Dlimba from Sprait said families want the government to fulfil the promises made to them by politicians. She explained that her father had been shot dead on a train and her brother was still missing. This, she said, was in addition to the trauma of being forcefully removed from her family home.

“I’m tormented about what happened to my father and brother in the early 90s. At least if we had our family home I would find comfort because that’s where all of us lived. Government should heal our wounds and give us compensation,” Dlimba said.

Thabo Daniel Shabangu told GroundUp that he was shot on his way out of Thokoza Stadium in 1990. He was among hundreds who gathered at the stadium that day at a meeting called by a civil organisation over some of the discriminatory practices of the apartheid regime.

He said he still has the bullets lodged in his body. He is sickly and needs help to fund his medical care. His application for reparation was not approved.

Members of the Galela Campaign wrote letters to the Presidency in May, asking for their reparations to be fast-tracked. They are still waiting for a response.

According to the group, only 22,000 of the more than 100,000 applicants have, to date, been verified as victims of apartheid eligible for reparations by the TRC. The members said that of the 22,000 verified victims, about 17,400 were actually paid. They received R30,000 per victim as a once-off payment instead of getting the R126,000 over six months as the TRC had previously recommended.

Besides once-off payments, they were promised non-cash benefits like educational and medical benefits, which many did not receive.

The Galela Campaign claims that the money in the President’s Fund, established in 1995, should be paid to victims in cash and through other benefits. It has also asked the state how much money remains in the Fund. “Without more information, we cannot know if all the money in the Fund and the profits made from that have indeed been spent on reparations for apartheid-era victims.”

Khulumani’s Judy Ann Seidman said that they have now partnered with the Foundation for Human Rights, Centre for Applied Legal Studies and the Legal Resources Centre. The organisations are considering legal action should the matter remain unresolved. “We are concerned that taking the matter to court may take years. This is a fallback position if the government continues to refuse to deal with failed reparations,” Seidman said.

The victims also want the president and Parliament to amend Section 40 of the Promotion of Unity Act to consider those excluded in the previous reparation processes.

Department of Justice spokesman Chrispin Phiri confirmed that the Minister and other officials had visited the group in May. He said the group camping outside had “suffered from factions which made it difficult to engage with them”.

In letters given to the group, which we have seen, the department apologised for delays in attending to the group’s questions. The department again told the protesters that only victims approved through the Truth and Reconciliation Council would have access to reparations.

“The department is obliged to implement the decisions of Parliament and has not received any mandate to deviate or to amend the Act, as would be required if the process [to approve new beneficiaries] were to be reopened,” the letter states.

The state has requested that the organisations provide a list of names of people who may not have received reparations in accordance with the regulations. DM