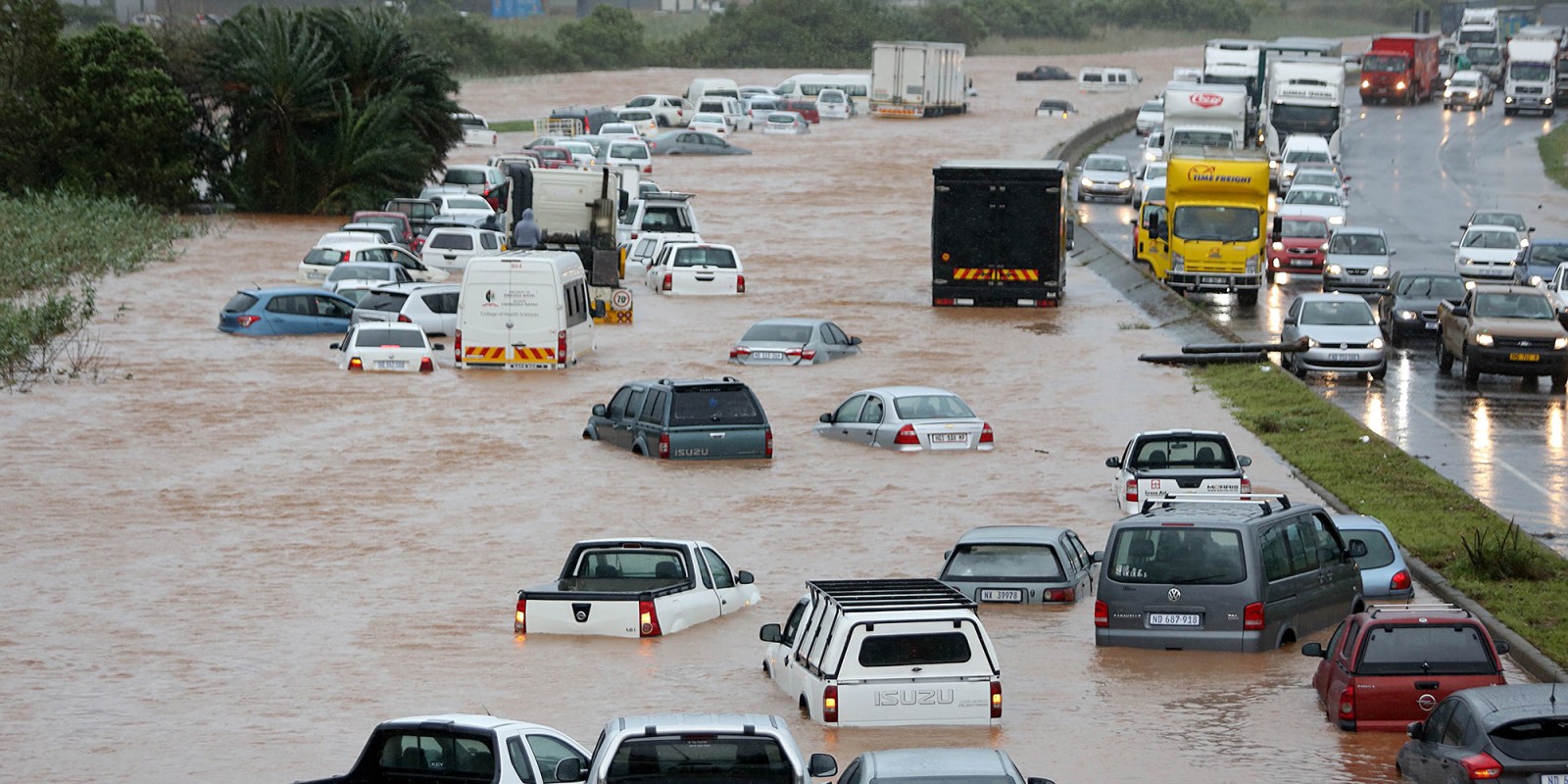 Cars are seen semi-submerged on the road during severe floods on 10 October 2017 in Durban, South Africa. (Photo: Gallo Images / The Times / Thuli Dlamini)

Professor Emeritus of Hydrology at the University of KwaZulu-Natal’s Centre for Water Resources Research argues that not just heavy rain and climate change were responsible for the devastation in Durban and other provincial areas.

Given the devastating impact of the “rainbombs” that struck Durban and other parts of the KwaZulu-Natal coast in April and May, it’s no surprise that several commentators have described the recent floods as the worst in living memory — and also linked them to the global climate crisis.

Yet, contrary to popular perception, detailed historical analysis suggests that the KZN coastline has experienced many similar events over the past 170 years — some of them significantly worse in terms of the volume or intensity of rainfall (see historical details further below).

While the jury is still out on the extent to which the April/May 2022 weather events were driven by human-induced climate change, one of South Africa’s most senior hydrology researchers suggests that it is equally important to interrogate and address the wide variety of “human factors” that aggravated the severity and human death toll of the most recent floods.

Roland Schulze, Professor Emeritus of Hydrology at the University of KwaZulu-Natal’s Centre for Water Resources Research, says the rapid and widespread expansion of human settlement and industrial development around Durban has created vast new areas of hard, impervious surfaces which exacerbate the erosive power of floodwaters.

Whereas larger areas of grasslands, gardens and undisturbed natural vegetation once helped to absorb or disperse floodwaters, the almost wall-to-wall covering of concrete, brick paving or tarred roads in some parts of the city has promoted faster and more intense water channelling and scouring.

Due to the lack of strict planning controls on where to build or how to build, several informal homes had been built in vulnerable floodplains. In other places, homes were built on steep slopes (often with unstable soils) or without adequate foundations.

Schulze also suggests that the proliferation of shallow-rooted alien plants along river courses was a further contributing factor. Quoting research by eThekwini municipality civil engineer Geoff Tooley, he noted that these shallower-rooted plants were washed away more easily than slower-growing and deeper-rooted indigenous vegetation.

As these plants were uprooted, the exposed soils were washed away rapidly, with alien plant debris and growing volumes of litter adding to the blockage of stormwater culverts.

How did the 2022 floods compare with previous storms in KZN?

Between 9 and 12 April, Durban and other parts of the KZN coastline were hit by three days of very heavy rain due to a cut-off low-pressure system.

The heaviest rain (more than 300mm) fell on 12 April on to already saturated soils due to the preceding two days of rainfall between. By the fourth day, Virginia Beach in Durban had measured an accumulation of 411mm while Pennington measured 464mm.

Just six weeks later, there was a “double-blow”, when the coast was struck by further heavy falls of between 160mm and 240mm over consecutive days (21 to 22 May).

Dramatic as they are, these falls have been exceeded several times since rainfall collection records began from the 1850s onwards.

To compare the severity of the recent floods, Schulze extracted data from a variety of sources, including a South African Weather Bureau document titled “A History of Exceptional Weather Occurrences in South Africa: 1500-1990” (which Schulze translated from Afrikaans to English).

Schulze also notes that similar heavy rains fell over the KZN coast in May 2017, November 2019 and November 2020, but does not elaborate on the rainfall volumes recorded during these events.

Why are comparisons important?

Schulze says that — devastating as it was — April 2022 had to be seen in the context of previous similar floods and storms.

The scale of devastation had prompted senior government and state-linked officials (including President Cyril Ramaphosa) to suggest “unequivocally” that climate change was behind these floods.

“A key question is whether such statements and sentiments related to climate change are backed up with certainty by science, especially when scientific experts at the South African Weather Service, commenting on this particular April 2022 cut-off low-pressure system, could not with any ‘quantifiable precision’, attribute it to climate change.”

Further questions that arose were “whether rainfalls and associated floods of the magnitude of the ones in April 2022 are necessarily related directly to climate change, or whether statements such as those above are signs of conveniently jumping on to the climate change bandwagon by blaming climate change for possibly unrelated naturally occurring disasters, or by using climate change for either political expediency, point-scoring, or to hide shortcomings of own governance, or possibly out of sheer ignorance of KwaZulu-Natal’s flooding history?”

It is worth stressing at this point that Schulze is by no means a climate change sceptic.

In fact, Schulze has been researching climate change since the early 1990s and was a lead author or contributor for two United Nations Intergovernmental Panel on Climate Change (IPCC) expert reports.

He was the recipient of the SA Institute of Agricultural Engineers Gold Medal for “outstanding contributions to hydrology in SA”; he has advised the Dutch government on how to adapt to climate change and also served on the International Commission on Irrigation and Drainage working group on global climate change and irrigation.

The search term “climate change” pops up more than 600 times in his CV, which lists the research projects he, his colleagues and students have been involved in.

As real as climate change is, and as severe as the recent Durban floods were, Schulze says historical records kept since the 1850s show that “there have been many rainfall events far exceeding the magnitudes of the 2022 flood” for single and for multiday accumulated rainfalls. Compared with some past events, rainfall intensities in the April 2022 rains were “generally quite low, and by anecdotal accounts much higher rainfall intensities have been experienced many times in the past”.

To learn lessons from the 2022 floods and to prepare for the more frequent and severe weather events predicted by global climate modelling, he suggests that solutions should include:

In a paper to be submitted to the Transactions of the Royal Society of South Africa, he says: “Given the above findings from the history of flood producing rainfalls in KZN, this writer — although a proponent of dire consequences which climate change may have on hydrological events because of the non-linear responses of runoff to changes in rainfall, and with a long list of publications since the 1990s on potential climate change impacts — at this point in time urges caution to place the cause of the 2022 KZN flood producing rainfalls unhesitatingly on climate change.” DM/OBP