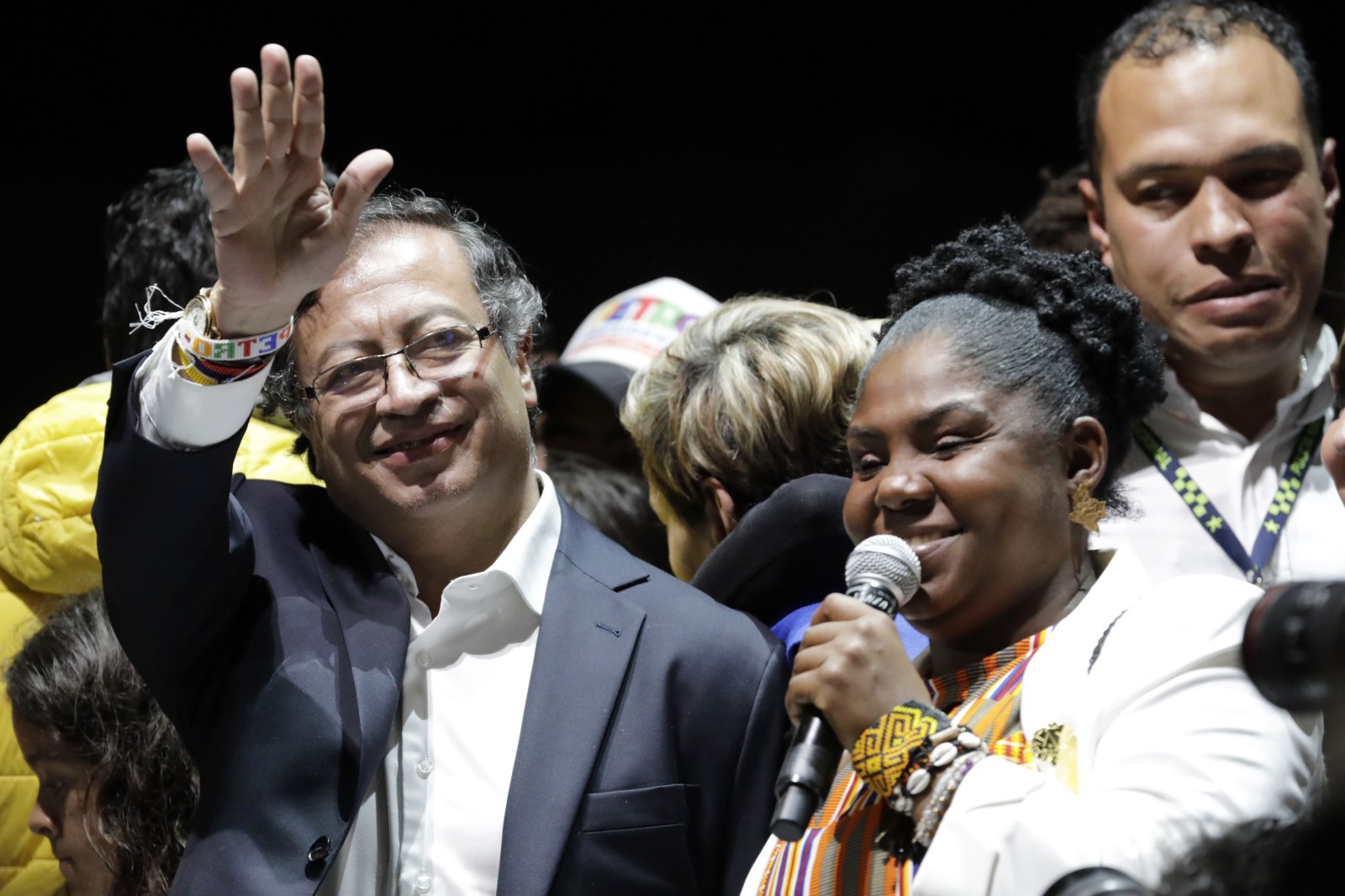 The elected president of Colombia Gustavo Petro (L) waves to supporters while accompanied by Francia Marquez (R), elected vice president, after the release of election results, during an event in Bogota, Colombia, 19 June 2022. Colombians elected Gustavo Petro as the new president of the republic for the period 2022 to 2026. EPA-EFE/Carlos Ortega

(Bloomberg) --Colombia is bracing for the prospect of a radical change in economic and political direction after electing a former guerrilla to the presidency on a platform of transforming the country’s business-friendly model.

Gustavo Petro, 62, defeated construction magnate Rodolfo Hernandez in Sunday’s runoff vote, giving him a shot at enacting a program that includes plans to tax big landowners, halt the awarding of oil exploration licenses and revive ties with the socialist government of neighboring Venezuela.

Petro took 50.4% to 47.3% for Hernandez, according to Colombia’s election authorities. He assumes office on Aug. 7 along with his running mate, Francia Marquez, a 40-year-old environmental activist who will become the country’s first Afro-Colombian vice president.

“Real change is coming,” Petro said in a victory speech in Bogota. “This is another Colombia.”

Other major Latin American nations including Brazil, Mexico, Argentina and Venezuela have all elected leftist leaders at various times, but Colombia has until now only ever been governed by conservatives and liberals. Petro’s election is also likely to shake up relations with Washington in a country that has for decades been the region’s strongest US ally.

He is mistrusted by many investors, especially since his plan to gradually phase out oil and coal would deprive the nation of about half of its export revenue. On top of reforming the pension and health-care systems, Petro also wants to protect local farmers and industry using import tariffs, and renegotiate trade agreements, a radical shift for a country that has liberalized commerce in recent decades.

But it is unclear how much of his agenda he’ll be able to implement given that he and his allies lack a majority in congress.

Colombia’s strong institutions will provide checks and balances: The constitutional court may block some of his plans, while the central bank’s independence is enshrined in the constitution. He reached out to centrists during the latter stage of the campaign, alleviating some market fears.

Investors will be watching for guidance on who is appointed to the Finance Ministry and the rest of his economic team, according to Ana Vera, chief economist at Panama-based IN ON Capital.

“We expect more volatility in local markets and the weakening trend of the peso would continue,” she added.

Markets are closed on Monday for a public holiday and will reopen Tuesday.

Colombia now joins the ranks of nations worldwide that have voted in anti-establishment leaders. In Latin America, the demand for an alternative resonated as the pandemic caused a spike in poverty that’s been compounded by inflation at multi-year highs. In Peru, a school teacher from a Marxist party became president, while Chile elected a former student protest leader earlier this year.

Colombia, by contrast, has for decades been a bulwark of conservatism, so Petro’s win shows it is undergoing “a deep transformation in political values, in political expectations,” said Andres Mejia, a political consultant who teaches at the business school of Bogota’s Andes University.

With his platform, Petro harnessed a desire for renewal fueled by inflation that’s accelerated to its fastest pace in more than two decades, and corruption scandals that have undercut support for the nation’s traditional ruling class under Ivan Duque, the outgoing president. He promised that Colombia would lead the fight on climate change.

Still, the most likely scenario for Petro is that he becomes a Duque 2.0, said James Bosworth, the founder of Hxagon, a political risk analysis company that covers emerging markets.

“He’s someone who comes to office with lots of promises and then fails to deliver,” Bosworth said, citing Petro’s lack of a congressional coalition, his leadership style, “and the massive geopolitical winds of recession and high inflation that are playing against him.”

Investors preferred his opponent, Hernandez, with the peso soaring as the 77-year-old businessman became the favorite after the May 29 first round. But his campaign was then damaged by gaffes and scandals, and was further undermined by his lack of a concrete program beyond a focus on tackling graft. His concession speech lasted one minute, during which he urged Petro to “be true to his anti-corruption discourse” and not let down his supporters.

The International Monetary Fund forecasts growth of more than 5% this year, the fastest pace among major economies in the Americas. Even so, nearly half of Colombians believe conditions are getting worse, according to a recent poll by Gallup.

Colombia is one of the closest allies of the US and has received about $13 billion in US aid since 2000, according to the Washington Office on Latin America, an NGO. Secretary of State Antony Blinken issued a statement saying the US looked forward to working with the president-elect to further strengthen ties.

Still, Petro’s election is likely to destroy the bi-partisan consensus under which Democrats and Republicans backed military cooperation and joint efforts to fight illicit drug trafficking, according to Sergio Guzman, director of Colombia Risk Analysis. “The Republicans are going to be very reticent about approving funding for Colombia,” he said.

Petro was a member of an illegal guerrilla group in his late teens and twenties. After demobilizing as part of a peace process, he entered politics, first winning a seat in congress then eventually becoming mayor of Bogota. He has a net worth of about $59,000, according to his 2020 tax return, which he posted on Twitter.

His other proposals include offering jobs for anyone who wants one in the public sector, and reforming the health system to give the state more of a presence.

The result is “great uncertainty for the country and for the Colombian economy,” said Jorge Restrepo, director of CERAC, a Bogota-based political research group. “This is uncharted territory.”