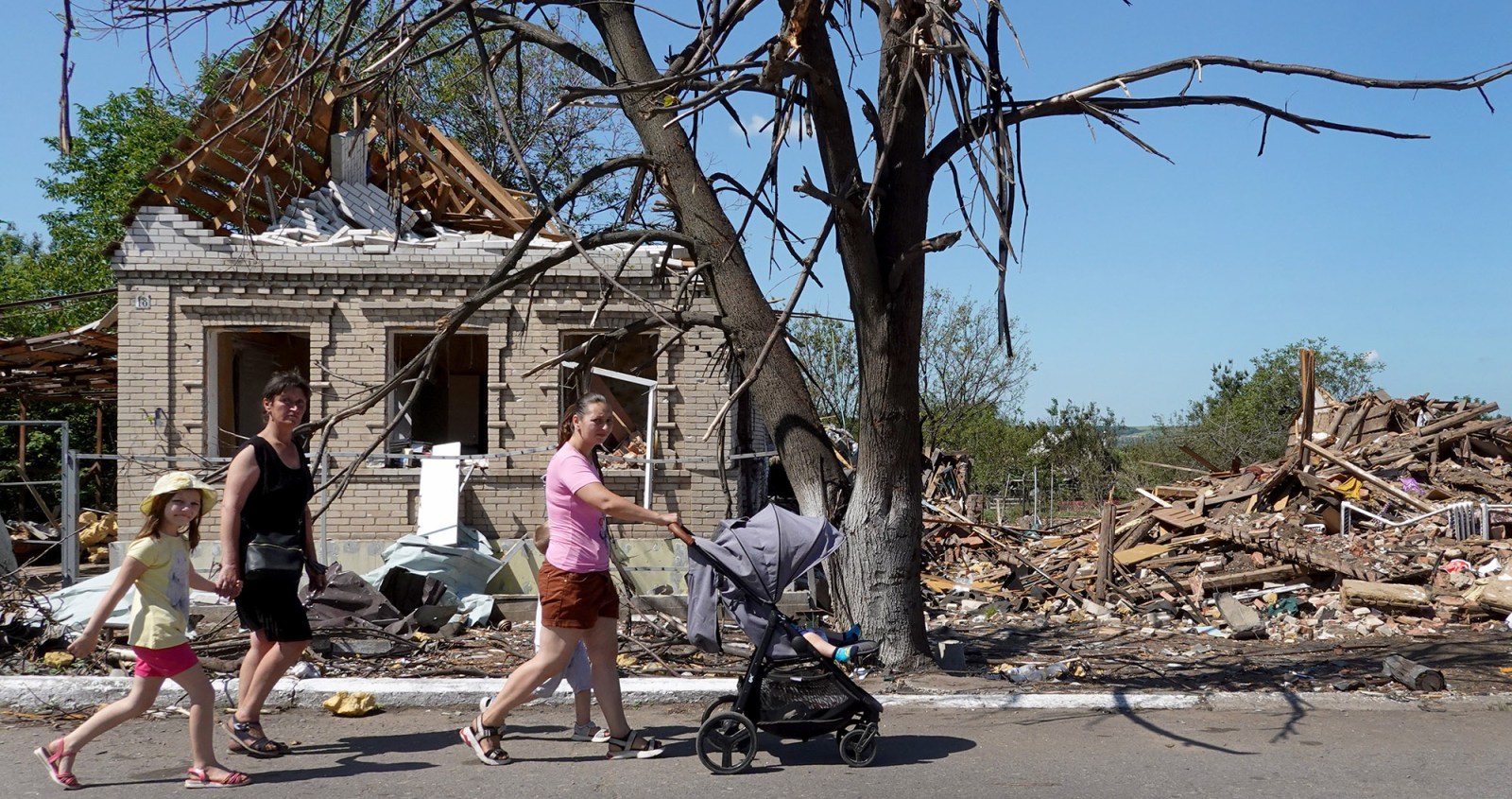 A family takes a Sunday walk through a neighbourhood damaged by a Russian missile strike on 19 June 2022 in Druzhkivka, Ukraine. In recent weeks, Russia has concentrated its firepower on Ukraine’s Donbas region. (Photo: Scott Olson / Getty Images)

Russia has claimed a missile strike hit Ukrainian military commanders, while Ukraine warns that the Russian invasion might shrink its grain harvest by more than 40%.

Russia said it hit military targets in Ukraine with sea-launched cruise missiles, including a strike on a planning meeting of Ukrainian commanders.

Ukraine warned its grain harvest may shrink by more than 40% this year because of Russia’s invasion. President Volodymyr Zelensky said Ukraine “will do everything possible” to ease a global food crisis as long as it can get security for vessels to enter its ports. Amid international efforts to reach a deal, harvests are getting under way with silos still loaded with last year’s crops.

The war “could last for years”, Nato Secretary-General Jens Stoltenberg told Germany’s Bild am Sonntag, saying the military alliance “must not let up on supporting” Kyiv. The new head of the British Army said his troops must be ready to “fight in Europe once again”, The Sun newspaper reported.

While the industry is Germany’s single biggest natural-gas consumer with a 15% share nationally, it isn’t facing acute supply problems yet, VCI said in a statement.

Ukraine says harvests may slump by 43%

Ukraine’s harvest may decline to 60 million tons of grain and oilseeds this year, a 43% slump compared with 106 million last year, because of Russia’s invasion and occupation of territories, Deputy Agriculture Minister Markian Dmytrasevych said in a TV interview.

Ukraine has exported only four million tons of grains and oilseeds since Russia started the war in late February and blocked Ukrainian ports, Dmytrasevych said. That’s compared with usual monthly shipments of five million tons to six million tons via ports, he said. The government sees a chance to accelerate exports by truck if the European Union eases documentation for them.

Other strikes destroyed M777 howitzers and armoured combat vehicles in the southern city of Mykolaiv, while air-launched missiles struck Ukrainian positions in the Dnipropetrovsk and Donetsk regions, Konashenkov said. Russia also fired Iskander and Tochka-U ballistic missiles at targets in Kharkiv and in Luhansk region.

It’s critical to build a military “capable of fighting alongside our allies and defeating Russia in battle,” General Patrick Sanders, the new head of the UK Army, wrote in a message to his soldiers, according to The Sun.

“We are the generation that must prepare the Army to fight in Europe once again,” said Sanders, who took over as Chief of the General Staff on June 13.

Russia’s Gazprom will deliver gas volumes in line with previous quantities, Italy’s Eni SpA said on its website. The Russian supplier notified the company on Friday it would receive only half of what was requested, according to Eni.

Earlier, the Gestore Mercati Energetici said Eni’s gas supply to Italy from Russia for 19 June had been only “partially confirmed.” The current supply of gas is higher than demand, and more is coming from Algeria thanks to new contracts, Eni chief executive Claudio Descalzi said on Saturday.

The German government is taking measures to bolster gas storage levels amid a worsening of the market situation in the past few days, Economy Minister Robert Habeck said in an emailed statement.

“Security of supply is currently guaranteed. But the situation is serious,” Habeck said, adding that gas consumption must fall further and more supplies sent to storage facilities “otherwise things will really get tight in the winter”.

Germany’s gas storage levels rose to 57.03% from 56.67% yesterday, the Federal Network Agency said on its website.

From a dramatic loss of export revenue to mine-riddled fields and destroyed machinery, Russia’s invasion has taken a massive toll on Ukraine’s agriculture sector.

With ports still closed, farmers are searching for alternatives to store the growing stockpiles of crops while already worrying about how much they’ll be able to plant for the 2023 season.

The war “could last for years”, Nato Secretary-General Jens Stoltenberg told Germany’s Bild am Sonntag. Delivery of “modern weapons” from the West will enable Ukraine to drive Russian troops out of the Donbas region, Stoltenberg told the German newspaper.

At the Nato summit in Madrid this month, the military alliance will declare “that Russia is no longer a partner, but a threat to our security, peace and stability”, he said. “China will also feature in the paper for the first time. Because China’s rise is a challenge to our interests, our values and our security.”

“We will not give away the south to anyone, we will return everything that’s ours,” Zelensky said in his daily video address. He also pledged that Ukraine will do all it can to ensure grain supplies leave its ports to help ease a global food crisis caused by Russia’s war, once it receives security guarantees through international mediation.

The invasion has triggered what many policymakers warn could be a spiralling food crisis by cutting off shipments of Ukrainian agricultural commodities. United Nations-facilitated negotiations are struggling to make progress, with Ukraine’s Black Sea ports scattered with mines and Russia effectively blocking shipping in the area.

The governor in Ukraine’s Odesa said 39 civilian ships under flags of 14 countries are unable to leave the region’s ports.

Russian President Vladimir Putin’s “imperial design” for conquering Ukraine has been derailed and the UK and other nations must continue providing Ukraine with military and financial aid to ensure it has the “strategic endurance” to prevail in the war, British Prime Minister Boris Johnson wrote in The Sunday Times.

While Putin may believe the West is too “fickle” to hold firm, the clock is “ticking inexorably” against him because Russia is expending troops and equipment faster than it can replace them, according to the prime minister. Finishing the war on terms laid out by Zelensky “should be the definition of success”.

Russian troops shelled a residential block in the town of Seredyna-Buda in the Sumy region near the border with Russia, the Ukrainian Defence Ministry said in an operational update. Mykolaiv in the south was struck by missiles that hit infrastructure and a residential building, and two civilians died during shelling.

Russian forces are shelling areas near the city of Sievierodonetsk in the eastern Luhansk region and fighting continues for full control of the city, according to the ministry. DM