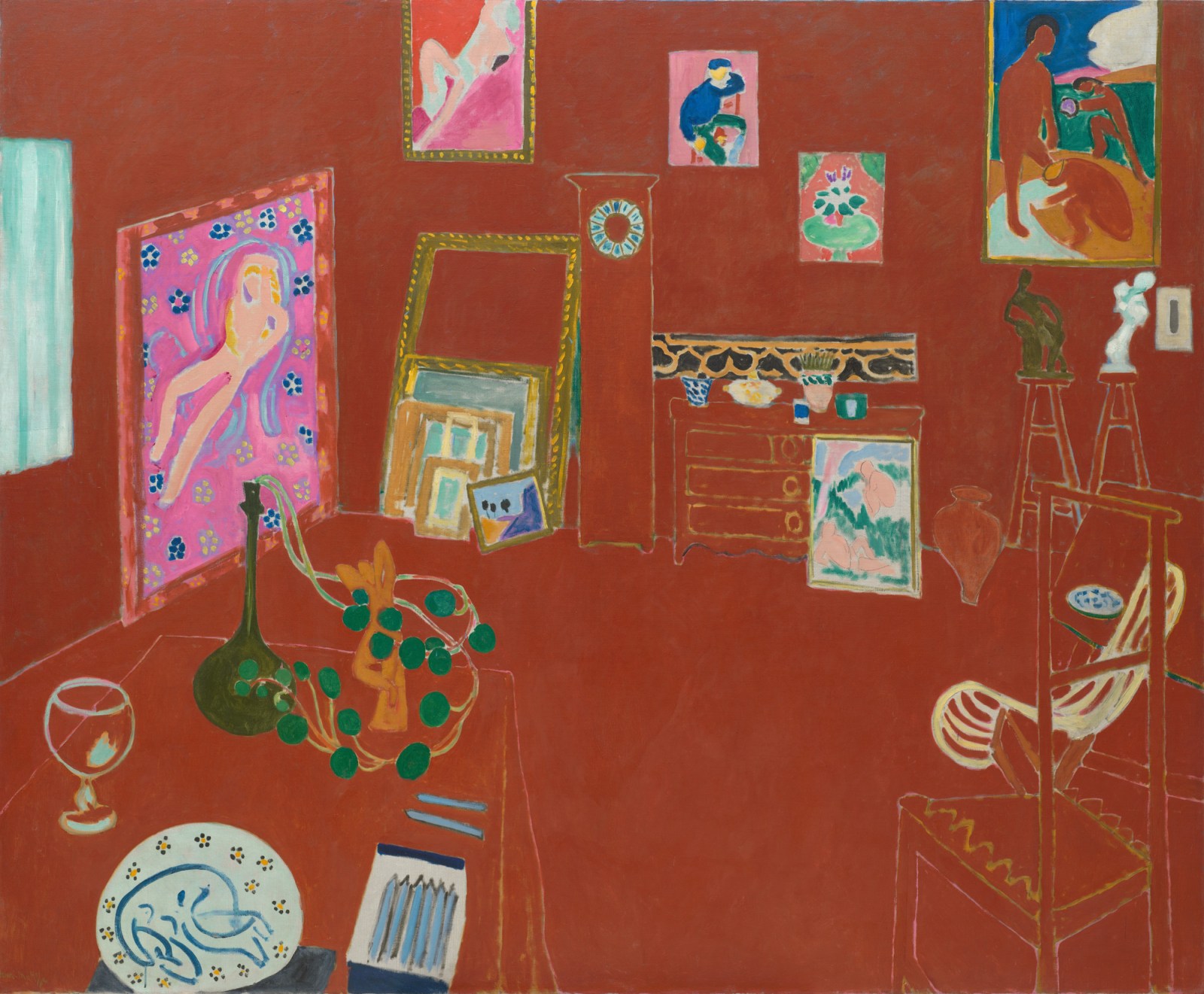 The Red Studio, now at the MoMA. Image: Wikimedia

For the first time in over a century, the MoMA in New York is currently exhibiting Matisse’s painting The Red Studio as part of an exhibition of the same title. Also showing are six surviving paintings, ceramics, and the three sculptures that are featured in the painting.

Although Matisse felt that if words could describe a painting it wasn’t a painting, his comment on The Red Studio is important for two reasons.

Firstly, it indicates that the more cerebral part of the artist’s mind hadn’t quite caught up with the instinct and intuition that generated this threshold painting. It’s also a recognition of how the artist worked. He followed his inner feelings which had no connection with academia and considered the intellectual aspect of his work secondary and not very apparent in his paintings.

And secondly, his comments on The Red Studio provide a vital key to understanding this painting — in the now overused terms  – of “quantum leap” and “paradigm shift”.

At this stage, I feel it’s only fair to point out that sadly I have not seen this work in the flesh, but I have felt its vital charge across the ethers of time and distance. And I am, in the words of activist writer and preacher James Baldwin, driven to respond to its siren call and “go the way my blood beats”. This then is my response, my projection, my reflection on its red pulse, its cry to new life. It’s such a visceral work and so we connect with it physically through the body.

The Red Studio bursts through the stale Renaissance obsession by constructing a believable three-dimensional illusion of the real world on a two-dimensional plane, an approach that ruled for 500 years. The Red Studio flattens perspective — as if to both expose the illusion of 3D surfaces — and in so doing emphasises space. It touches on the void, our physical death and the metaphorical one, the absence of meaning. The painting evokes a deeper, less defined, less accessible, less comfortable reality. One which is closer to the shifting reality associated with quantum physics — even if this was not the purpose of the painting.

Once ranked as one of the five most important works of art by art experts, The Red Studio was painted in 1911. It was painted after a visit to Spain where the artist came into contact with the traditional, non-representational art of Islam. It is part of the “picturesque suite” along with The Pink Studio, The Family Portrait and Still Life with Aubergines so-called for their Middle Eastern decorativeness. These paintings were termed “symphonic interiors” by American Historian Alfred Barr and the first director of MoMA (Museum of Modern Art).

Matisse sent the collector a small, pale, preparatory water colour which was rejected by the collector, who justified his rejection by saying he preferred the painter’s figure work.

1911 was the year when the British physicist Ernest Rutherford discovered the structure of an atom, Roald Amundsen was the first man to reach the South Pole, and the Mexican revolution was escalating. And in the art world, Leonardo da Vinci’s Mona Lisa was stolen from the Louvre Museum. Maybe it has no significance, but I find it interesting that The Red Studio should be exhibited in this particular year, over 111 years later.

On the most fundamental level, the painting concerns the artist’s studio in Issy-les-Moulineaux, a suburb in Paris. It’s a biggish painting, six feet by seven feet — think the average height of a basketball player, with a very big, red presence. It took four mature men to handle it for the exhibition. But The Red Studio wasn’t red, to begin with, but rather a grey/ blue closer to the colour of his studio’s white walls whose ghostly presence still haunts in the fine, ragged outlines barely delineating the architecture and objects of the studio. In the same way that he was unclear as to why he painted The Red Studio, Matisse is reputed to have said “where I got the colour red — to be sure, I just don’t know”.

The plan was to sell The Red Studio to the wealthy collector of much of Matisse’s work, Sergei Shchukin. Matisse sent the collector a small, pale, preparatory watercolour which was rejected by the collector who justified his rejection by saying he preferred the painter’s figure work.

The delicate pink sketch gave no hint of the blast of Venetian red to come. While the colour red is often associated with the intensity (and density) of tooth and claw, Venetian red or ferric oxide, belonging to the hematite or bloodstone family and is an opaque pigment popular with the Renaissance and later masters who mixed it with white for flesh tones. The result is that while the painting certainly invokes the intensity of a red it has more play in its stain-like quality than if it were a solid. Colour of this intensity should wipe out all structure but in fact, in this painting, it draws attention to it.

An inventory of the studio, as featured in the painting, would be a collection of inanimate everyday objects and one organic one. But this is only the base level. What we are really looking at is a self-portrait in studio form.

Something in these attitudes suggested a profound discomfort. The threat of the new, ushering in the terror of the unknown. The Red Studio has all the magnificence, terrifying beauty, awe and sublimity associated with the Romantic movement. The painting is like a massive red panic attack in which one’s bearings are lost; the ego is threatened and the carefully constructed illusory self is at risk of dissolution and disintegration. Death feels nearby.

This is then the genius of The Red Studio. Intuitively and instinctively Matisse has his paintbrush on the pulse of space and time.

It shakes up the old surface reality and ushers in a new reality closer to the particle and wave theory — the super positionality of quantum physics — where one thing can be another at the same time.

As abstract mathematician and Buddhist practitioner Michael Behrens said in the short documentary The Art of Life, “Everything that’s a deep conception of reality is in terms of two things that are opposites that are mutually contradictory. Both need to strike reality. You need both of them to describe reality.” Deborah Poynton, a painter who seduces with intricate jewel-like surfaces, carriers of the absurdity and meaninglessness of the human condition, describes how “the moment there is a single brush stroke on the canvas, the white canvas becomes an infinite space”.

In The Red Studio’s case, the flat red surface and the three-dimensionality of the grey outlines of objects operate simultaneously. The red flatness is emphasised by the outlined objects and in turn, the suggested dimensionality of the objects is emphasised by the red flatness — both at the same time. Matisse’s instinctual leap has conjured up a deeper, more profound reality.

Many regard a genius as being ahead of their time. Instead, it is that they are absolutely of their time and more importantly they are able to express it. This is then the genius of the Red Studio. Intuitively and instinctively Matisse has his paintbrush on the pulse of space and time.

Perhaps the importance of The Red Studio is this. That it seems to possess the properties of a Japanese Zen koan or unsolvable puzzle used to train the chattering monkey mind.

The Red Studio is not a painting to be solved in a tidy way. Rather it is an awakening. There is no one solution, just more questions. It is a layered work that demands that we engage and grapple with it.

Matisse’s The Red Studio’s real power lies in it as a work of contemplation and meditation like the haunting colour field works of Rothko’s which would follow.

And of course, the painting’s ability to hold the ever-expanding ripples of interpretation is the hallmark of a powerful work. DM/ ML