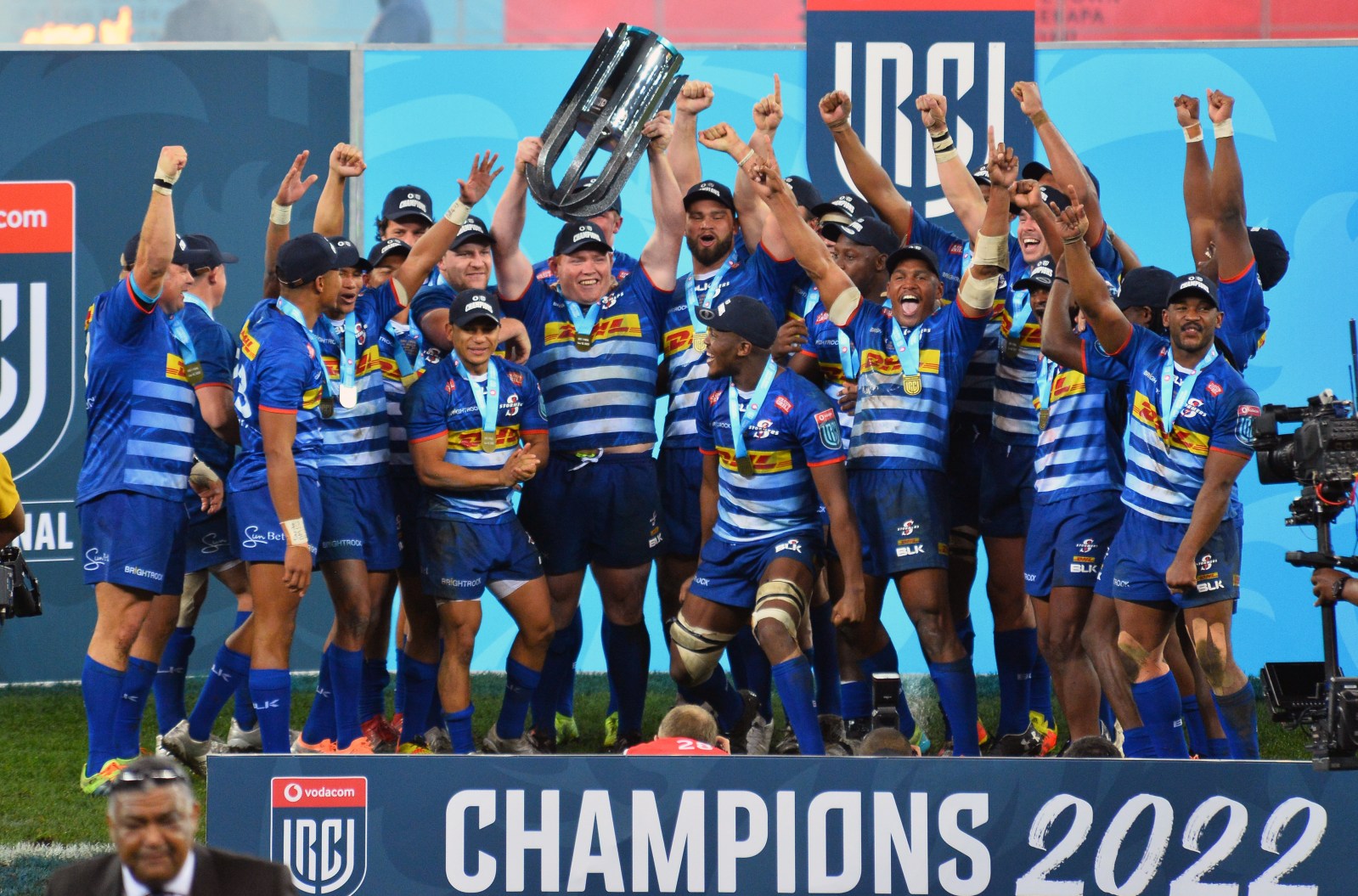 Stormers 18 (3) Bulls 13 (7)
The inaugural United Rugby Championship ended with a final of high tension and drama in slippery conditions
The Stormers staged a come-from-behind heist to win their first ever inter-continental trophy by edging the Bulls at a frothing DHL Stadium on Saturday to win the 2022 United Rugby Championship (URC).
In a season impacted by the global pandemic and played against a backdrop of boardroom drama in Cape Town, that would have sunk most teams, the Stormers delivered a title that was an impossible dream nine months ago.
It was a magnificent second half display from the home team, underlining their credentials as a squad that will simply not lie down and die. They won the semi-final against Ulster with the last move of the game and against the Bulls, despite being second best for the first 40 minutes, they hung in with grim determination and weathered the storm.

Perhaps the never-say-die attitude comes from more than a year of boardroom drama and angst. At one stage players’ salaries were paid late and they never knew if there would be a next week for a union teetering on the brink of financial Armageddon.

The Western Province Rugby Football Union (WPRFU) was placed under administration last September and the Stormers faced a real possibility of collapse. The best script writers could not have come up with a plot like this.

Against a backdrop like that, coming from behind in finals in probably just another day of fighting against the odds for this superb Stormers squad under the leadership of head coach John Dobson.
Second half siege
The Stormers scored 15 points in the second half, which started with a try from the bulldozing No 8 Evan Roos and ended with a cheeky drop-goal from flyhalf Manie Libbok. In between hooker Andre-Hugo Venter scored another try and Libbok added a conversion and a penalty as well.

After being stopped in their tracks in a sloppy first half, the Stormers sharpened up their kicking game after the break and posed far more testing questions of the Bulls. The game opened up with better contestable kicking and the Stormers were always favourites once the match was allowed to breathe following a claustrophobic opening stanza.

The Bulls, like they did a week earlier in Dublin, silenced the home crowd early on. This time it took just three minutes for the visitors to score the game’s opening try through centre Harold Vorster.
The move had its genesis from a lineout drive following the Stormers’ first exit of the game. The Bulls lineout, which has been a weapon all season, functioned perfectly.
After winning the throw and setting the maul, the Bulls, in white, mauled towards the Stormers line. Hooker Johan Grobbelaar, playing like an angry man who had been left out of the Springbok squad last week, which of course he was, peeled off the maul and was stopped just short of the line.

But Vorster was in full pilot fish mode and snapped the ball up and barged over from close range to dampen the party atmosphere enveloping the DHL Stadium.

Although it was the Bull’s only points of the half, they were in firm control for the most part of the opening stanza. Their line speed on defence, which had upset Leinster in the semi-final, flustered the Stormers massively.
When the home team did try to attack, they lacked composure, which was exacerbated by the tight Bulls defence and the sight of spilled passes was a regular feature.
Tactically the Stormers then reverted to kicking. But where it was accurate and decisive in the second half, it was aimless in the first. Deep punting throughout the first half gave the Bulls’ back three ample time to mop up. Canaan Moodie, Kurt-Lee Arendse and Madosh Tambwe often had enough time to hold an indaba about their next move.
The only thing that kept the home side in the match was their excellent breakdown work. Flank Deon Fourie and prop Steven Kitshoff secured four breakdown penalties for the home team, which was enough to stunt the Bulls moments of attack.

In truth though, after the early score the Bulls were content to hold the home side at arms’ length with their smothering defence and superior lineout. The fact that the Stormers’ first foray into the Bulls’ 22-metre came in the 31st minute, underlined their initial plight. They simply could not build enough pressure on to force the Bulls into errors.

A lone Libbok penalty on the stroke of halftime gave the Stormers a small foothold in the match and was perhaps as much as they deserved for their efforts in the first half.
That foothold gradually became a stranglehold as the Bulls’ composure began to crack as the game wore on. Bulls centre Cornal Hendricks was yellow-carded for a high tackle in the 56th minute and from the ensuring penalty and lineout maul, Stormers replacement hooker Venter scored what was the decisive try.
The Stormers are deserved winners of the inaugural United Rugby Championship and along with the Bulls, ensured that the tournament has arrived. Irish teams have dominated this competition, played in various guises, for years. The Stormers and Bulls have laid down a marker that the South Africans are here to stay.

It was the Stormers’ third win over the Bulls in the competition and none have been by more than a single score. The men from Pretoria might have fallen short on the night but they are also a team that will improve and develop. With the Boks as the top Test team in the world and the South African provincial game in such good shape, exciting years lie ahead for the sport.

But this match, on this night, belonged to a Stormers team that just won’t quit. The future of the WPRFU, at boardroom level at least, is not settled or stable. But on the field the Stormers are potentially at the start of a long, and successful journey.
Scorers:
Stormers – Tries: Evan Roos, Andre-Hugo Venter. Conversion: Manie Libbok. Penalty: Libbok. Drop-Goal. Libbok.
Bulls – Try: Harold Vorster. Conversion: Chris Smith. Penalties: Smith (2). DM