The ancient wilderness that looks after animals and people 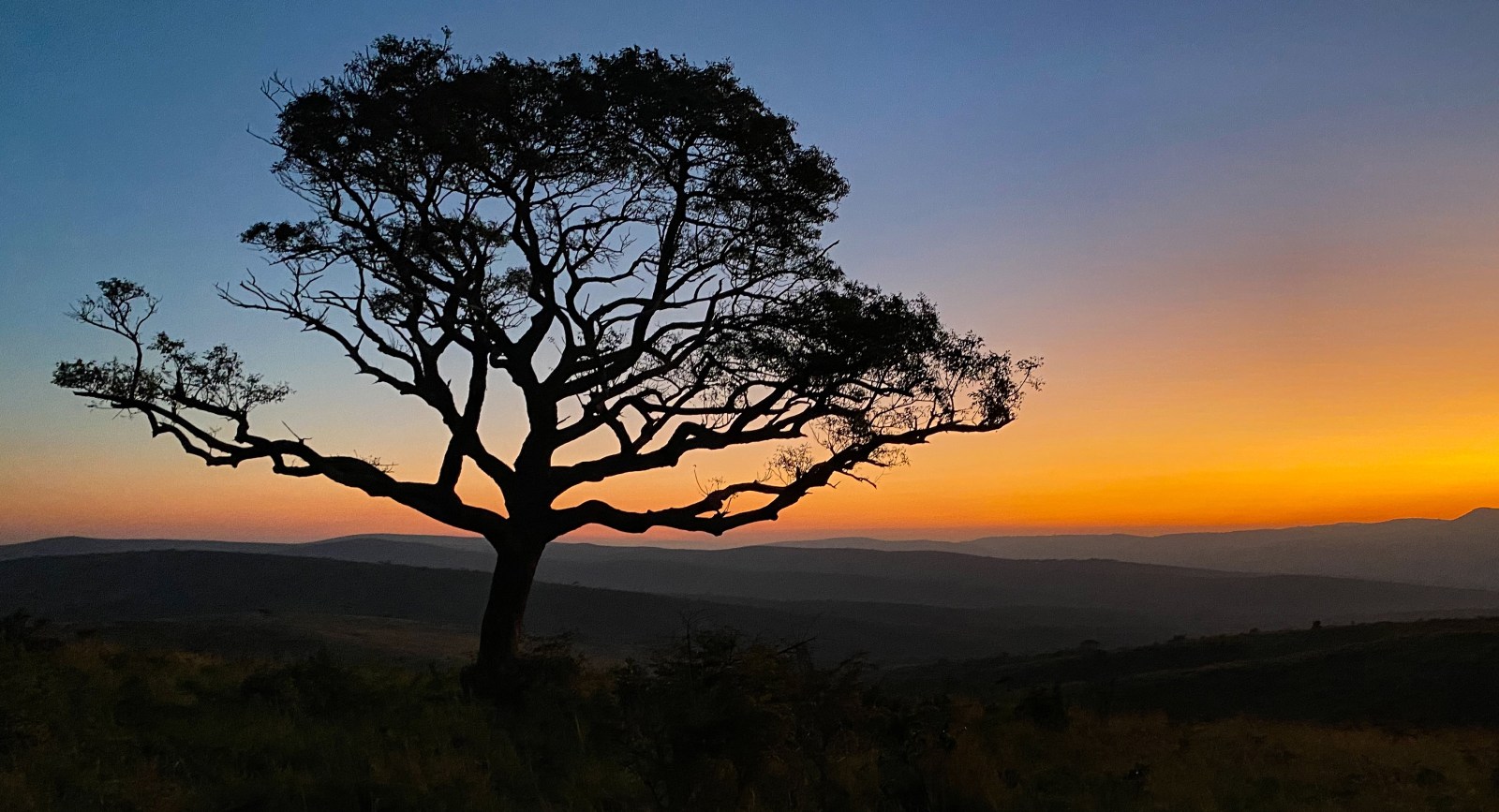 A marula tree waves on goodnight to the sun on top of Mnqabatheki hill. (Photo: Angus Begg)

KwaZulu-Natal’s Hluhluwe-iMfolozi Park might have changed a bit in the past 30 years, but the fabled hunting grounds of Shaka Zulu and the colonials still bring visual treasures to the eyes of tourists.

Almost on cue, after driving through one of the Hluhluwe-iMfolozi Park (HiP) gates, I see a rhino. Not the wary and instinctively aggressive black of the species, which would usually have had me really excited, but its placid white cousin, grazing not far from the road, against the light. It nevertheless raises a smile.

I haven’t been to the park for about 30 years; the last time as a primary schooler on a family holiday. Our holidays were almost always in Natal, camping in the Drakensberg and the province’s northern parks and nature reserves. As a 12-year-old in Joburg I would read Game Ranger on Horseback by legendary Zululand conservationist Nick Steele, and, as I rode with my mom and sister on weekends near a koppie called Lonehill, I imagined myself as Nick. Riding with rhinos.

This time, my few days in the park do not involve horses, but plenty of elephants, a few rhinos, magnificent landscapes, a village homestay and the only private lodge in the Hluhluwe section of the HiP.

Rhino Ridge Safari Lodge is what piqued my interest. Private lodge concessions in the two million-hectare Kruger National Park are numerous and standard — a source of revenue — but at 100,000 hectares, Ezemvelo KZN Wildlife (EKZNW)has limited the number of such concessions to three, the other two being in the iMfolozi section of the HiP.

“Go past Hilltop Camp, take road number seven, and that will take you to Rhino Ridge,” says the gate security officer at Memorial Gate. He is not an EKZNW officer, but from a private security company. I have warm childhood memories of Natal,  I recall the Natal Parks Board (NPB) staff, black and white, in their khaki green jerseys and epaulettes, at the gates and offices. But change is constant and, when it comes with a smile, all is good for the traveller.

“It will take you about an hour,” says the officer. I wondered if we would make the afternoon game drive at the lodge, but after consultation with the proverbial better half, it was agreed this was a game drive anyway.

Driving with the elephants

The roads are in good condition, despite recent torrential rains, and it is a quiet drive, populated by little more than the odd busy warthog. After taking road number seven and meeting guide Simo Buthelezi at the lodge, it turns out it is maybe better we didn’t meet any elephants along the road, as the herds over the next two days display behaviours some would call interesting and others downright frightening.

“Memorable moments Angus,” writes Simo later in response to my Facebook post, “I won’t forget elephants who tested us by not allowing our plans for the drive.”

As the guests on our vehicle — a young, recently qualified doctor from Pietermaritzburg and her mom, and an elderly solo traveller from the midlands of England — are mildly keen birders, Simo chooses a route down towards the Nyalaze River. Turning into the relevant loop road, we come across a herd of elephants, with tiny youngsters amongst them, spread along the road. A large bull in musth — overdosing on testosterone, randy and aggressive — is walking ahead. Simo tells how he was once caught in the middle of a breeding herd.

“They weren’t aggressive, but it was getting dark, like it will be soon, and then they relax into feeding. If we suddenly turn on the engine again, because of them being protective of the youngsters, we could get the wrong reaction. So it’s possible to be stuck among them for two or three hours, like I was.” Simo stops a private vehicle heading back towards the gate, and warns the woman of the danger.

“Haibo,” she says, eyes large, “but where must I go?” I think back to the adrenaline produced in a tug of war over my tripod with a large bull at a camp in Tanzania’s Tsavo National Park, and appreciate Simo’s insight, wishing the driver a silent God-speed as she drives towards the herd.

The hill of hills

As an alternative, we head for a sundowner spot on top of Mnqabatheki Hill, which offers one of the finest sunset views in South Africa. “Even during the day after a rainstorm, views are awesome from there,” says a guiding colleague, responding to a Facebook post.

Mnqabatheki looks over waves of rolling hills, fabled hunting grounds of, first, Shaka Zulu and then early colonial hunters. Framed by signature marula trees, the view is crying out to be shot against a sunset.

The valley bushveld and montane thickets of the Hluhluwe section of the park are thicker than usual at this time of year, making the spotting of game a touch more challenging. Yet the park’s well-maintained road network delivers wild treasures to our eyes. On our two days there, depending on which route was taken, we see Cape glossy starlings in their iridescent beauty, magnificent Nyala bulls performing a dance-like display pre-combat, and white rhino, warthog, impala, baboons, reedbuck, giraffe and lion. Actually, it is our game-drive companions who see the lions, three large-maned males, on a windy morning, when we stay in.

Such are the ways of the bush. Like humans, animals tend to take shelter on windy days, and, as we have work to do, missing the drive is a calculated gamble.

What we do see together, maybe 10 metres from the vehicle on the road, is a pair of giraffe in bright afternoon light, the male with his short horns rubbed bare from fighting, framed against the dark green hills of Hluhluwe. This park has a rare perspective, with its topography, sometimes similar to the Pilanesberg, showing off “common” animals in a new and different physical context.

Later, from the deck of the lodge, high above the valley floor, a small herd of giraffe stands out like tall yellow sticks in the same section of the valley bushveld, while a couple of hundred metres north of them a herd of maybe 20 elephant moves swiftly through the thickets.

With the land largely undisturbed since its proclamation as a reserve in 1895, it’s easy to believe that this could feasibly be the oldest proclaimed wilderness in Africa, as has been claimed. Another constant in the area since then, dating back at least to the Stone Age, has been the presence of people, like our guide Simo and barefoot wilderness trails guide Nunu Jobe.

Nunu takes guests on walking trails in the reserve and into the Mpembeni community. He takes me to meet Zemani Nkosi, who with her mother runs the village homestay on the edge of the community, adjacent to the park service gate, a 10-minute walk from the lodge.

The homestay is offered by Rhino Ridge as an experience, as a way of supporting Zemani’s business. She is now registered on Airbnb and, while explaining village life, she tells me about a master weaver in the community, Angeline Masuku. She calls Angeline and Nunu drives me over to meet her.

Her rustic studio is filled with elaborate baskets. Angeline is packing a shipment for delivery to the Decorex Expo in Cape Town and she shows me her brochure.

This is a reminder of the power of tourism and how it can change lives in South Africa. If the lodge hadn’t been built here, on the edge of Hluhluwe-iMfolozi Park, as a joint venture with the community, attracting visitors and related businesses, it’s quite likely Angeline and her weaving would not have been discovered.

The park has changed much in 30 years.

Rhino poaching is brutal, but I believe it will be — has to be — brought under control. Yet the local people, like Zemani, Simo, Nunu and Angeline, have hope and the chance to make a decent living, thanks to the park’s existence. DM168

The ancient wilderness that looks after animals and people