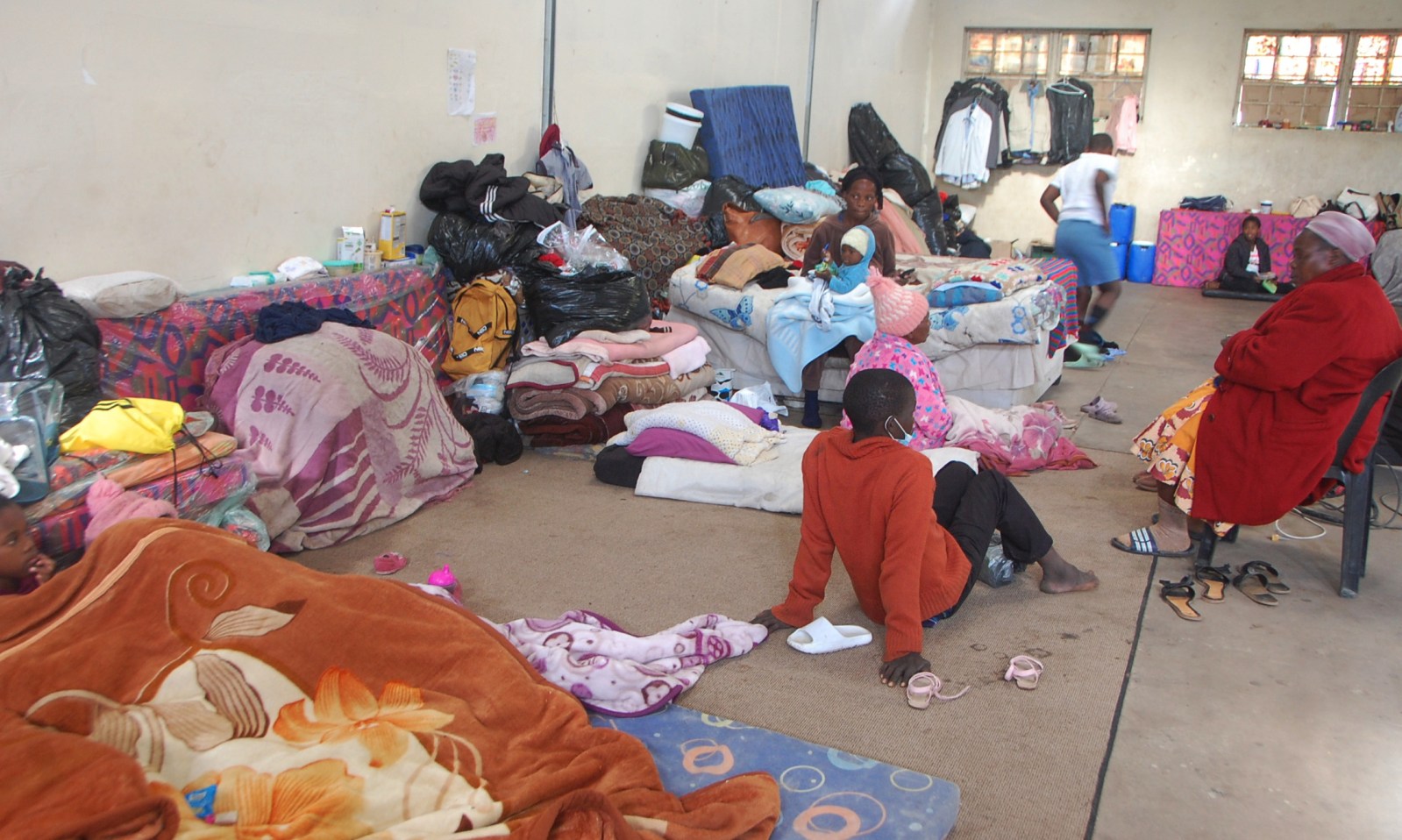 People stay in a cold with no windows community hall in Tshelimnyama west of Durban after being displaced by April floods, 15 June 2022, Photo: Phumlani Thabethe

Elderly people and small children are among those still living in community halls in KwaZulu-Natal after the floods in April. One municipal official blamed ‘construction mafias’ for delaying plans to build temporary residential units for the homeless.

Elinah Shandu, 68, is one of dozens of elderly women who are still living in community halls after devastating floods swept through parts of KwaZulu-Natal, especially around Durban, in April.

Shandu suffers from arthritis and high blood pressure. She has been living in the Tshelimnyama Community Hall, about 23km west of Durban, since the house on the hillside she shared with nine children and grandchildren collapsed, leaving them with only the clothes on their backs.

More than 60 people, including children as young as three, are living here. They have no privacy and, with the hall’s broken windows and doors, it is bitterly cold inside.

The April floods destroyed roads, bridges and homes and displaced tens of thousands of people. At least 460 died and another 80 are still missing.

Some who lost their homes found shelter with friends and neighbours, but thousands more have been forced to live in halls, churches and community centres.

The government had promised to provide temporary housing for the flood victims, but very few of these units have been built so far.

The flood victims living in these shelters are surviving through donations of food, clothing and blankets.

Shandu’s children and grandchildren are temporarily staying with neighbours and relatives. She has to share her pension among unemployed family members so that they, too, may eat.

“Life is tough here,” she says.

“I often think about whether or not my family members have eaten. The cold that comes through the broken windows here is unbearable, especially at night.

“I wish the government could build something for us in safer places so that we can come out of this hall.”

Shandu was among dozens of women living in temporary shelters after the floods who travelled to the Durban City Hall to stage a protest two weeks ago.

“We wanted to alert the authorities to our plight. At night the metro police and the SAPS came with dogs and threatened to hit us. They forced us into minibuses and took us back to the halls. How can you treat elderly people like that?

“The authorities don’t care for us.”

Nompilo Sithole, 29, who also sought temporary shelter at the community hall after the floods and was part of the Durban City Hall picket, said that during their sit-in, they heard from eThekwini municipal officials that the names of homeless flood victims did not appear on a list for vouchers and other benefits promised to displaced people.

Similar sentiments were expressed by displaced people living in the KwaDinabakubo Hall in Molweni, about 45km northwest of Durban, where 76 people whose homes were washed away in the floods have taken refuge.

According to the local councillor, 25 people from Molweni died in the floods. Six are still missing.

Displaced people at the Molweni hall, especially women, said life was tough. However, most were reluctant to speak on the record for fear of retribution.

“If we are not on the municipality’s list, it means that some crooked people took our names and changed other details so that they would benefit from our plight.

“This just shows you how low some people are prepared to go just to steal. How can you take from people who have lost their loved ones, who lost houses, who lost everything?” said one woman in her 30s.

Others said some volunteers steal donated food to sell or take to their own homes.

“They claim to be helping us, but they are stealing from us,” said one.

“We are scared to speak because we are vulnerable and could be attacked.”

Ward councillor Nontshikelelo Msomi said that following the complaints, she had decided to stop volunteers from working in the hall. She said as far as she was concerned, all the displaced people in the hall are on the list that has been sent to the eThekwini municipality and the KZN Department of Human Settlements.

“We hope that this problem will stop, now that the volunteers are no longer there. But we have a problem with some people who had rented rooms before the floods. When those rooms were damaged, they then went to the hall and registered. But they don’t have house numbers so it would be difficult to deal with their matters.

“They don’t have the land where the temporary residential units (TRUs) can be built for them, because priority is given to people of the ward who have house numbers,” she said, adding that 60 TRUs will be built in the coming weeks.

“We want to get people out of the hall and into their homes as soon as possible,” Msomi said. It has been 65 days since the floods.

Jomo Sibiya, KZN MEC for Human Settlements, said this week his department’s plans to build thousands of TRUs for displaced people have “hit a few snags”. He said one of these is that local construction forums, also known as “construction mafias”, have stopped or vowed to stop work unless they are given some of the contracts to build these units.

“(So far) more than 200 temporary residential units have been completed… We have identified over 78 hectares of land on which more than 3,385 people affected by the floods will be accommodated,” Sibiya said.

It costs the government R68,000 to build a temporary residential unit.

Mmamaloko Kubayi, the national Minister of Human Settlements, announced on 10 June that eight contractors had been appointed to build TRUs for flood victims in eThekwini, Ugu, Ilembe and Umzinyathi municipalities.

“A social facilitator has been attached to each mass care centre to identify affected families who have their own sites available to construct houses. In addition, the department is issuing orders for building material vouchers for residents who are rebuilding their own homes,” Kubayi said.

Ndabe Sibiya, spokesperson for the KZN Department of Human Settlements, said one of the stumbling blocks hindering the government from speedily building houses for the flood victims is objections from ratepayers’ associations who are taking legal action to stop TRUs from being built on government land in their neighbourhoods. The Reservoir Hills suburb near Durban is an example of this happening.

Mandlenkosi Zondi, 66, of the eMadimeni section of Molweni, is one of the few people for whom a TRU has been built. He shares his house with his wife and nine children and grandchildren.

On the day of the floods, Zondi and his wife were living in a dilapidated, two-roomed mud house along with other members of the family.

“I heard the house crack and cave in. My wife and I were trapped inside. I had to scream to my children to pull us out,” he said.

He now lives in a new TRU, big enough to accommodate him and his wife, but too small for the rest of his family.

“It is better than nothing, but we would be happier as a family if we could get a bigger house. I cannot afford to build a safe and secure house for my family… I am only a pensioner,” he said. DM