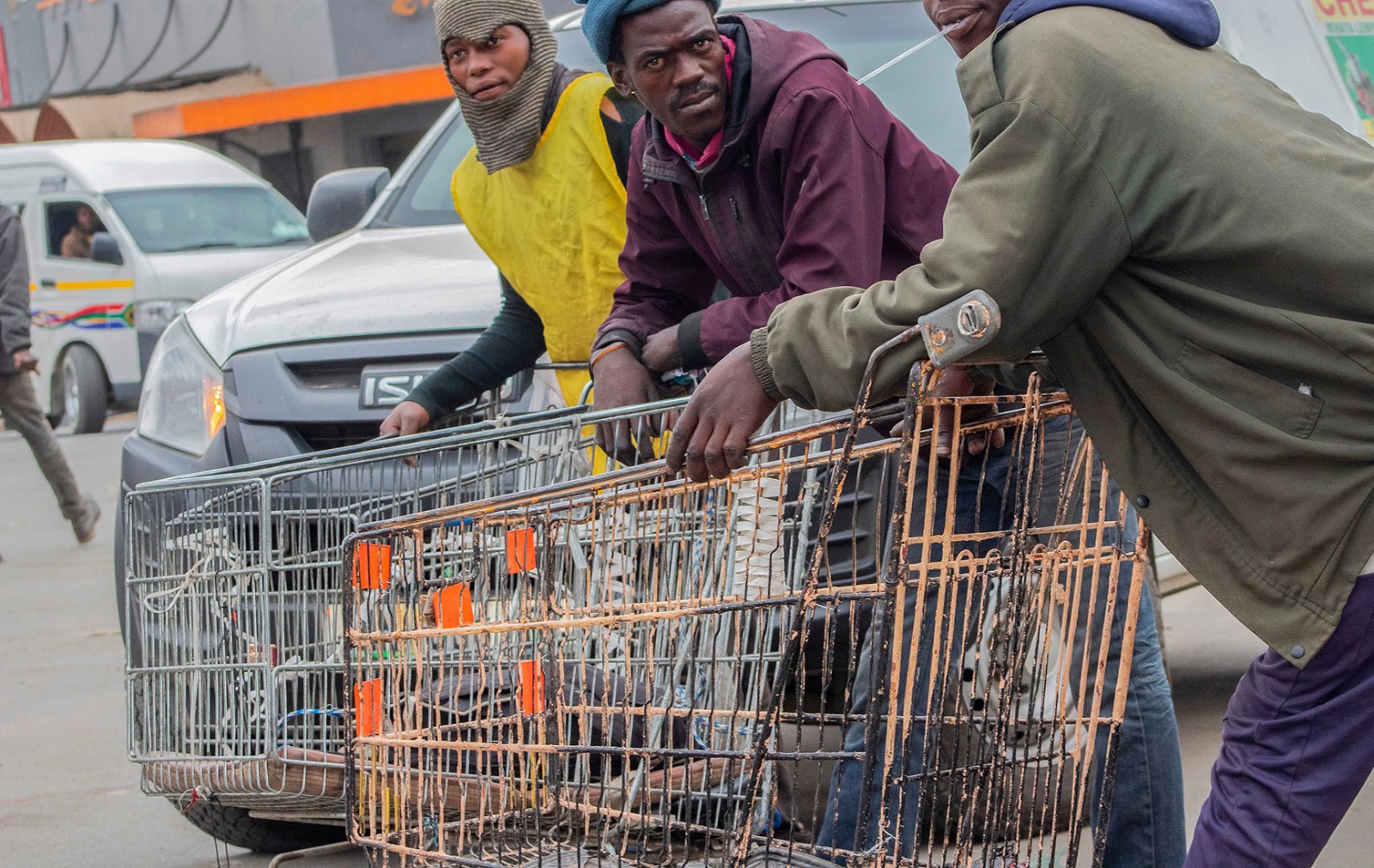 In Mthatha, where work is incredibly scarce, young graduates are pushing trolleys at shopping centres for a living as they struggle to find jobs and access the R350 Social Relief of Distress grant.

One of them, Akhona Mahlangeni, who has been unable to find a job for the past eight years, said: “The money that I get here is used to buy food for my family and for myself. All of us are unemployed. Some of us, who work with the trolleys, are well educated but we are not getting jobs.”

Aviwe Marhawula, who works with him, said he only received the R350 grant for three months.

“Things are worse now,” he said. “When we got the R350 grant we had to pay the Post Office officials R50 otherwise they would kick us out of the queue. I stopped applying for the grant. It was too painful. It is better to work with the trolleys than to have to pay them R50 all the time.

“We are not all criminals, but because of being unemployed we decided to push trolleys for people. Our mothers are not working and we need to assist them.”

Mbasa Nyebe (22), who obtained a diploma in public management in 2021 from the King Sabata Dalindyebo TVET College, said being unemployed is incredibly difficult. Some of his fellow graduates had committed suicide, while others had turned to crime because they could see no other way out.

“Since the beginning of this year I have been knocking on the doors of different departments, looking for work. There is no response for now, it’s hard. I am not coping. Imagine going to school for years, paying school fees and then when you obtain your diploma you cannot get a job. This is depressing and the government needs to listen to us as young people to create more job opportunities for youth and there are only a few posts available every year,” he said.

“Almost all of us who did the public management course are unemployed because the government creates only two or three posts a year.”

Another unemployed graduate, Zipho Xuba, obtained her diploma in 2020. She said she wanted President Cyril Ramaphosa to place emphasis on unemployment during his speech this Thursday when he is expected to visit Mthatha.

Eso Bofu (23), who is from Mandela Park in Mthatha and who had been receiving the R350 grant, said young people in rural areas are being neglected.

“There are no job opportunities in Mthatha and in addition they decided to stop giving us the R350. It has been three months since I last received a grant.”

The grant had helping her pay rent for her brother who is in Grade 12 at Gobizizwe Senior Secondary School in Ncise, outside Mthatha.

Over the past 28 years the government had been promising to change the lives of the young people in the country, but in reality only a few had managed to access government services.

“Youth unemployment has been and still is a problem in Mthtata and in the Eastern Cape province, and this has caused a huge number of our young people to opt for crime, drug abuse and violence,” he said.

“I personally think that access to quality education is the only answer for dealing with the high youth unemployment. Yes, in the past years young people have been granted access to education, but after completing their studies they sit at home because they have no place to go and get employed and that is where the government is failing the youth of this country.”

Eastern Cape premier Oscar Mabuyane said this week in a written answer to questions from the DA in the provincial legislature that the expanded unemployment rate in the Eastern Cape is 80.7% for those aged between 15 and 24. For 25- to 34-year-olds it was 62.7%.

However, the expanded rate of unemployment (including those who no longer look for work) was 80.7% for those up to the age of 25 and 62.7% for those younger than 34.

The latest available statistics are for the fourth quarter of 2021.

Mabuyane said that owing to concerns about the quality of data, the province’s unemployment rates could be refined for specific metros and rural areas.

He said 25,154 jobs had been created in the 2020/21 financial year. The bulk (19,176) were in the Coega Special Economic Zone in Nelson Mandela Bay, 4,492 were in the industrial zone in East London, while 1,486 had been created by the Eastern Cape Development Corporation. DM/MC