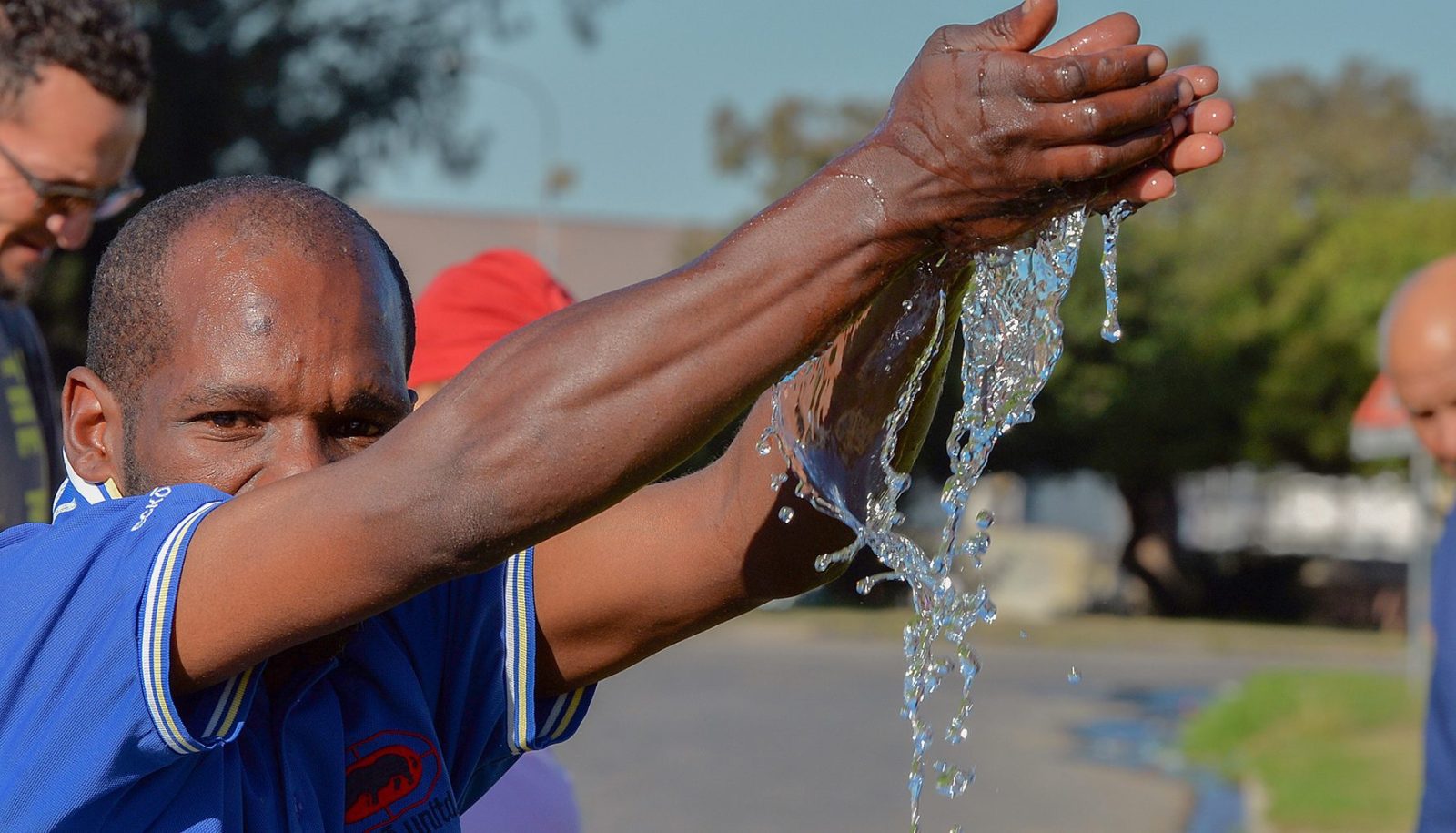 Gelvandale, Eastern Cape, resident Alvino Stuurman at a site in Martin Street where clean water has been running into the drains for years. (Picture Deon Ferreira)

‘The city is in deep trouble.’ These were the words on Wednesday of Gift of the Givers’ Dr Imtiaz Sooliman on the water crisis in Nelson Mandela Bay. His organisation has been joined by the Business Chamber – with members offering technical assistance – and a call has gone out to anyone who can help save the city from an unprecedented humanitarian crisis.

The Nelson Mandela Bay Business Chamber, Gift of the Givers Foundation and the Nelson Mandela Bay Municipality on Thursday partnered on a series of urgent interventions to avert a humanitarian crisis in the metro, calling for anybody who can help fix leaks and establish water augmentation projects.

“The offer will see Gift of the Givers provide several water tankers, trucks and all necessary humanitarian support should the metro need it,” a statement by the metro read.

“The city is in very deep trouble,” said Dr Imtiaz Sooliman from Gift of the Givers, adding that they will help introduce water augmentation projects very rapidly.

“We can take the pressure off very quickly,” he said.

He said they will drill new boreholes and also open up old ones and connect these directly to the water reticulation system. He said sites where there is water “coming from the ground” have been identified around the city and these will be made available for public use.

“I am sure we can make a difference in the next few days,” he said. “We have a good plan.”

The metro is in the seventh year of a devastating drought. While some rain fell in the region on Wednesday, 50mm is needed in 24 hours to re-establish water security.

The metro’s supply dams have almost no water left. Once they are dry, this would leave the metro relying almost entirely on water from the Gariep Dam brought to the city by the Nooitgedacht Scheme.

Spokesperson for the Water Crisis Joint Operations Committee, Luvuyo Bangazi, said that while more than 25% of water is lost to leaks in the metro, consumption and leaks are different issues. He said there are currently 43 teams out working to fix leaks.

The metro currently has 3,163 reported leaks that have not been fixed, with 359 fixed so far this week.

“The municipality has acknowledged that the turnaround time in fixing leaks is not ideal. It is being improved with an aspiration of getting to [within] 48 hours,” Bangazi said.

The city lost thousands of litres of clean water after a pipe was broken open by vandals who stole a valve. Bangazi said this was reported to the JOC.

“The Nelson Mandela Bay Business Chamber, in partnership with the municipality, will coordinate the efforts of local businesses that have volunteered to help repair the metro’s severe backlog of water leaks through an Adopt A Leak initiative which is in the process of finalisation,” the Chamber said in a statement on Thursday.

Leaks account for 29% of the metro’s daily water consumption. New leaks are reported almost as fast as existing leaks are repaired, and accelerating the pace of repairs is critical to curbing water losses and conserving the metro’s water supply.

Adopt A Leak will work along the lines of the Chamber’s Adopt A School initiative, which has supported 46 schools and clinics by providing plumbing maintenance and repairing leaks, as well as providing alternative water solutions such as rainwater tanks and boreholes.

Business Chamber chief executive Denise van Huyssteen said the Chamber’s key water crisis interventions – Adopt A School, Adopt A Leak and various humanitarian initiatives – provided a platform for business to help mitigate the risks associated with the water crisis. They would be implemented in partnership with Gift of the Givers.

“Taps running dry risks an unprecedented health and humanitarian crisis in the metro, particularly in the most disadvantaged areas. This is a time when we all need to stand together and work for the greater good of Nelson Mandela Bay.

“The response of businesses willing to volunteer their services, time and resources to avert a crisis by repairing leaks, installing water tanks and boreholes, treating water and other assistance, has been really encouraging.

“Adopt A Leak will enable business to implement voluntary assistance in a coordinated and integrated way in order to rein in the extent of the water leaks.

“We have agreed with Gift of the Givers to openly share our plans and resources and coordinate our efforts, making the business and civil society response to the water crisis more efficient and effective,” Van Huyssteen said.

Sooliman, who arrived in the metro with his team earlier this week, said they had started drilling boreholes within hours of their arrival, focusing on disadvantaged areas in the “red zone”, at the most imminent risk of running out of water.

He said that Gift of the Givers would also be tracing existing boreholes that are still viable and can be restored to use, providing immediate access to water.

They will also be installing water tanks at the sites to be serviced by municipal water trucks, so that residents can collect water at any time without queuing or waiting for a water truck to arrive.

Water tanks will be placed in secure locations at schools, clinics, hospitals and police stations to serve surrounding communities.

“Partnering with the Business Chamber is the best way to move forward, as we already work with many of the Chamber members, and we can ensure coordination of resources and efforts,” said Sooliman.

“We have identified immediate projects that will most benefit the metro and we stand ready to do whatever is needed with the Chamber – whether it is to act as implementing agent, interface with government or deploy funds into projects where they are needed,” Sooliman said.

“Funding for borehole pumps, JoJo tanks, drilling of new boreholes, and supporting the repair of electrical and mechanical equipment will speed up the water delivery process,” Sooliman added.

Van Huyssteen said the Chamber’s water crisis fund would provide a mechanism for businesses to contribute towards the various actions which will be undertaken to rein in water losses and mitigate risks associated with the water crisis, with priority focus on Adopt A Leak, Adopt A School and other humanitarian initiatives.

Sooliman said businesses contributing to the fund would receive a tax certificate from Gift of the Givers to enable donations tax deductions.

“The leak situation is still dire and this is where we will be focusing, along with boreholes, pump water treatment plants, rainwater harvesting and repairing or upgrading pumps at dams.

“At the same time, residents and businesses still need to cut water consumption, implement solutions such as rainwater tanks, and also search for leaks on their own premises.

“It is vital that all stakeholders pull together to reduce the severity of the water crisis.”

Luvuyo Bangazi said “the JOC welcomes the initiatives and will do whatever is necessary to make sure this initiative succeeds”.

Meanwhile, a law enforcement squad from the metro closed down four car washes and fined owners R1,500 each for using hosepipes on their premises. Hosepipes and vacuum cleaners were confiscated by the officers.

A business owner who was illegally selling borehole water was also fined. MC/DM

Businesses willing to volunteer expertise and resources, or contribute to the Water Crisis Fund, can contact the Business Chamber on 041 373 1122 or email [email protected]