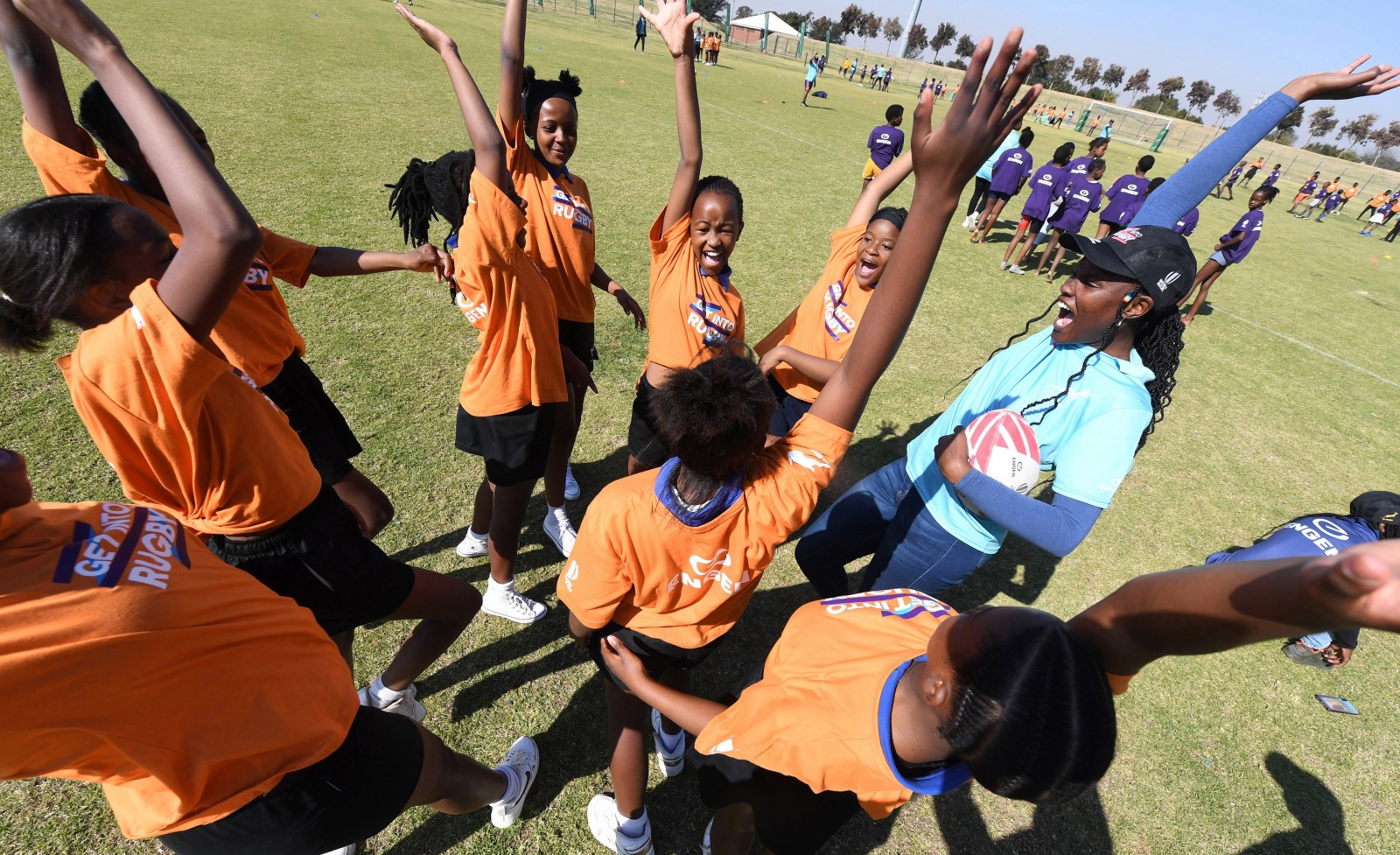 Young coaches work with school children during the Get Into Rugby Festival at Tsakane Stadium in Brakpan on 8 June 2022. Sport plays a number of roles in society. It is a source of entertainment and a unifier of countries. (Photo: Sydney Seshibedi / Gallo Images)

Sport has the ability to take people from societal invisibility and exclusion, to positions of influence.

Sport plays a number of roles in society. It is a source of entertainment and a unifier of countries – worldwide.

It is a productive industry with the ability to contribute to local economies. Sport and sustainable sport tourism can promote livelihoods, including in places that host sports events.

But for many in a country as unequal as South Africa, it can also be the difference between pulling yourself and those around you out of the disparities of poverty and hopelessness that the majority in this country find themselves in.

Think Springbok stars Siya Kolisi and Makazole Mapimpi. Both from rural Eastern Cape. Both moulded by conditions of unemployment, hunger and degradation that they happened to be born into.

However, through their sporting achievements over the years – having taken different paths which converged when they both played an integral part in the Springboks’ 2019 Rugby World Cup triumph – they are now in a position to take care of their families.

They are also in a position to drop the ladder for those who wish to emulate their success but lack the resources.

I want a better life

Another South African currently in pursuit of the type of success achieved by the Springbok duo is Bafana Bafana forward Bongokuhle Hlongwane.

The 21-year-old former Maritzburg United player moved to the US in January 2022 after signing a three-year deal with Major Soccer League side Minnesota United.

Though prone to moments of homesickness since his arrival, the South African – who grew up in rural Nxamalala in Pietermaritzburg, KwaZulu-Natal – sees the bigger picture of the cross-continental move.

“Sometimes, when I see people’s families coming to support them during games, I also crave that for myself. To have my family come and support me too. But it’s impossible. So, I have to take it,” Hlongwane said during the most recent Bafana Bafana camp as they bid to qualify for the Africa Cup of Nations.

“It’s not hard. If you know what you want in life, you have to do everything you can to face every challenge that comes your way. It’s about what you want and what you need, and the sacrifices you have to make for that.

A gap to bridge

Of course, not all aspiring sports stars even dream of reaching the pinnacle that the likes of Kolisi and Mapimpi have, nor the heights that Hlongwane hopes to scale.

Mapimpi himself, still soaking in South Africa’s World Cup triumph three years ago, was in disbelief at how far he had come.

“I remember a few years back, I was playing Sunday-league club rugby,” he recalled of his time playing for the Border Bulldogs.

“There’s no professional league in the rural areas and one of my friends told me, ‘you can make it man’. I told the guy, ‘No, bro, no one is watching me. We are too far from the system’,’’ said the winger.

Mapimpi’s utterances, owing to myriad factors – not least South Africa’s dark past – remain the reality of many girls and boys with genuine and raw sporting talent.

Because of the isolated locations in which they find themselves, it is difficult for many youngsters from the townships and rural areas to regularly participate in regional leagues for the sporting codes they have at their schools. If at all.

Due to their locations, some of these schools even lack basic learning equipment such as textbooks. Some pupils can barely afford to put together a school uniform. With that in mind, a football field or netball court is a luxury at these institutions.

Despite 28 years of democracy, government corruption and cadre greed ensure that the effects of apartheid’s spatial planning remain relevant.

Regardless, those who have made it out try to pour back what they can to ensure that those who come after them have better odds of making it than they did. As Banyana Banyana star defender Bambanani Mbane told Daily Maverick:

“Anything I do is not for Bambanani, it is for those who will come after me. I come from a rural area and others from a similar background must know that they can reach the level I have reached as well.” DM

Yanga Sibembe is a sports reporter at Daily Maverick. He joined the publication in 2019 as part of the Young Maverick programme.