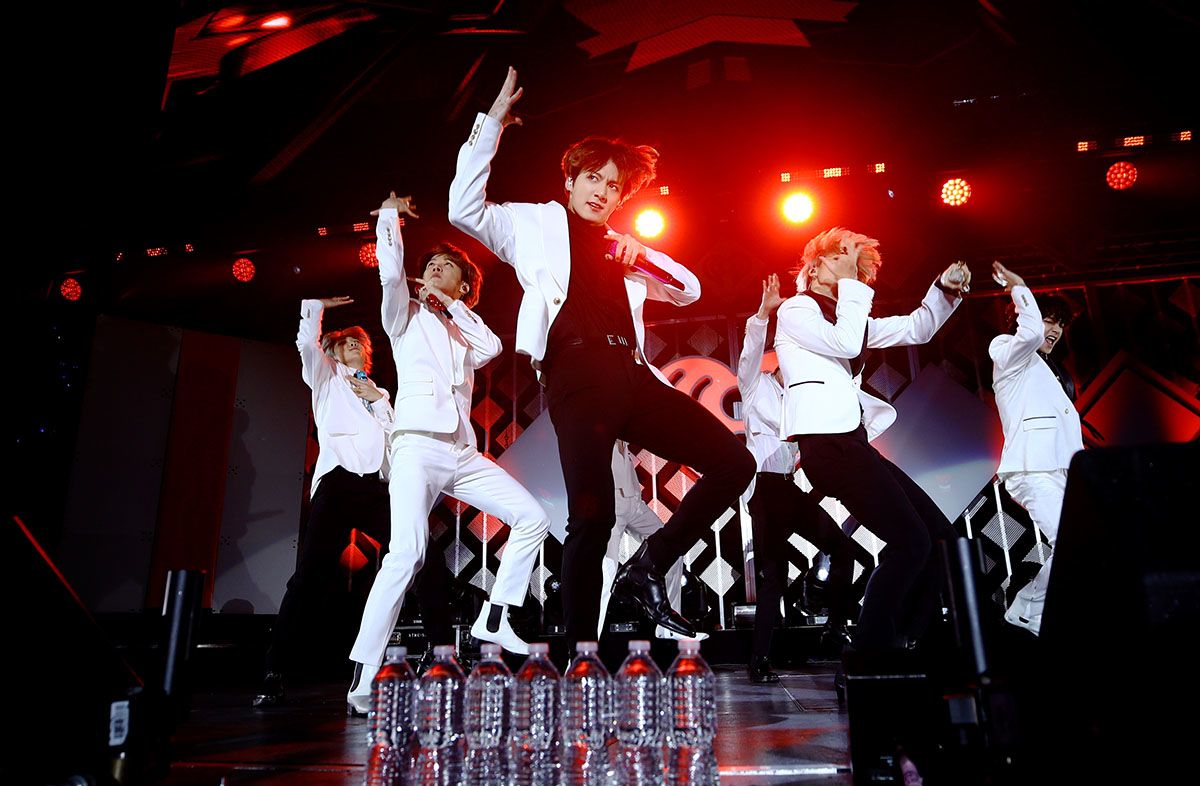 (L-R) RM, J-Hope, Jungkook and Jimin of BTS perform onstage during 102.7 KIIS FM's Jingle Ball 2019 Presented by Capital One at the Forum on December 6, 2019 in Los Angeles, California. (Photo by Rich Fury/Getty Images for iHeartMedia)

SEOUL, June 15 (Reuters) - K-pop pioneers BTS faced tears and sympathy from fans but anger from shareholders in their management company on Wednesday, a day after the band, pleading exhaustion, announced a break from group musical activities to pursue solo projects.

Many in South Korea reacted with shock and dismay at Tuesday’s news that, with some of its seven members approaching military service age, also triggered speculation about the future of a band whose upbeat hits and messages of youth empowerment have turned them into global stars.

“I could relate to them as they shed tears and honestly told us how they felt,” fan Nini Lee told Reuters from a café in Seoul where she had gathered with other fans.

“Their voice gave me huge strength when I had tough times, and I’m no longer afraid of such headwinds …Now I want to give my voice of courage to them.”.

Kim Young-sun, who runs the cafe, said she felt sorry that she as a fan had only wanted more from BTS at a time when they were struggling, wishing them a well-deserved break to recharge their batteries.

BTS Leader and rapper RM, in a tearful video released on Tuesday on the ninth anniversary of a group that last year became the first Asian band to win artist of the year at the American Music Awards, said he had “felt guilty and afraid” to ask for the rest that he desperately needed.

Singer Jimin said they were struggling to find their identity in what he called an “exhausting process,” while RM also lamented that the K-pop industry could not provide young artists with “time to mature”.

On social media, some other fans blamed BTS’ management group HYBE for relentlessly pushing for new albums and other moneymaking opportunities.

The company did not immediately respond to a request for comment.

“The K-pop and idol industry had long been running on a profit-making system where the stars cannot take a rest even when they burned themselves out,” said Jung Duk-hyun, a South Korean cultural critic.

“They’ve planted ‘dynamite’ in the hearts of shareholders,” one wrote on a Samsung Securities stock trading platform, referring to one of the group’s hit songs.

All able-bodied South Korean men are subject to about two years of military service, and the oldest member of BTS, Jin, is required to begin his duty next year.

A bill pushing for providing military exemptions to globally renowned artists is pending in parliament, amid prolonged debate over whether BTS deserves similar benefits that sport athletes enjoy.

Lee Ki-hoon, an analyst at Hana Financial Investment Co. Ltd., wrote in a report that BTS’ lack of public activity including the impact of military service could result in a 750 billion won revenue loss in 2023.

By Hyonhee Shin and Yeni Seo