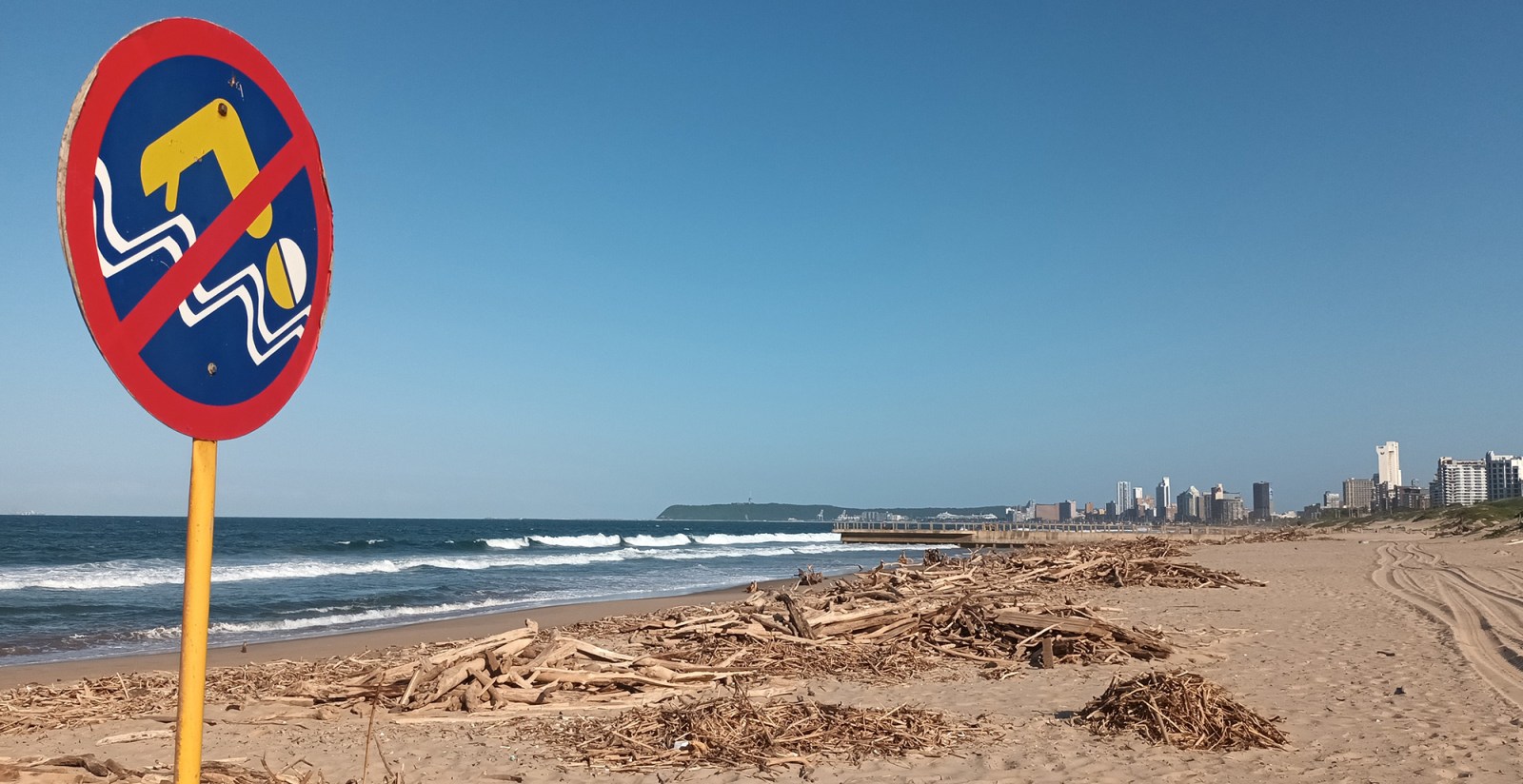 More than two months after the April floods, all Durban beaches remain closed – with no certainty on how soon they might reopen. (Photo: Tony Carnie)

With sewage pollution still above safe swimming levels at several places along the Durban coastline, there is still no certainty on when the city’s main beaches will reopen.

More than two months after all Durban’s beaches were closed because of the devastating April floods, several sewage treatment works are still kaput – and it could take several months to repair them.

Large sections of sewerage reticulation pipelines are also broken, adding to the torrent of untreated sewage flowing into the ocean from a city with close to four million people. A further concern is the volume of untreated chemical and kitchen effluent flows from numerous industries and small businesses across the city.

According to a provincial government report presented to the KZN Parliament last week, the eThekwini (Durban) Municipality has at least 27 wastewater treatment works, 289 sewer pump stations and more than 9,000km of sewage/wastewater pipelines.

The report says nearly one-third of these treatment works suffered “high” flood damage and an unspecified number were considered to be “totally non-functioning as a result of the floods”.

It further suggests that more than R4-billion is needed for “repairs and upgrades” to eThekwini’s wastewater treatment infrastructure, while a further R1.7-billion was needed to repair wastewater networks in the iLembe (North Coast) and Ugu (South Coast) districts.

We sent written questions asking the eThekwini Municipality last week to confirm these repair estimates presented to the KZN Parliament.

In response, the city disputed the R4-billion repair bill, stating: “This is incorrect. The estimated cost from the assessment done on treatment works is about R320-million.”

City spokesperson Msawakhe Mayisela said the lower figure excluded the costs of other infrastructure such as “sewer reticulation, pump stations and containerised ablution blocks that were also severely damaged”.

Was it possible to say when some or all beaches would be reopened?

“That will depend on the completion of the infrastructure repairs. It is difficult to put a date to that, it depends on progress made,” he said

We also asked the city to provide the latest available readings of E. coli (sewage bacteria) in the water along the northern, central and southern beaches.

The city did not provide these requests, stating instead: “The levels are high enough for the city to close its beaches in order to ensure the health and safety of its residents and visitors.”

Were the E. coli levels still high or declining following the April flood?

Worryingly, the city responded: “There is no significant difference as most of the repairs have not yet been completed.”

And yet, despite the city’s reluctance to provide E. coli readings, which are ordinarily updated and posted on signboards along the Durban beachfront every two weeks, independent laboratory analysis by the Adopt-A-River citizen network suggests that there had been a drop in E. coli readings at beaches closest to the harbour mouth.

These water-quality results, analysed by the Talbot & Talbot laboratory in Pietermaritzburg, indicate that E. coli levels at the Point, uShaka, South and North beaches were all slightly below 250CFU/100ml on June 2, although readings from Battery and Country Club beaches further north were still in the “critical” range.

Given the overwhelming shortage of government and emergency relief funding for so many other pressing flood-relief projects and social needs (such as wrecked houses, schools, roads and clean tap water networks), it remains unclear how soon, and how much, funding will become available to repair sewerage and wastewater infrastructure.

Sources suggest that a decision to reopen beaches will depend largely on the next water safety tests, due to be collected on June 20. Based on these results, it was possible that some of the central beaches may be reopened quite soon.

However, with several treatment works and pipelines still completely non-functional, it is also possible that many other beaches will remain closed for several weeks, if not months.

From the comments supplied, it is not possible to determine exactly which treatment works are not operational, although it is clear that the Northern Treatment Works, serving large areas to the north of the city, is completely out of action. With no sewage at all entering this facility for treatment, it appears that large volumes are flowing from broken pipes into the soil or the Umgeni River and then out to sea near Blue Lagoon.

No sewage is flowing into the Tongaat or Umdloti works and it appears that there is still significant unrepaired damage at the KwaMashu, Hillcrest, Umhlanga, Umbilo, Glenwood and Kloof treatment works.

With no clarity on when beaches will be reopened, we asked the Fedhasa hospitality industry group to comment on the possible impacts on tourism numbers and revenue over the June/July holiday season – but no responses have been received yet.

Janet Simpkins, the founder of the Adopt-A-River group, suggests there are no immediate solutions in sight.

“Right now, it seems to be a case of wait and see. The city is in dire straits financially, so it’s really anyone’s guess on how soon funding is allocated – or whether there will be a patch-up job. We have seen no communications and no plans.” DM/OBP