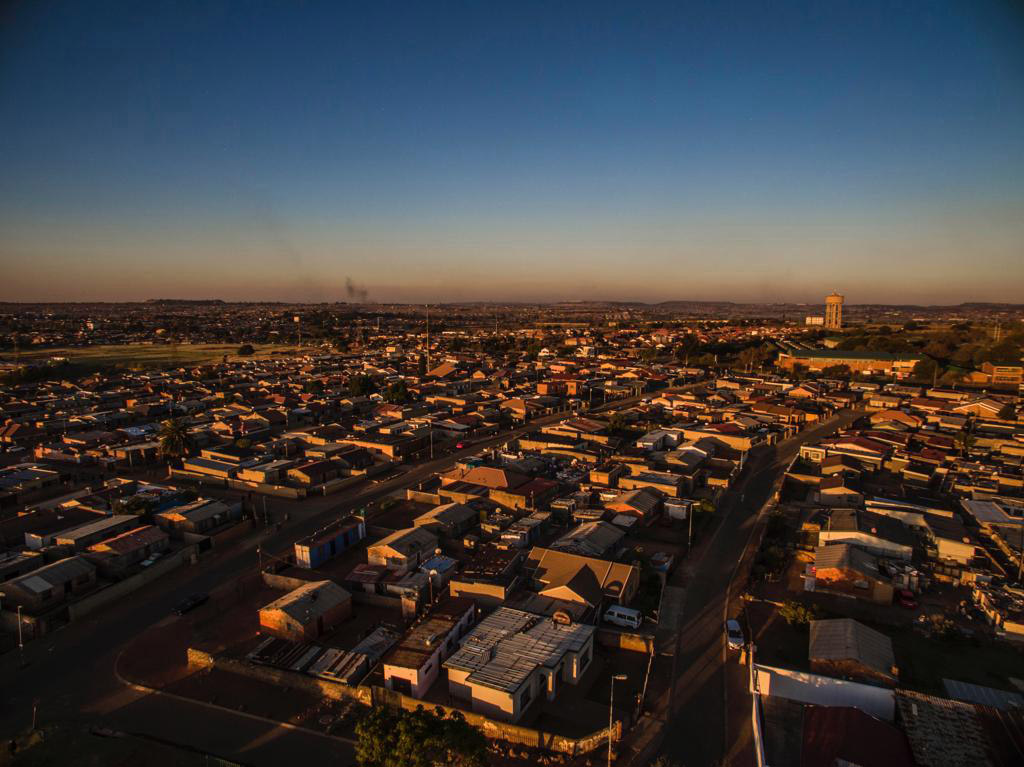 The Sandis’ Ubuntu Foundation art programme operates out of Kholwani Primary School in Jabulani, Soweto. The programme’s learners have produced pieces that capture the bleak conditions many young South Africans face, but also the capacity of youth to overcome adversity.

‘The artworks produced by young people are pure and incorruptible because they are still honest to… their dreams. They follow their hearts and imagination. Their message carries honest intentions that can help contribute towards the greatness of the universe.”

These are the words of Musa Mbele-Radebe, the founder of the Sandis’ Ubuntu Foundation. The foundation operates in Jabulani, Soweto, providing multifaceted support to the young people of the community. Since 2020, it has offered an art programme for primary and high school learners in the area who are interested in visual expression.

“We have created an initiative that enhances the creative skills of young people, exposing them to the bigger art industry with the hope of creating access to economic opportunities [and] providing them with the necessary training,” said Mbele-Radebe.

The art programme operates out of Kholwani Primary School. Participating students meet on Saturdays for classes and there are currently 27 children involved in the programme.

In the lead-up to Youth Day, the foundation provided Maverick Citizen with some of the artworks and photographs produced by young members of the programme, capturing the challenges faced by the youth and their ability to rise above adverse circumstances.

During his high school years, Mbele-Radebe first studied at a township high school, Pace Commercial College. He later received a scholarship to St Stithians College, a prestigious private school. The stark differences in education and opportunities he observed between these two environments motivated him to create a platform to assist learners in need.

“When I finished matric, I told myself that no, I’m going to my first primary school, which is Kholwani [Primary School]. I need to [give] back in a way,” said Mbele-Radebe.

In 2011, he founded the Sandis’ Ubuntu Foundation and worked to convert a storeroom at the school into a library. The library was christened Signature Library in 2015. Those who donated books to the space were encouraged to leave personal messages and signatures inside each one, said Mbele-Radebe.

“When you give a book that has shaped you, it must have meaning also. We wanted to create a personal feeling between yourself and the library,” he explained.

The Signature Gallery was established in 2020, after the Ford Foundation became a benefactor of Mbele-Radebe’s organisation. The art programme began that same year, with the gallery serving as a space to display works produced through the programme.

“What we wanted then was, [to] use art to attract these kids who are not academically able, so that they can utilise the space,” said Mbele-Radebe. “Even if they come and just… browse through the images… I wanted them to be part and parcel of the library.”

While Mbele-Radebe mainly works with the book club at the library, he also assists with the Signature Gallery by coming up with themes and curating the works produced. The instructors for the art programme include Theo Khuvutlu, the fine art facilitator, and Thando Makhubu, the visual art facilitator.

“This programme — all of it from the books, the library itself, Signature Gallery, every part of it — it’s youth-led,” said Mbele-Radebe. “These are people who have volunteered their time and effort to contribute to greatness, and they’re using their skills to help our community to grow on its own.”

The foundation aims to launch an online art gallery by August.

Young people in the Jabulani community are confronted by a number of challenges, including socioeconomic issues, gender-based violence and academic inequalities, said Mbele-Radebe. They face a lack of opportunities and poorly equipped schools, even as they are exposed to high levels of corruption in government.

“When you check the corruption of government… how much is wasted… as a young person it tells you that there are definitely opportunities in South Africa to create something… yet what limits us is the voice — where is the voice of us, as young people?”

The Sandis’ Ubuntu Foundation’s art programme has served to create one such safe discussion space for youngsters in the community. It not only provides educational initiatives they can look forward to, but also mentors from whom they can learn.

“We want to contribute to creating future citizens of South Africa who are aware and alert that yes, as much as there are challenges, there are also opportunities,” said Mbele-Radebe.

“We do not want them to take their circumstances from home and [have this] prevent them from seeing the light.” DM/MC