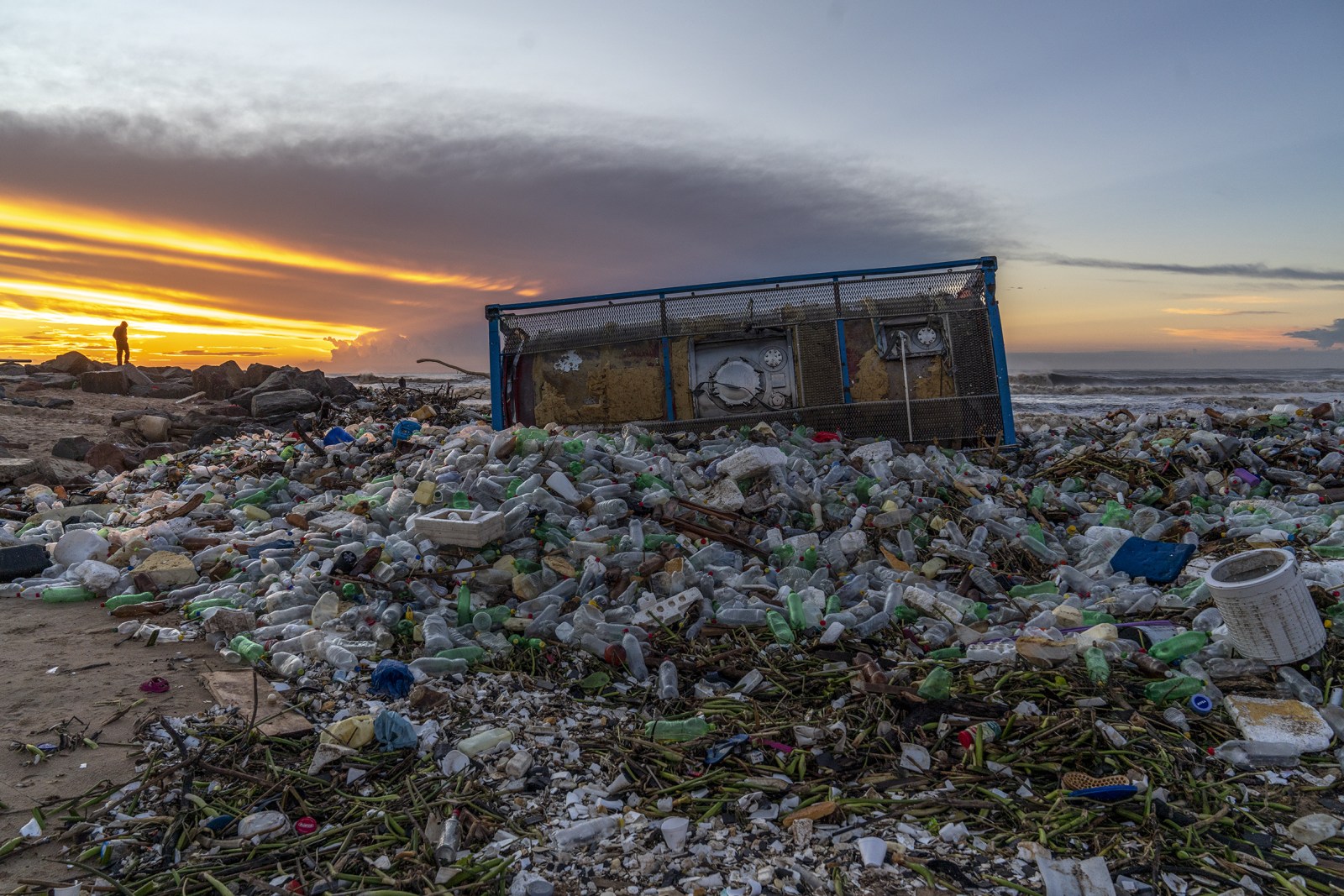 A stripped tanker and litter as seen strewn along a beach after floods wreaked havoc in Durban, KwaZulu-Natal. 13 April 2022. (Photo: Shiraaz Mohamed)

During the Resilience oceanographic research cruise on the RV Marion Dufresne in early May 2022, we recorded the amounts and types of litter floating at sea off the east coast of South Africa. It was clear that the devastating April floods dumped huge amounts of litter into the sea.

The April floods in KwaZulu-Natal resulted in the deaths of over 440 people and caused catastrophic damage to infrastructure, but one of the most visible impacts was the massive amounts of litter and other debris washed up along beaches in the area.

Over the Easter weekend alone, more than 40,000 bags of litter were collected from Durban’s beaches. For many years, poor solid waste management in many communities has resulted in large amounts of litter accumulating in river catchments around Durban.

And despite efforts to trap this litter in rivers (e.g. the LitterBoom Project), we have become accustomed to pictures of thousands of plastic bottles and other litter washing up on Durban beaches following rain events. It is thus not surprising that the devastating April floods dumped huge amounts of litter into the sea.

What is less well known is what happens to the litter once it enters the sea. Clearly, some of it quickly washes ashore. A recent study by researchers from the University of Cape Town’s FitzPatrick Institute of African Ornithology (Maclean et al, 2021, Marine Pollution Bulletin 173: 113078) showed that litter from Durban’s Mgeni River is transported north towards Mhlanga with the inshore counter-current.

At least 65% of marked litter items washed ashore, with buoyant items being more likely to be recovered on beaches than items closer to the density of seawater, such as flexible packaging (bags and wrappers). It is thus not surprising that drink bottles dominate the mountains of beach litter following the April flood.

During the Resilience oceanographic research cruise on the RV Marion Dufresne in early May 2022, we recorded the amounts and types of litter floating at sea off the east coast of South Africa.

There was no evidence of elevated litter levels in the Agulhas Current off northern KZN (0.2 items/km), but litter was abundant inshore of the current off Durban and south to the Pondoland coast. The presence of large amounts of terrestrial vegetation indicated that the litter was derived from land-based sources.

Much of the litter and vegetation was colonised by goose barnacles, so it had been at sea for a few weeks, consistent with it resulting from the April flood. This was confirmed by the very high proportion of items from South Africa, including one dairy tub lid with a “best before” date of 9 November 2010, which presumably had been trapped in a wetland for a decade.

The composition of the flood litter differed from that typically seen at sea off South Africa. Flexible packaging was much more frequent (70% of identifiable litter items) than is usually the case (20%), and bottles were unusually scarce (8%, compared to 27%). PET drink bottles were particularly rare, comprising only 0.5% of flood litter items, which contrasts strikingly with their dominance on beaches. This finding is similar to the experimental trials showing that most buoyant items wash ashore shortly after entering the sea.

Immediately east of Durban, the density of litter averaged close to 300 items/km inshore of the current, but abruptly decreased 50 km offshore, as we crossed into the Agulhas Current, where the density was 0.3 items/km. Repeated transects into the Agulhas Current farther south confirmed that the current acted as a barrier to offshore transport, trapping flood litter in coastal waters and transporting it mainly southward along the coast.

Incidentally, regular beach cleaners in the Algoa Bay area reported on social media that litter started washing up approximately four weeks after the flood. Once again, the presence of goose barnacles indicated that the litter had spent three to four weeks at sea. It is likely that the Durban flood litter will continue to be deposited along the east and south coast for weeks to come.

Our observations confirm the impact of flood events on marine litter, especially plastic items, which made up over 99% of all man-made litter items observed at sea. There is an urgent need for better waste management on land to avoid large amounts of plastic entering the sea as severe weather events such as the Durban floods become ever more frequent due to climate change. DM

Professor Peter Ryan is from the University of Cape Town’s FitzPatrick Institute of African Ornithology and Professor Lorien Pichegru is from Nelson Mandela University’s Institute for Coastal and Marine Research.