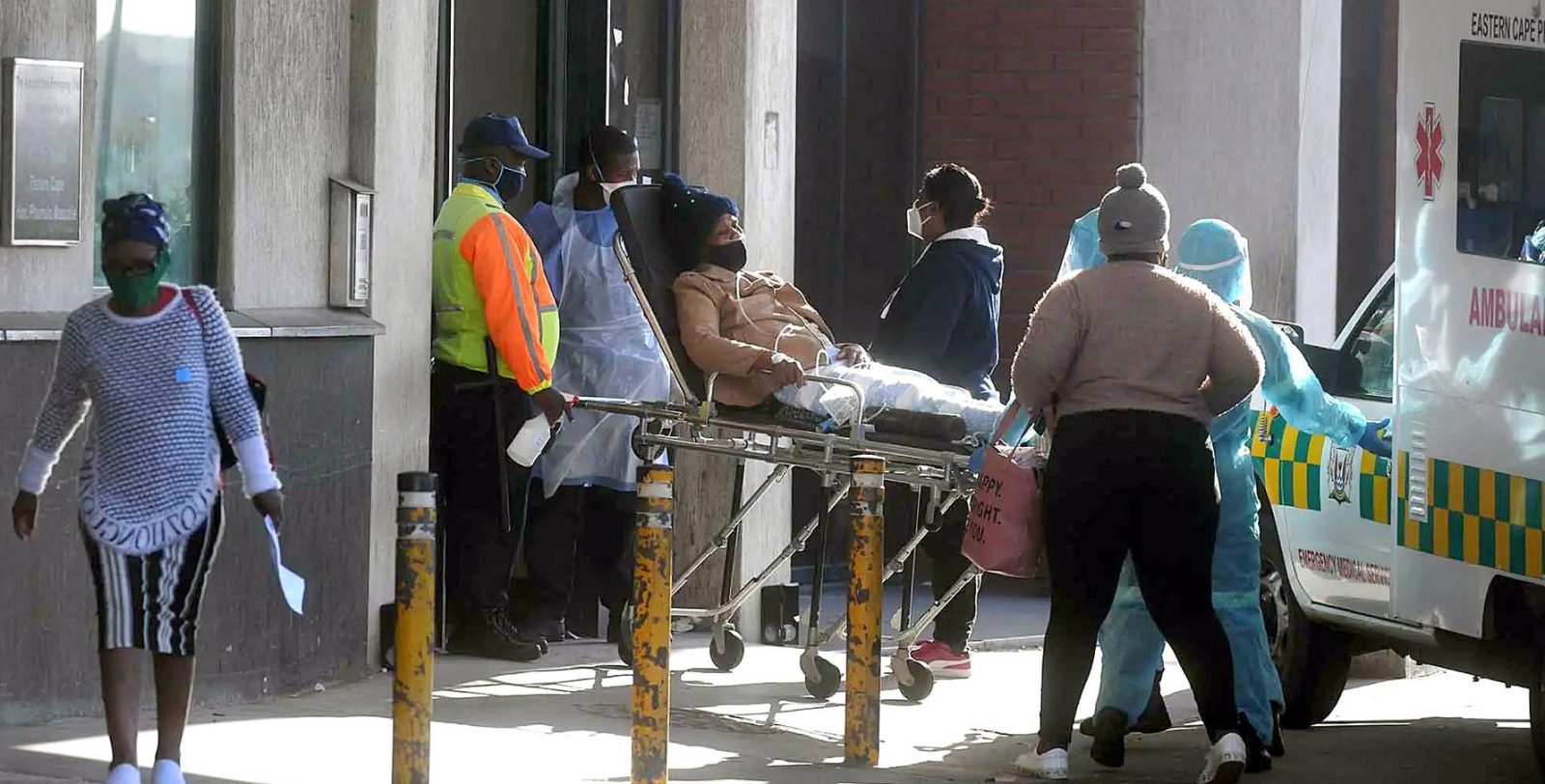 The risk of a hospitalised person dying from Covid-19 in the Eastern Cape was almost double (1.9 times) the risk of someone dying of the disease in the Western Cape, according to a study recently published in the South African Journal of Science. (Photo: Black Star/Spotlight)

The authors of a study published in the ‘South African Journal of Science’ say understanding the relationship between race and other demographic characteristics with Covid-19 hospitalisation and mortality is important to address effectively the burden of disease among the most affected populations and to inform public health policy.

The risk of a hospitalised person dying from Covid-19 in the Eastern Cape was almost double (1.9 times) the risk of someone dying of the disease in the Western Cape. In the largely rural provinces of Limpopo and KwaZulu-Natal, the risk of hospital patients dying from Covid-19 was respectively 1.7 and 1.5 times that in the Western Cape. This is according to a study recently published in the South African Journal of Science.

Principal author Dr Waasila Jassat, a public health medicine specialist at the National Institute for Communicable Diseases (NICD) says there is a “huge” difference in risk of Covid-19 mortality between provinces even after accounting for age, sex, comorbidities, and admission to either private or public hospitals.

“We know that Eastern Cape, Limpopo, and KwaZulu-Natal have many rural communities with big health access challenges. However, the data also reflects the difference in quality of care in the different provinces,” she says.

The study authors compared demographic characteristics and trends in Sars-CoV-2 admissions and the healthcare received. They found that being male, being older, and black (Black African, Coloured, and people of Indian descent) not being white were risk factors for Covid-19 mortality.

Jassat says the study confirms others conducted in the United Kingdom, United States, and Brazil and various systematic reviews that found black and minority ethnic groups had a higher risk of mortality and severe disease due to poor access to healthcare services.

“This South African data confirms black, coloured, and people of Indian descent had a higher mortality rate and that those using the public sector had a higher risk of dying as they had less access to ICU and ventilation which could be lifesaving for Covid-19 treatment,” she says.

Breakdown of admissions and deaths in hospital

The authors say the findings show the need for collecting data on socio-economic status and race together with age and sex to identify populations most vulnerable to Covid-19.

The study found fewer black African people and more white people and those of Indian descent were admitted in the private sector, reflecting health insurance coverage by race group in South Africa.

The study found that almost half (47%) of all admissions were in the private sector in spite of only 16% of the population having access to medical insurance and private health care.

Jassat says this result was “surprising” but explained that this may be due to more availability of beds in the private sector and a lower threshold for admitting Covid-19 patients. “Patients with milder symptoms may have been admitted to the private sector as a precaution. Whereas in the public sector, only the most severely ill got admitted, we know our excess mortality is three times higher than our reported Covid-19 mortality. So many patients just died at home without being tested, without being treated, or getting to a hospital.

“I think the stats tell us the private sector were more able to admit patients with lower criteria for admission and the public sector just struggled with only the very ill admitted, which is why the mortality is so high,” she says.

The study authors argue that transformation of the healthcare system is “long overdue”, including “narrowing the gap in resources between the private and public sectors”.

Jassat says the data shows a lower proportion of patients in the public sector were in ICU, ventilated, or treated with supplemental oxygen, which highlights the inequity of resources between the public and private sectors, including hospital beds, healthcare workers, and equipment such as ventilators and oxygen.

According to the study, patients were more likely to get supplemental oxygen in the private sector (46.3%) compared to the public sector (37.4%) overall across all age groups older than 20 years of age. In the public sector, black African patients received the lowest percentage of supplemental oxygen (46.4%) with the highest being received by those of Indian descent (57.9%) and for whites at (55.3%). In the private sector, the lowest percentage of patients to receive oxygen was black African patients (43.6%) and the highest percentage was for white patients at 63.3%.

There were also differences in treatment in ICU and ventilation by race and health sector. There was less inequality in the private sector, where black groups with the highest risk of mortality were most likely to be treated in ICU or ventilated. Jassat says in the public sector, black African patients were less likely to have been admitted to ICU and ventilated than white patients even though they have a higher risk of mortality. “This could be due to black patients being more likely to access care in rural district hospitals that had no ventilators or ICU available.”

Jassat says the high prevalence of comorbid diseases may play a role in the increased severity of Covid-19 in people in South Africa. Referring to the study, she says 40.4% of black African patients reported having comorbidities compared to white patients (45.6%). However, 31.6% of comorbidities were unknown for black people while the unknown for whites was a lot less at 14%.

While it is well known that HIV and tuberculosis prevalence is highest among black Africans, Jassat says the South African Demographic and Health Survey (2021) has suggested a very high rate of hypertension, diabetes, obesity, and undiagnosed and poorly controlled disease for black African people putting them at higher risk of mortality.

Overall, when you analyse all the deaths over admissions in the country, blacks and older people were more likely to die, says Jassat, adding that even within race groups the risk for mortality differed by age and sex.

For black Africans, there is a much higher risk of mortality in younger age groups (younger than 39 years of age) compared to whites, coloureds, and people of Indian descent.

Jassat says the risk of mortality increased with age, but there were proportionally more Covid-19 deaths reported among young people compared to those in high-income countries. The study says that globally, deaths in individuals younger than 70 years accounted for 13% of all deaths in wealthy countries and 63% in low- and middle-income countries. The study authors say that “in our analysis, 67% of deaths were in people younger than 70 years”. Higher prevalence of comorbid conditions and challenges in access to hospitals and critical care drive poorer outcomes in developing countries, they say.

Jassat explains that black females are more likely to work as frontline healthcare workers and so they are more likely to be affected, and they are less likely to have access to testing and care. The study authors say during the pandemic, women in South Africa, especially women of colour, “struggled to find shelter as they tackled poverty, unemployment, gender-based violence, and food insecurity”.

The study authors say an understanding of the relationship between race and other demographic characteristics with Covid-19 hospitalisation and mortality is important to address effectively the burden of disease among the most affected populations and to inform public health policy.

Jassat says a recent study conducted by the South African National Blood Service (published as a preprint and not yet peer-reviewed) confirms big differences in access to health by race and socio-economic class. The study distinguishes between those who had been vaccinated and those with prior infection.

Jassat says, “Among whites, there were lower levels of infection and higher levels of vaccination. The study suggests that whites were better able to shield themselves from infection. Black workers, essential workers, use public transport and live in homes where they were not easily able to isolate. So Covid-19 swept through these communities.

“But it’s not just a white or black issue. It’s a class issue. People with higher socioeconomic status were probably better able to prevent infection and get vaccinated,” she says. DM/MC