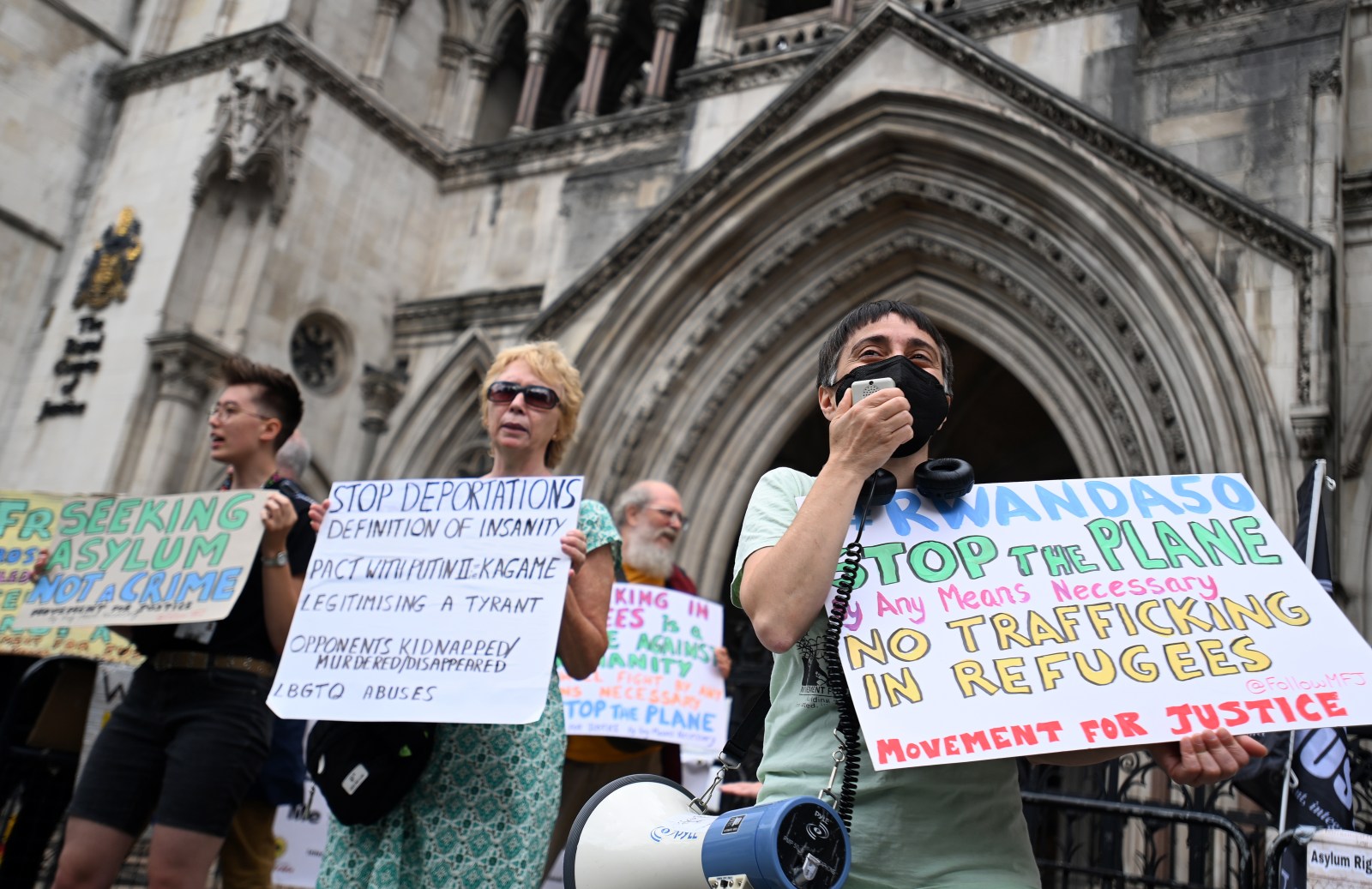 Human rights activists protest against the British government's migrant policy, outside the High Court in London, Britain, 13 June 2022. Campaigners are appealing against a scheme designed to crack down on migrants that intends to provide those deemed to have arrived unlawfully with a one-way ticket to Rwanda. Some thirty people are due to be flown to the African country on 14 June, if the High Court rules against the appeal. EPA-EFE/ANDY RAIN

Britain has agreed a deal with Rwanda to send some asylum seekers to Rwanda in return for an initial payment of 120 million pounds ($148 million) and additional payments based on the number of people deported.

The government says the deportation strategy is aimed at undermining people-smuggling networks and stemming the flow of migrants risking their lives by crossing the English Channel in small boats from Europe.

Initially, some 37 individuals were scheduled to be removed on the first flight to Rwanda, but the number has dwindled in the face of legal challenges. But a lawyer for human right groups said there may now only be 11 people on board.

The government has not provided details of those selected for deportation, but charities say they include people fleeing Afghanistan and Syria.

Prime Minister Boris Johnson is determined to press ahead with the policy despite the legal challenges and opposition, reportedly including from Prince Charles, the heir to the British throne.

“It’s very important that the criminal gangs who are putting people’s lives at risk in the Channel, understand that their business model is going to be broken and is being broken by this government,” Johnson told LBC radio.

“They are selling people false hope and luring them into something that is extremely risky and criminal.”

Human rights group say the policy is inhumane and will put migrants at risk. The UNHCR has said Rwanda, whose own human rights record is under scrutiny, does not have the capacity to process the claims.

The Court of Appeal began hearing arguments from two human rights groups and a trade union on Monday after a judge refused their request for an injunction blocking the flight taking off.

The judge said on Friday there was a “material public interest” in allowing the government to pursue the policy”.

Raza Hussain, the lawyer for some of the claimants, said the judge had not given enough weight to the concerns of the UNHCR, which had warned that some asylum seekers could be sent back to a country where they would be at risk of persecution.

The High Court will separately later hear arguments from Asylum Aid, a refugee charity, which launched a second legal challenge to stop the government flying refugees to Rwanda.

The charity said the government’s plan to give asylum seekers seven days to obtain legal advice and to present their case to avoid deportation is flawed and unfair.

This case will be heard by the same judge who on Friday rejected the first request for an injunction.

Over the weekend, Prince Charles was reported by The Times newspaper to have privately described the government’s policy as “appalling”. A spokesperson for Charles did not deny he had expressed personal opinions about the policy but said he remains “politically neutral”.

By Andrew MacAskill and Michael Holden

(Reporting by Andrew MacAskillEditing by Chris Reese and Angus MacSwan)