Warrick Gelant is the solution to a nagging Bok issue

Warrick Gelant is the solution to Nienaber’s nagging Bok headache 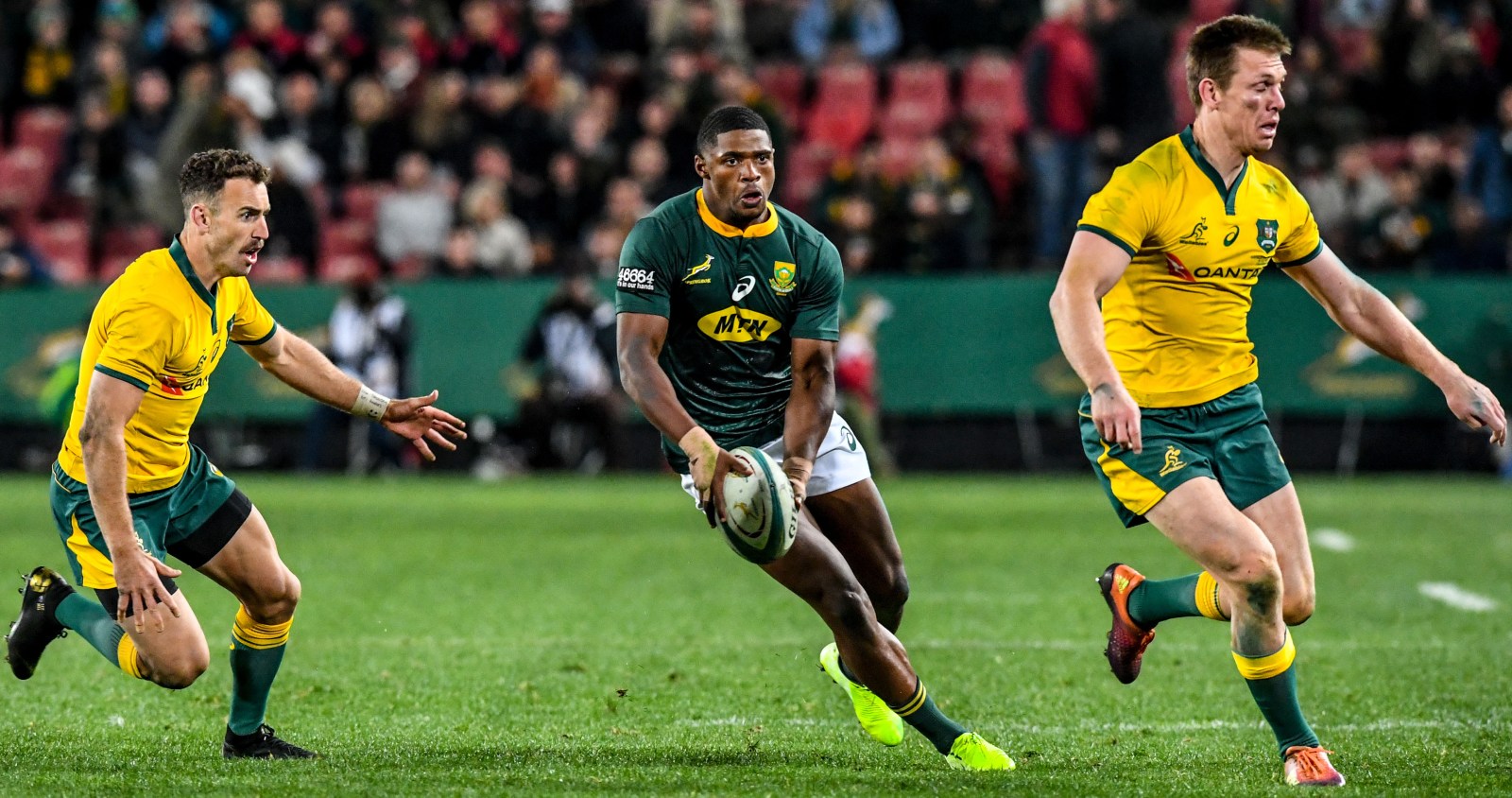 Warrick Gelant of the Springboks with possession during the the Rugby Championship match between South Africa and Australia at Emirates Airline Park on 20 July 2019 in Johannesburg, South Africa. (Photo: Sydney Seshibedi / Gallo Images / Getty Images)

Flyhalf and fullback are the positions giving Springbok coach Jacques Nienaber a headache.

Springbok coach Jacques Nienaber will name a 42-man squad for the upcoming series against Wales over the course of the next week. Players of interest from the Bulls and Stormers will join the Bok camp once those teams have completed their respective United Rugby Championship campaigns. The Boks who ply their trade in Europe will link up with the national squad as soon as they are released by their clubs.

Nienaber and his coaches have been working with 17 players at a training camp in Pretoria over the past week. The group features players from the Sharks – who were eliminated from the URC at the quarterfinal stage – as well as a clutch of Japan-based Bok veterans.

There’s been plenty of speculation about who will feature in the squad and who will be surplus to requirements. The Boks have staged several alignment camps over the past few months, and the omission of Bulls flank Marcell Coetzee and Stormers duo Warrick Gelant and Evan Roos has led many to believe that these star performers are not on the radar. South African rugby is spoiled for choice in the loose-forward department, and several outstanding players are going to miss the final cut.

The bigger concern is at flyhalf and fullback, where Nienaber will need to think outside the box in order to fill the gaps.

Jantjies uncertainty a worry for Boks

Handré Pollard and Elton Jantjies have been the mainstays at flyhalf during the Rassie Erasmus-Nienaber era, with Morné Steyn the only other player selected to start at No 10 since 2018. Utility backs such as Damian Willemse and Frans Steyn have long been viewed as flyhalf options.

And yet, the flyhalf situation has changed dramatically. Jantjies was arrested after an incident on a flight from Dubai to Johannesburg last month. He faces charges of malicious damage to property. The matter is expected to come to a head in Kempton Park Magistrates’ Court on 17 June.

In the interim, Jantjies will continue to train in Pretoria. This past week, Nienaber defended the inclusion of Jantjies and said that the player would be treated as innocent until proven guilty. It remains to be seen whether SA Rugby will take any disciplinary action should Jantjies be charged.

Willemse sustained a serious arm injury on the eve of the URC quarterfinals and was expected to be sidelined for six to eight weeks. Subsequent scans have revealed that the damage to his arm is not as bad as initially feared and he has been cleared to play for the Stormers in the semifinals.

It’s good news for the Stormers, and for the Boks. There was a seven-day period when Boks – who have not developed many flyhalf options over the past few years – were looking decidedly thin in that position. Regardless of Willemse’s latest recovery, they remain one or two injuries away from a serious flyhalf crisis.

Frans Steyn has been sidelined for three weeks with a hamstring injury. It’s hoped that the 35-year-old will bounce back to feature for the Cheetahs in the Currie Cup playoffs. His absence may also leave the team light on midfield options, and necessitate a recall for André Esterhuizen, who’s been tearing it up for Harlequins in the English Premiership.

Bulls flyhalf Johan Goosen has been working with the Boks at the training camp, but is recovering from a long-term knee injury and is unlikely to return to the playing field until after the Rugby Championship.

Manie Libbok (Stormers) and Jordan Hendrikse (Lions) – the two outstanding young flyhalves in the URC – will travel with the Blitzboks to the Commonwealth Games next month.

Although it’s a great opportunity for Libbok and Hendrikse, South African rugby may have been better served by the inclusion of one of these players in the Bok squad.

Last year, Willie le Roux was the first-choice fullback, and Willemse – who started two Tests at No 15 – was the alternative. If Willemse is sidelined at any point this season, the Boks will have no like-for-like replacement for Le Roux in the squad.

Aphelele Fassi is a gifted ball-carrier and finisher, but lacks Le Roux and Willemse’s ability to slot in at first-receiver and manage the game. Gelant does possess this skill set, and has been performing the “second flyhalf” role for the Stormers during the URC.

One could forgive the Bok selectors for omitting players such as Roos, Coetzee or Elrigh Louw from the final squad of 42, given the quality of the loose forwards who have played for Nienaber and Erasmus over the past four years. Siya Kolisi, Pieter-Steph du Toit, Duane Vermeulen, Kwagga Smith, Dan du Preez and even a utility option like Franco Mostert should be in the mix.

The omission of Gelant, however, would make little sense. Wing S’bu Nkosi has been ruled out of the series against Wales owing to injury, so there is a vacancy in the back-three department. Gelant is a 2019 World Cup-winner with a good understanding of the present game plan and structures, and is playing the best rugby of his life.

Selecting him for the series against Wales should be a no-brainer. DM168