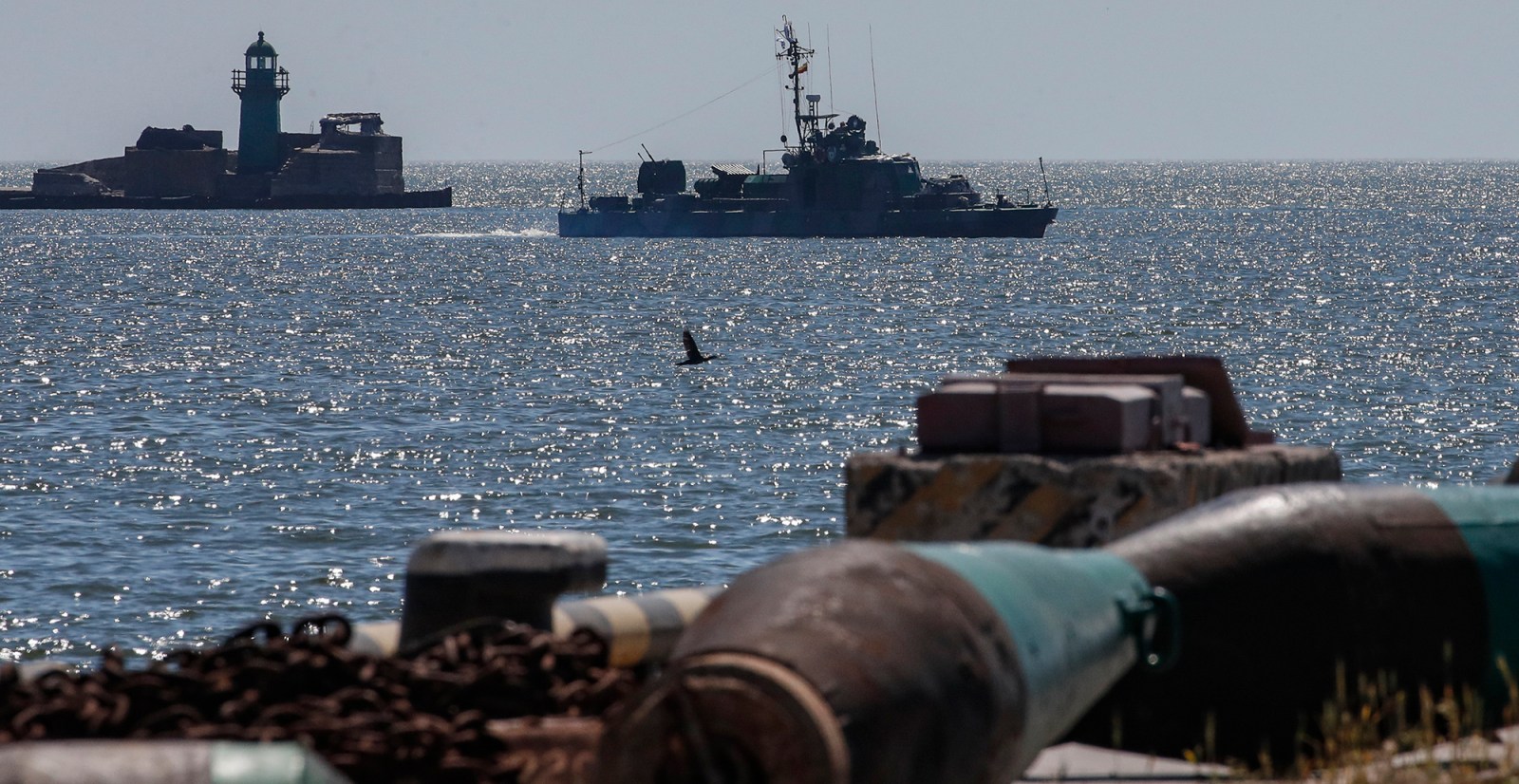 A photo taken during a visit to Mariupol organised by the Russian military shows a Russian navy ship in the cargo port of Mariupol, Ukraine, 12 June 2022. Russian Defence Minister Sergei Shoigu said the ports of Mariupol and Berdyansk in Ukraine were operating normally and were ready to ship grain. (Photo: EPA-EFE / Sergei Ilnitsky)

At least 22 people were injured in Russian missile attacks in western Ukraine that also damaged part of a military facility and four apartment buildings. The last bridge connecting Sievierodonetsk to the rest of Ukraine came under heavy artillery fire from Russian forces.

Russia celebrated a patriotic holiday, with President Vladimir Putin handing out awards to scientists and cultural figures at a Kremlin ceremony.

The North Atlantic Treaty Organisation is in close contact with Finland, Sweden and Turkey to address “legitimate Turkish concerns” about terrorism and to move forward with the accession of the two Nordic countries into the alliance, Secretary-General Jens Stoltenberg told reporters. Nato’s summit in Madrid at the end of June “was never a deadline,” he said, but added, “I would like to see this solved as soon as possible.”

Finnish President Sauli Niinisto rebuffed suggestions his country could proceed with its application faster than Sweden, saying the nations “move ahead hand in hand.”

Since Russia was sanctioned, Iranian officials have been keen to revive a stalled project to develop the so-called North-South Transit Corridor that uses Iran to link Russia to Asian export markets.

Russia trying to cut off Sievierodonetsk by shelling last bridge

Russian troops destroyed one more bridge across the Sieverskyi Donets River west of Sievierodonetsk last night and are now trying to cut off the city completely, Ukrayinska Pravda reported, citing Luhansk regional governor Serhiy Haiday. Two of the three crossings have now been demolished and the last one is under fire.

Putin pinned awards on a pantheon of Russian scientific and cultural figures during a televised ceremony on Sunday.

The laureates included an engineer in the country’s nuclear weapons complex, conductor Yuri Bashmet, a columnist for a state newspaper and Academy Award-winning director Nikita Mikhalkov.

Four missiles that hit Chortkiv in the Ternopil region in western Ukraine on Saturday night were launched from the Black Sea, Volodymyr Trush, the region’s governor, said. Part of a military facility and four apartment buildings were damaged, and at least 22 people were injured.

Rheinmetall AG’s first modernised Marder tanks are ready for delivery, CEO Armin Papperger told Bild am Sonntag. “When and where the Marder are being delivered is the decision of the German government,” he said.

It was unclear if the tanks would be sent to Ukraine or to other countries to replace vehicles being delivered there. Germany has faced criticism for being tepid in helping Ukraine with military equipment.

Dialogue with Russia must continue and the European Union will have to find a way to coexist with it on the same continent, the EU’s foreign policy chief said in an interview published Sunday.

European military aid to Ukraine is designed to bolster the embattled nation’s position so that Russia won’t be able to occupy land taken since the 24 February invasion, Josep Borrell was quoted as saying in Le Journal du Dimanche.

European Commission President Ursula von der Leyen said that the executive arm’s opinion on Ukraine’s candidate status to join the EU will reflect “carefully” a lot of progress made by the country over the past decade, but also that “much still needs to be done”.

“I hope in 20 years when we are looking back we can say we did the right thing,” Von der Leyen told a group of journalists on her way back from Kyiv late on Saturday. “The challenge will be to come out of the council with a united position, which reflects the enormity of these historic decisions.”

The company that took over McDonald’s former restaurants in Russia unveiled its new brand, Vkusno i Tochka, as the chain’s flagship restaurant in central Moscow prepares to open on Sunday on a national holiday, Tass news agency reported. The new name translates as Delicious Full Stop.

The US fast-food chain last month sold its network of 850 restaurants in Russia to Alexander Govor, a McDonald’s franchisee, after closing them in March in response to the invasion.

Tycoons, companies wary of being seen at Putin’s flagship forum

The annual St Petersburg International Economic Forum had always been a hot ticket for Russian and foreign business tycoons eager to curry favour with the Kremlin by hosting glitzy parties or announcing major investments.

At least two executives said they plan to leave early to avoid attending Putin’s speech at the event, which in past years was the highlight for the well connected. Some have asked the organisers, Roscongress, not to identify them on their badges at the 15-18 June forum, people familiar with the situation said.

Putin won’t meet executives of foreign companies and international investors during the forum as he traditionally did in the past, his spokesman said in an interview with Tass on Sunday.

Sri Lanka may be forced to purchase more oil from Russia as the island struggles with a severe shortage of fuel amid an economic crisis, the Associated Press reported, citing Prime Minister Ranil Wickremesinghe.

Authorities are attempting to get oil and coal from suppliers in the Middle East, but “may have to go to Russia again,” he said. DM