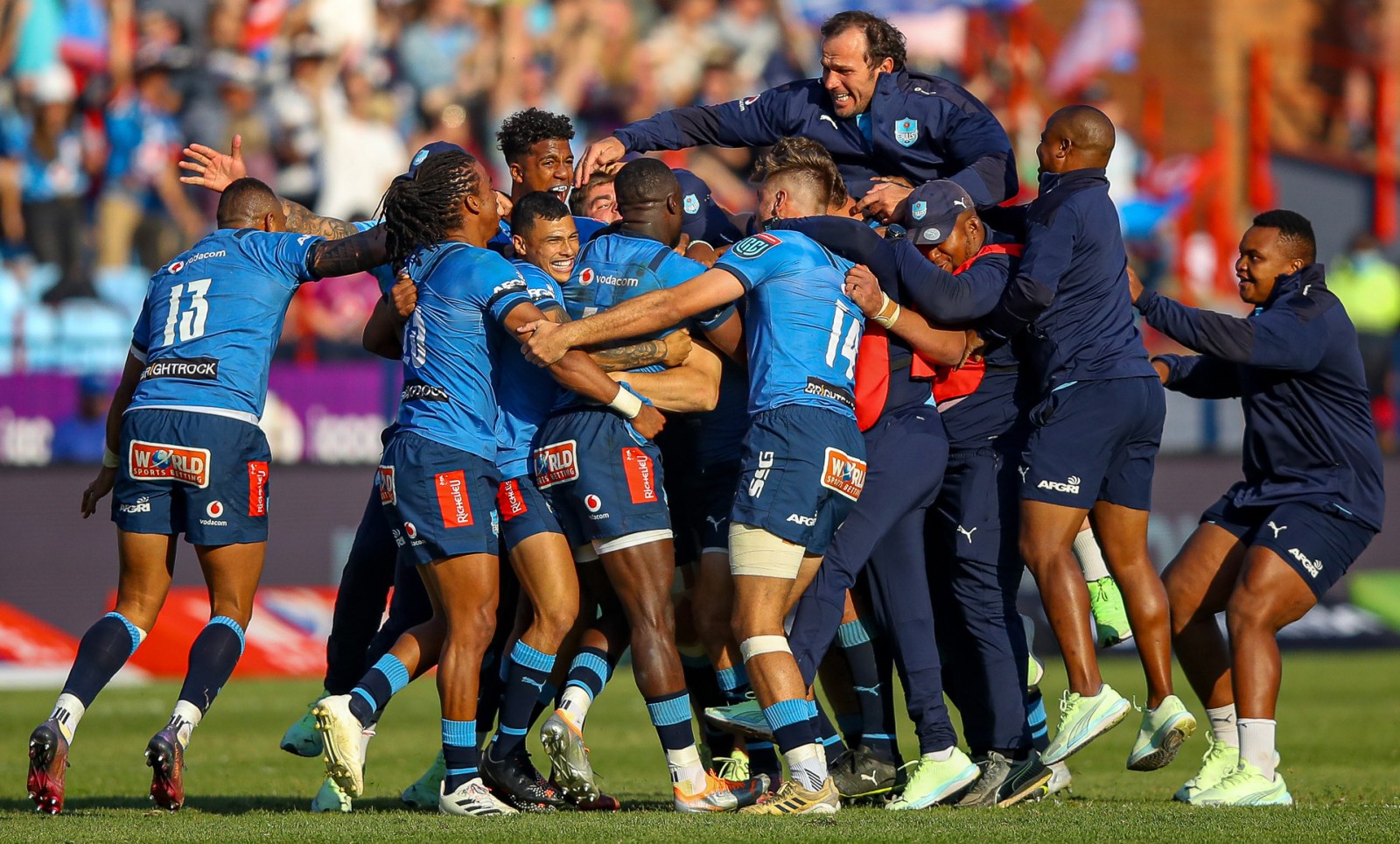 Celebrations all around from the Bulls after Chris Smith kicked the winning drop goal during the United Rugby Championship quarterfinal against the Sharks at Loftus Versfeld on 4 June 2022. (Photo: Gordon Arons / Gallo Images)

The first United Rugby Championship semifinal takes place in Dublin between Leinster and the Bulls on Friday — and the men from Pretoria are out to make history.

Bulls coach Jake White has played down his team’s chances against a formidable Leinster side in their United Rugby Championship (URC) semifinal clash on Friday.

“Leinster have been the benchmark of European rugby. Every year they are either in the playoffs in the European Cup and they have won this tournament four times in a row. People talk about the All Blacks’ dominance at Test level or Barcelona in football. The reality is that Leinster are the benchmark for rugby at club level,” asserted White about his side’s semifinal opponents.

Leinster have suffered only one defeat at the RDS Arena this season in any competition, beaten 20-10 by fellow Irish side Ulster in November.

“I’m a realist. I’ve been coaching for 40 years, I also know you mustn’t get ahead of yourself. The Leinster brand and the Leinster group haven’t landed here by default,” said White.

The Bulls, however, are on a successful run of their own, having lost just one of their last 10 matches in the URC — a 19-17 defeat against the Stormers in April.

“There is a chance, there’s always a chance. If you don’t believe there’s a chance, it’s not going to happen. We are going to give it our best shot — 225 [home] games in Pro14 and they’ve only lost 21, it’s not a bad record,” said White.

The two sides met on the opening weekend of the URC season when the Irish outfit ran out 31-3 winners at the Aviva Stadium.

“I hope they’ll feel they’re preparing for a very different Bulls team to the one they last faced in Dublin. We’ve grown a lot as a group. They gave us a good lesson that day in terms of intensity and accuracy,” White said.

“Literally the same group of players wear Irish jerseys as well so they have a standard in their team that can play at international level, and that’s a great benchmark for us. We have improved, but I’ve no doubt that as they’ve grown together this season that they will also be better.”

White, however, has maintained hope that his Bulls side are capable of overcoming the dangerous Leinster side, despite his team going into the encounter as underdogs.

“One of the exciting things about sport is that people follow teams and they wait for that day where they can say, ‘I was there’,” said White.

The Bulls will take great confidence into the semifinal encounter — against a team filled with Irish internationals — coming off their last-gasp 30-27 quarter-final win against the Sharks, who were similarly stacked with international players — nine Springboks in total.

“One thing that I think this group of players have done really well over the last two years, when there’s been a knockout game they’ve stepped up to the plate and played well,” White said.

“All I can expect tomorrow is that they do exactly the same thing. We’ve got a massive game, probably the biggest game we’ve had since we’ve been together here as a group.”

“There’s enough there for us to be positive and obviously give ourselves a chance tomorrow,” White said.

La Rochelle provided the Bulls with a blueprint of how to beat the European giants in the Champions Cup final — beating them 24-21 — when they didn’t allow Leinster to get too far out of reach at any stage and then grabbed the win late through a combination of keeping the ball at close quarters and excellent forward play.

“A group of players like they’ve got, which they’ve built together is also a daunting task, but I think La Rochelle proved that it is possible, that they are only human,” White added.

“That’s the message that I’ve got with our players. People will remember great games and this could be the making of a great game. We got a great opportunity as a group and I just want them to give it a full crack and believe that they can do it.”

After the La Rochelle defeat, Leinster showed their class a week later by dismantling Glasgow 76-14 in their URC quarterfinal clash.

“You can’t hide, and this is the bottom line. That’s why we’re here. It’s going to be incredible. We’re going to get measured. At this point there is nothing more than for us to be physically ready for the match — our bodies must be ready and mentally we must be ready, because this is going to be a massive game for us,” said White.

White believes there are no apparent weaknesses in the Leinster team and the Bulls will have to be on top of all facets of their game to get a positive outcome.

“We’re also realists. They’re a good team, we’ve got to play well. It’s not a case of where they’re poor. We’re just going have to play well if we want to get a result,” said White.

However, one strength of the Bulls this season has been the relentless nature of their forward pack, the reward for their hard work capped off by lock forward Ruan Nortje landing the “Ironman” URC award — given to the player who has spent the most time on the pitch during the league stages. Nortje averaged an incredible 77 minutes every match.

“Leinster is one of the best teams in the world. We have to embrace that challenge and enjoy it, but also give it our best shot,” Nortje said.

“I always want to challenge myself to become better and not become stagnant. I want to improve. It’s important for me in every game, no matter the opposition, to improve.

“This semifinal is an awesome opportunity for me to test myself against some great Test players. Any player wants to test himself against the best, and what better than Leinster. It’s a massive opportunity to play against such a quality side. I’m looking forward to it.”

The breakdown will be a key battle on Friday, with Leinster particularly boasting the jackalling prowess of Irish international Josh van der Flier. Leinster have been dominant at the breakdown this season, boasting a 96.65% success rate for rucks won in the competition

“They’ve got great poachers in their team, it’s part of their defence system which is well implemented. We always have to be very sharp offensively, going to the breakdown. It’s a key area for both teams. Both teams like to play with a bit of tempo and I’m sure both teams will try to neutralise each other,” said Bulls captain Marcell Coetzee. DM