Here\'s an illustration. Our role is to defend democracy. You don\'t need to read the news every day but we do need to report on it.

If you value the work we do (and we have a sneaky suspicion you do because you\'re here reading it) then help us continue our work by becoming a Maverick Insider member. 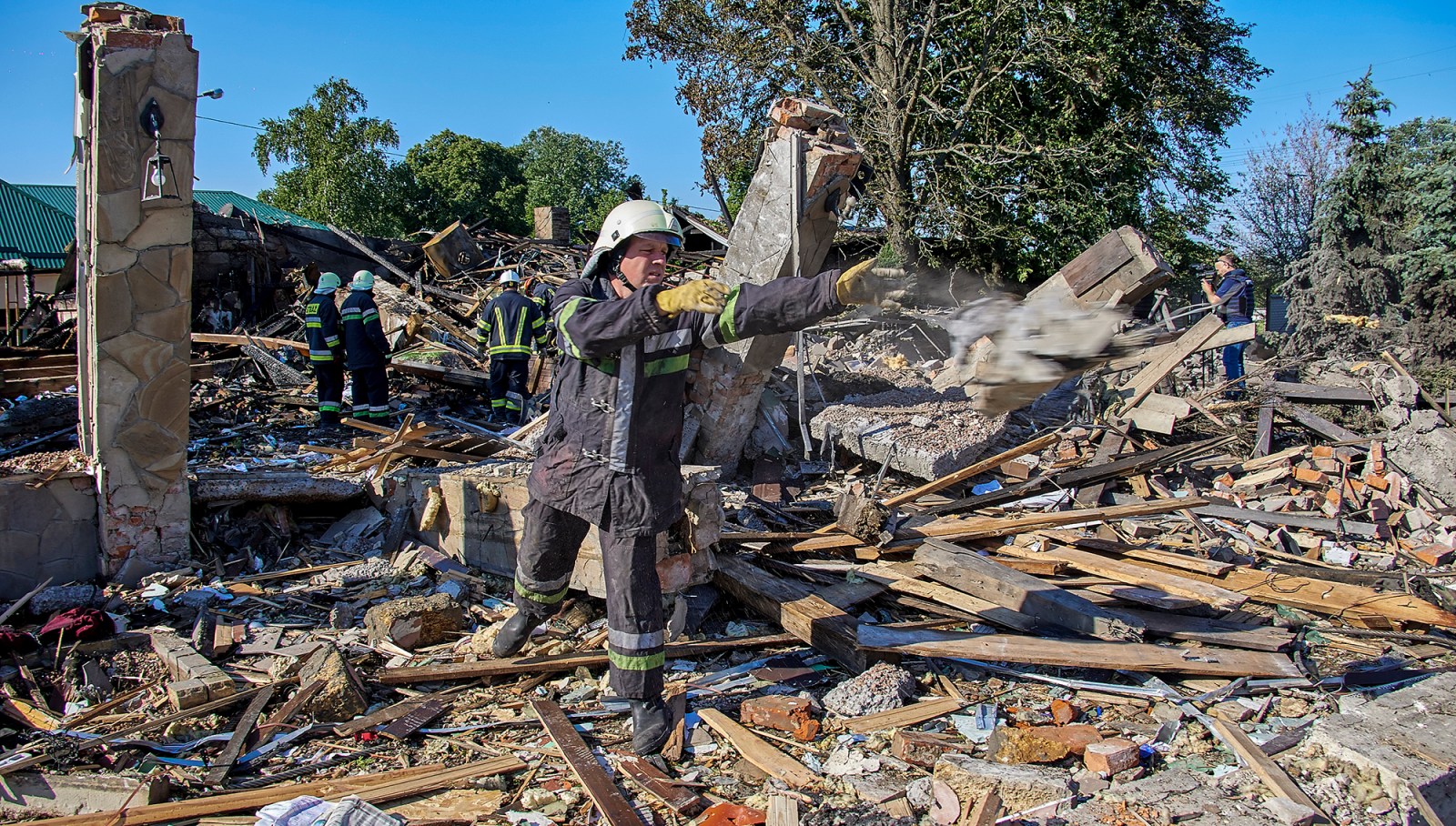 Two captured British fighters and a Moroccan have been sentenced to death by a court in the Russian-occupied Donetsk region of Ukraine and former Russian officials have been installed in top jobs in two occupied regions of eastern Ukraine, as the Kremlin tightens its grip on territories held by its forces.

Russian troops were fighting to capture the city of Sievierodonetsk, and launched an offensive on Slovyansk, in an effort to take the remaining Ukrainian positions in the east. Ukrainian Defence Minister Oleksiy Reznikov said the situation on the front lines was difficult, with Moscow able to inflict major losses despite facing resistance.

Ukrainian President Volodymyr Zelensky urged global leaders to revive the unity they showed during the pandemic and coordinate efforts to deter Vladimir Putin.

The European Union’s executive arm is expected to recommend next week that Ukraine be granted candidate status. The recommendation still needs to be debated and adopted by EU commissioners. A final European Commission opinion, even if positive, would need the approval of member states before Ukraine is officially granted the status.

The bloc’s leaders are set to discuss the matter in Brussels on June 23-24 and several countries have said they’re against the move, saying Ukraine can’t be given preference over existing applicants. The membership process includes an arduous set of steps and conditions that can normally last more than a decade.

Two captured British fighters, Aiden Aslin and Shaun Pinner, have been sentenced to death by a court in the Russian-occupied Donetsk region of Ukraine. The court in the so-called Donetsk People’s Republic said the Britons and Moroccan Saaudun Brahim were convicted of fighting as “mercenaries” for Ukraine, Russia’s Tass news service reported, saying they could appeal and were eligible to be pardoned.

The UK Foreign Office said it was working with Ukrainian authorities on the detained British nationals. “We condemn the exploitation of Prisoners of War for political purposes,” a spokesperson said. “They are entitled to combatant immunity and should not be prosecuted for participation in hostilities.”

Pinner and Aslin were taken prisoner by Russian forces after intense fighting over the southern Ukrainian city of Mariupol in April. Both were later shown in detention on Russian state TV. Aslin served as a marine in Ukraine’s military for four years after moving to the country in 2018, UK Member of Parliament Robert Jenrick said on Twitter in April, citing the captive’s family. UK media have reported that Pinner is a former British soldier who also moved to Ukraine about four years ago.

Moscow-backed separatist governments in two occupied regions of Ukraine’s Donbas have installed former Russian officials in top jobs, the latest sign of the Kremlin’s tightening control over the territories held by its forces.

The so-called Donetsk People’s Republic appointed a former official of Russia’s Ministry of Industry as its prime minister this week, as neighbouring Luhansk installed a former deputy governor from Russia as a top official. A Kremlin spokesman confirmed the appointments were coordinated with Moscow.

The Kremlin has kept a firm grip on the breakaway regions since backing their creation in 2014 but Moscow has taken an even greater role in the months following the February 24 invasion, which has expanded the area under Russian control. Local officials in the occupied zones have suggested they aim to ask Russia to formally annex them. Ukraine doesn’t recognise the Moscow-supported authorities and has vowed to retake at least the territory seized this year.

At least 200 start-ups focused on deep tech projects will be able to apply for up to €60,000 via the EU’s European Innovation Council (EIC), the European Commission announced. The EIC will also help with advisory services and matchmaking.

Ukraine had a “vibrant” startup scene with more than 1,600 startups prior to Russia’s invasion of the country, Innovation Commissioner Mariya Gabriel said in a statement.

“This new action aims to safeguard this progress, reinforce links to the European innovation ecosystem, and ensure Ukrainian startups are well placed to become a critical driver for rebuilding the Ukrainian economy.”

Ukraine needs more weapons to support its defence against Russian forces which are inflicting big losses on the front lines of the war, Ukrainian Defence Minister Oleksiy Resnikov said.

“The situation on the front lines is difficult. Every day we have up to 100 of our soldiers killed and up to 500 wounded,” Reznikov said on Facebook. “The Kremlin continues to press on by sheer mass, stumbles, faces a strong rebuff and suffers huge casualties. But yet still has forces to advance in some parts of the front.”

Ukraine was grateful to the US, UK, Poland and the Baltic states for supplying it with weapons, but the overall amounts and the pace of supply were “absolutely not” satisfactory, he said.

Russian consumers may soon be feeling the impact of its government’s invasion of Ukraine. Major shipping lines like Maersk, CMA-CGM, and Hapag-Lloyd suspended operations shortly after the onset of Russia’s invasion, leaving customers in short supply.

The average number of container ships in Russian waters has dropped by 60% from the November peak, according to Bloomberg calculations. The damage inflicted on Russia by sanctions was on full display as the economy swung into a contraction of 3% in April from a year earlier.

Investors received $500-million for a dollar-denominated bond due on June 7, according to people familiar with the transaction, who spoke on condition of anonymity because they’re not authorised to comment publicly. Lukoil – which isn’t sanctioned – is at the centre of a shrinking pool of Russian companies that have managed to stay current on their foreign debts.

Wide-ranging international penalties, as well as local restrictions on flows of hard currency abroad, make it increasingly difficult for Russian borrowers to get funds into investors’ accounts. The government’s latest coupon payments have yet to make it to bondholders, raising the prospect of the nation’s first sovereign default on its foreign debt in a century. DM