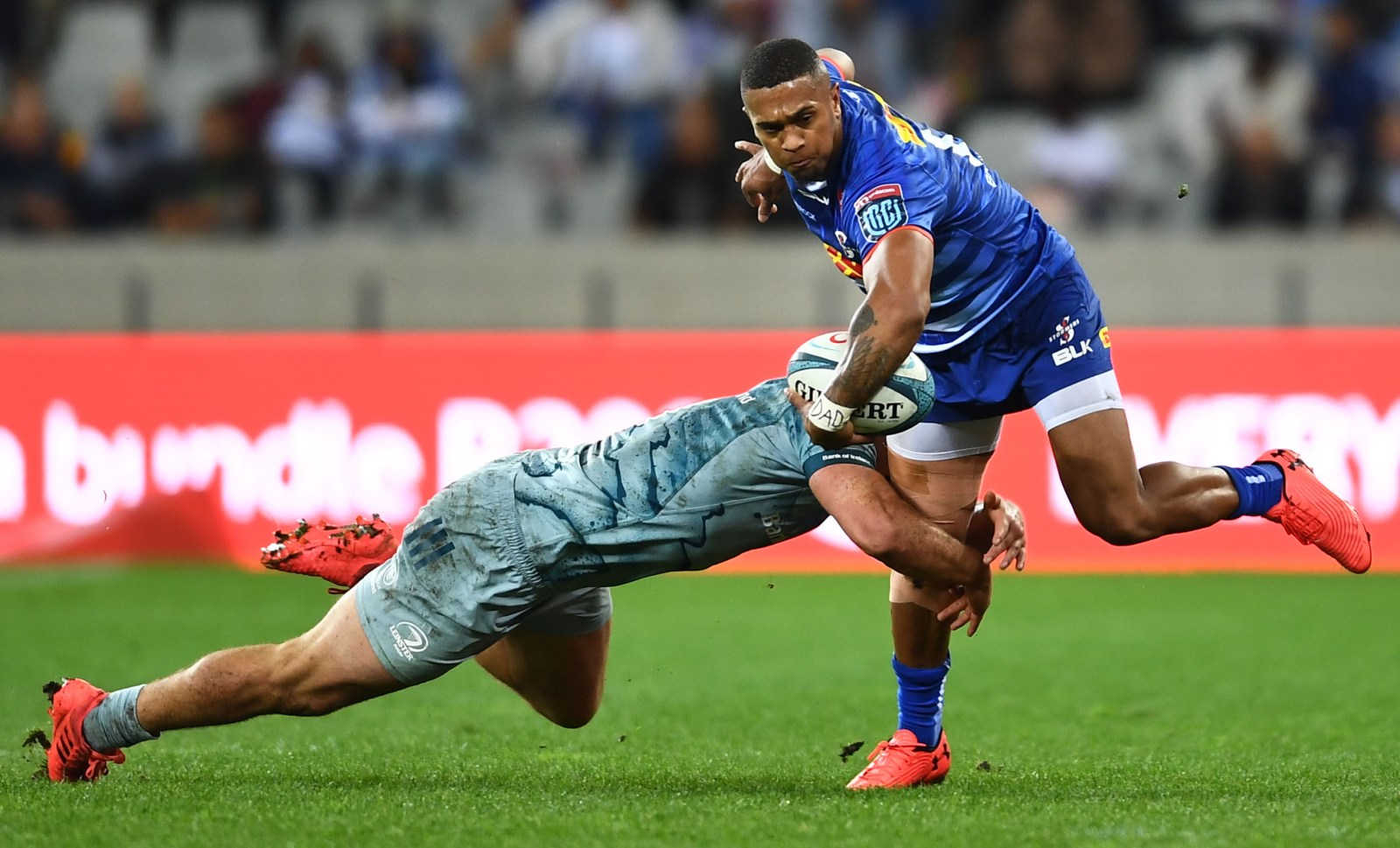 Leolin Zas of the Stormers is tackled by Scott Penny of Leinster during a United Rugby Championship match at Cape Town Stadium on 30 April 2022. (Photo: Ashley Vlotman / Gallo Images)

Try-scoring machine Leolin Zas has resurrected his flagging career at the Stormers in 2022. Here, he reflects on the journey so far.

Stormers winger Leolin Zas has added another triumph in a rollercoaster past few years: this season’s top try-scorer award in the United Rugby Championship (URC).

Zas scored 11 tries in 11 matches over the course of the regular season to end the campaign at the top of the charts – an incredible accomplishment for a player who was close to retiring from rugby a few seasons ago, after breaking out as a potential superstar for the Stormers as a 20-year-old in 2016, displaying electric speed, a wicked side-step and surprising strength.

“It was amazing, I felt like it couldn’t go better, especially because I didn’t expect it to happen at such a young age,” said the 26-year-old.

The Hermanus High School alumnus played every match, at the time, determined to prove himself to everyone watching.

“When you are still young you are trying to prove something. I played for Boland at Craven Week and didn’t come from a big school, so it was always about proving myself. I was a bit reckless in the way I played. When I look back now I can see how motivated I was to prove people wrong and show what I could do,” explained Zas.

“I was the first guy from my school who played for SA Schools and for a major franchise. It was a big thing and I felt a lot of support; still to this day I get messages of encouragement from the people in that community.”

Most players wean off a little the season after their breakout season because of the level of analysis that goes into modern sports, but Zas had a nightmare second season in the top-flight – breaking his leg in two places in a preseason match for the Stormers – ending his season before it had begun.

The determined winger then went to the Sharks in 2018 in an attempt to reignite his career, a move that didn’t bear fruit as Zas slipped down to playing in the SuperSport Rugby Challenge.

The Villiersdorp-born speedster then decided to move back to his home province, but the move followed a similar pattern to his Sharks move.

“He didn’t really land at the Sharks. We got him back here and there were glimpses, but I can’t say he came back to Western Province and it was an instant success story,” said Stormers coach John Dobson about his star try-scorer.

Struggling to recapture nearly forgotten form, scarce playing time and constant niggling injuries frustrated Zas before another blow in 2020 – the loss of his father due to Covid – appeared to spell the end for him as he contemplated retiring from the sport he once seemed destined to succeed in.

However, against all odds, things began to click for the older and wiser winger this season.

Now Lions winger Edwill van der Merwe and Sergeal Petersen started as the Stormers wingers in the first match of the URC season. But Zas started and scored in the next match – in the Stormers defeat to Munster – and has not looked back, scoring at a rate of a try per match in the league stage of the URC.

“I feel more mature, I understand the game better. It is not always just about you, it is also about the small things that you can do for someone else to look good,” said Zas.

“Earlier in my career it was more all about me and what I can do to show the coaches I should be there. Now I know that coaches look at the smaller things where you can add to the team as well.

“I have become more physical. Obviously, you get a bit slower as you get older, but I also realised that I can be more physical and use that as a strength, so I have been focusing on it. It is always a good thing to have more to offer.”

The brand of rugby played by the Stormers this URC season has surprised many – an attacking and running game led by their innovative and seemingly spontaneous backline players – leaving fans jubilant and Zas with more than two hands filled with tries.

“It is not about proving something to make sure I play again next week. I want to enjoy my rugby and do what I know makes me a good player,” he said.

“Before, I was nervous to try things because I was scared of making mistakes and costing the team. I feel like I have more freedom, but that also comes from the coaches giving me that freedom and the type of rugby our team is playing gives me that.

“The players around me make it much easier to do what I do. All credit to the whole backline; I love space and they know that, so if they give me space then I can do my thing.”

When Zas was struggling for form at the Sharks and the Stormers, he spent quite a bit of time outside of the playing squad and was forced to perform rudimentary tasks like holding tackling bags.

“I can understand what it feels like for someone who is holding a tackle bag, because I have been there and I know how it feels,” said Zas

“It can motivate you, because you don’t want to be there, but it also makes you appreciate everything even more if you are playing.”

“It teaches you how to treat someone who is holding that bag, because sometimes you forget that guy also comes in every day and wants to play.

“It is also about enjoying your rugby. There are a lot of things that are out of your control, so I just did the things that were in my control.”

The change in perspective has made Zas more appreciative of the good moments as well, explaining that last April’s clash against Leinster at a blue and white Cape Town Stadium made him “emotional”.

“I actually got a bit emotional, I never thought that I would have that feeling again of the crowd when you run out and the fireworks go off. It is something you can’t explain, to look up and see people sitting on the top tier again, it was another boost for me.”

Zas is still only 26 so there is a lot more to come from the dynamic winger, but for the first time since his breakout season, his career trajectory seems to be firmly upward. DM