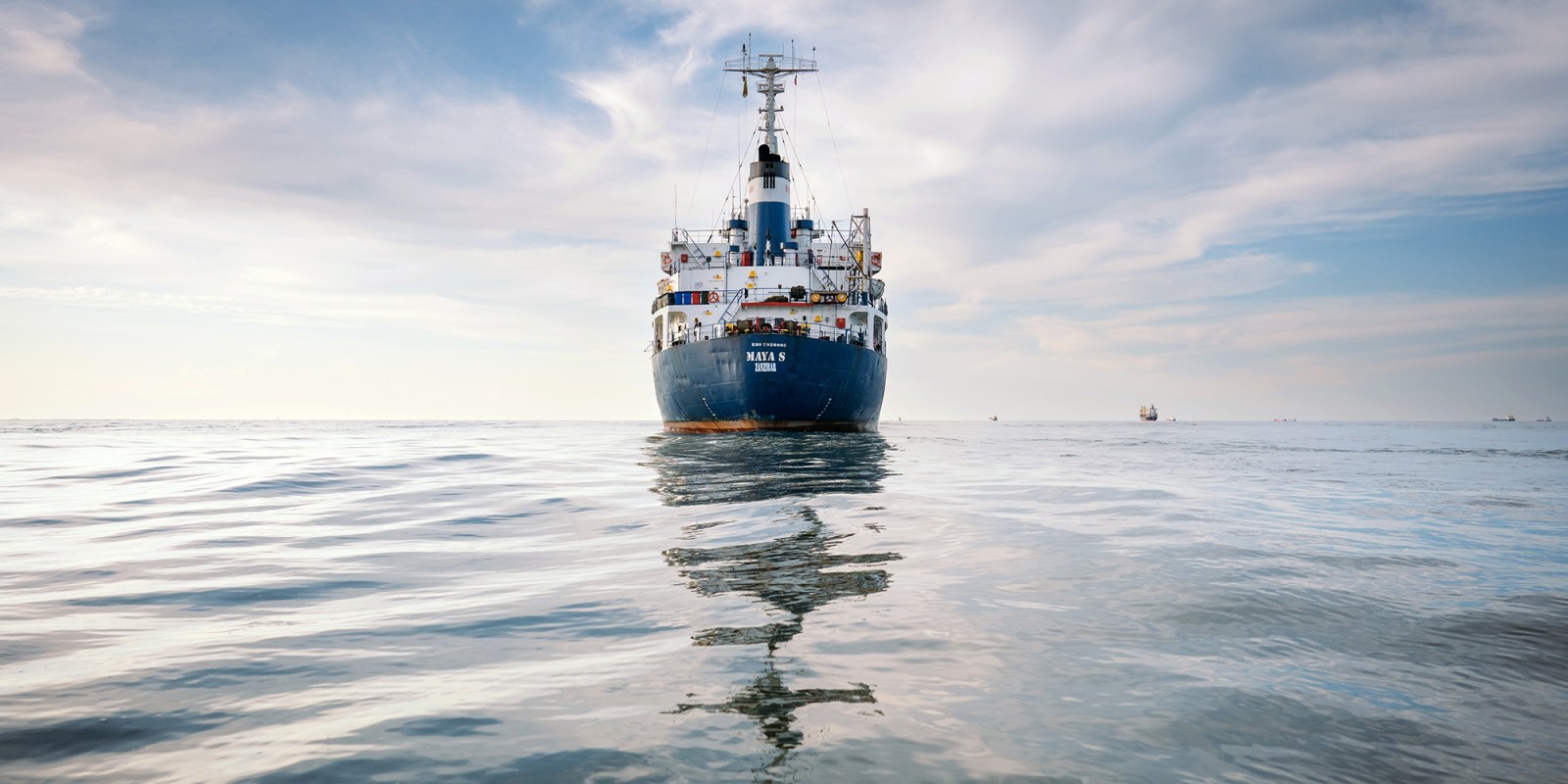 Stationary Maya S cargo ship in the Black Sea wait to enter the Sulina Canal, a river channel that provides access to the Danube River, offshore from the port at Sulina, Romania, on Saturday, 4 June 2022. Ports in Romania are backed up with traffic or already at capacity while there are shortages of specialized personnel to handle the surge in demand as the region desperately tries to figure out how to get grain out of Ukraine. (Photo: Andrei Pungovschi / Bloomberg via Getty Images)

Russian president Vladimir Putin assured the African Union that Russia would ease grain shortages, but the arrangement is far from straightforward.

As Russia’s war against Ukraine intensifies, African countries are increasingly being caught in the crossfire of what is arguably becoming a new Cold War. The latest terrain of this bitter struggle is a wheat war, which is hitting Africans hard.

The antagonists have been trading blame for the rise in world grain prices, especially wheat. According to the African Development Bank, wheat prices on the continent have risen by 60% because of shortages caused by the hostilities.

Russia and Ukraine are major wheat producers and exporters, and supply about 44% of Africa’s consumption, according to the United Nations. Sudden spikes in wheat and bread prices are a particular problem on the continent because food insecurity is critical at the best of times and often fuels instability. Ironically the African Union’s (AU) theme this year is “Strengthening resilience in nutrition and food security on the African continent.”

When Senegalese president Macky Sall, the AU chairperson, and Moussa Faki Mahamat, chairman of the AU Commission, met Russian president Vladimir Putin in Sochi last Friday, grain prices topped the agenda. Sall told Putin the war was causing a food crisis in Africa. “Our countries, even if they are far from the theatre, are victims on an economic level,” he said.

Sall blamed the food crisis on the war itself and the sanctions imposed by the West on Russia in retaliation. He tweeted, “President #Putin has expressed to us his willingness to facilitate the export of Ukrainian cereals,” and that Russia was ready to export its own wheat and fertiliser.

The devil, however, might be in the detail of these reassurances. Sall didn’t publicly say whether Putin repeated Russia’s position that it would let vessels carrying food leave Ukraine only if some Western sanctions were lifted.

Putin insists that sanctions are primarily responsible for food shortages and high prices, citing an embargo on fertiliser to Russia. And he told Russian state television after his meeting with Sall and Faki that Ukraine could export grain from its ports, including Odesa — if it first cleared them of mines.

The United States (US) has meanwhile tried to neutralise Putin’s meeting with the two AU leaders. On Monday, Secretary of State Antony Blinken called Faki to discuss “the importance of ending Russia’s war on Ukraine and its effects on global food insecurity”.

“The Secretary underscored that US sanctions do not prevent the export of Ukrainian or Russian agricultural commodities, including food and fertiliser, nor do they prevent transactions that are necessary for these exports, such as banking or shipping,” the State Department said. “The Secretary emphasised the need for safe passage of all commercial vessels to and from Ukraine’s Black Sea ports.’

Likewise, German foreign ministry spokesperson Andrea Sasse told Deutsche Welle: “The danger is very big that Russia will try, that president Putin will try to establish a narrative that it’s the West that’s responsible for the famine threatening Africa. This is a narrative that we want to strongly resist.” She said the risk of famine was “a result of the Russian war and not the result of Western sanctions.”

Putin’s meeting with Sall and Faki ended without public clarity about the next steps. Would the continent get more wheat — and if so, would it be Russian, Ukrainian or something in between? The New York Times reported that the US alerted 14 countries, most in Africa, that Russia was trying to sell “stolen Ukrainian grain”, especially to drought-affected states. According to Blinken, credible reports found Russia was stealing Ukraine’s grain to sell for profit.

A State Department official told ISS Today: “We have seen the reports of Russia stealing Ukrainian supplies, including maritime automatic identification system (AIS) records that indicate that Russian commercial cargo vessels are departing from near Ukraine with their cargo holds full of grain.” The official added that Ukraine’s Ministry of Foreign Affairs said Russia had seized 400,000 to 500,000 tons of Ukrainian grain worth over $100-million.

The New York Times commented that: “The American alert about the grain has only sharpened the dilemma for African countries, many already feeling trapped between East and West, as they potentially face a hard choice between, on one hand, benefiting from possible war crimes and displeasing a powerful Western ally, and on the other, refusing cheap food at a time when wheat prices are soaring and hundreds of thousands of people are starving.’

The paper quoted Hassan Khannenje, Director of the Horn International Institute for Strategic Studies in Kenya, saying that Africans wouldn’t hesitate to buy stolen Ukrainian grain. “This is not a dilemma. Africans don’t care where they get their food from, and if someone is going to moralise about that, they are mistaken.”

But the paper also quoted Macharia Kamau, Principal Secretary at the Kenyan Ministry of Foreign Affairs, who denied Kenya had received any US alert. “Why would they need to warn us in the first place?” he texted. “Why would anyone buy looted anything? This sounds like a propaganda ploy.”

Would African countries buy stolen grain (assuming it could be identified as such)? Or should they? Jakkie Cilliers, Head of African Futures and Innovation at the Institute for Security Studies (ISS), says it’s a difficult issue. “There are no legally binding sanctions as far as I am aware. But if [the wheat] was indeed stolen, the moral obligation would be not to purchase.”

As Sall told Putin on Friday, Africa has tried to keep out of this war. But there are limits to neutrality, particularly if Russia is fuelling a food crisis so it can look like a saviour.

“This ‘shortage’ is not coincidental,” says ISS Researcher Denys Reva. “On the one hand, Russia’s invasion disrupted Ukraine’s maritime trade and grain exports. On the other, its military is targeting Ukraine’s grain storages. Russia is looking for ways to influence public opinion about the war and increase pressure on Ukraine (via Africa and others) to cease resistance and accept Moscow’s terms.

“In other words, as part of this strategy, all vulnerable countries including in Africa, are meant to feel the impact of the food crisis.” DM