Dear Ndileka Mandela, there is no moral ambiguity in Ru...

Dear Ndileka Mandela, there is zero moral ambiguity in Russia’s invasion of Ukraine 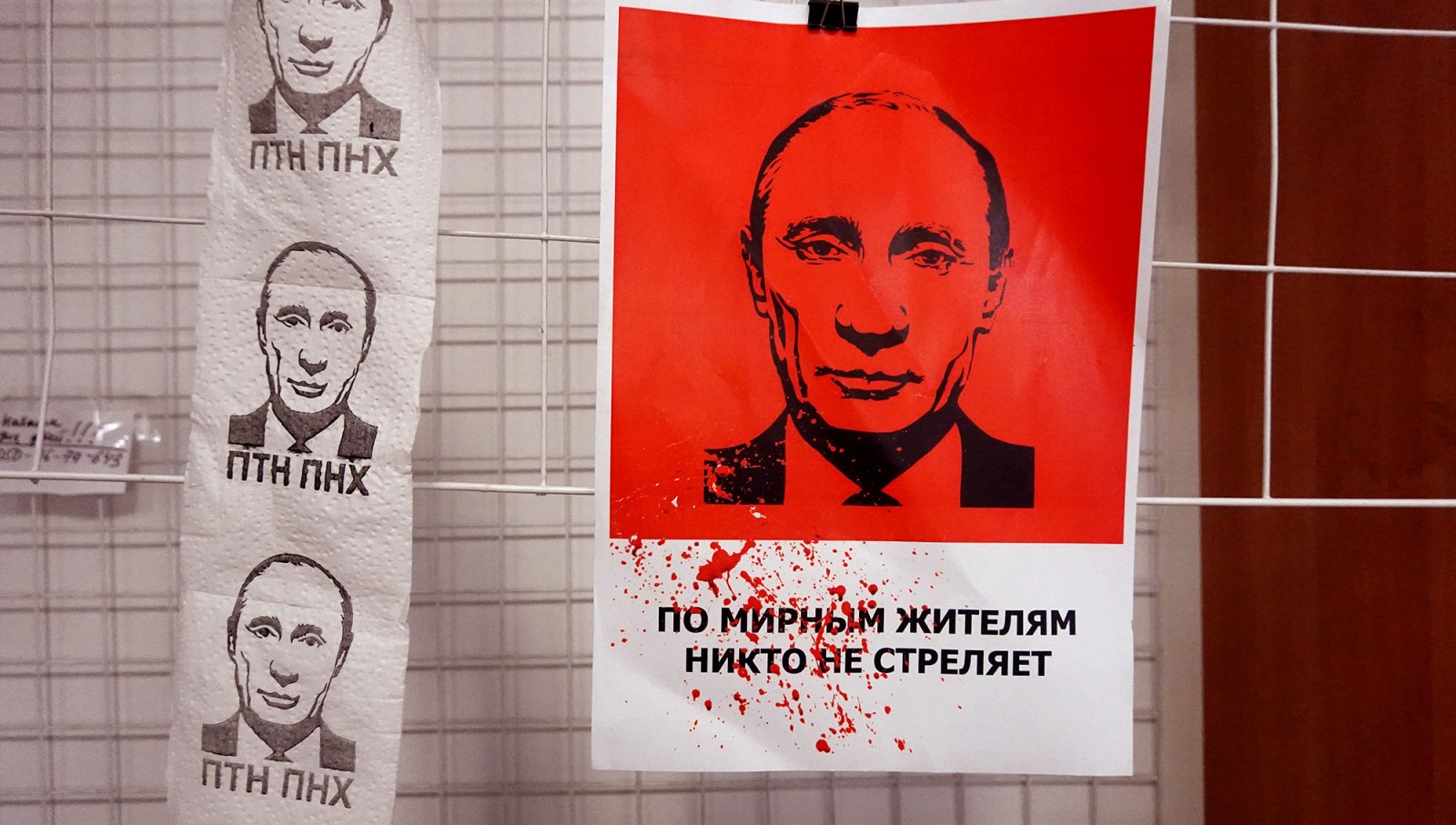 A poster with the likeness of Russian President Vladimir Putin on the wall of a facility that distributes items donated by businesses and individuals to Ukrainian soldiers, 9 June 2022 in Sloviansk, Ukraine. (Photo: Scott Olson / Getty Images)

There is no case for the moral ambiguity that Ndileka Mandela attempts to introduce into the debate. Just as apartheid ended because it was morally and ethically unacceptable to most South Africans, black and white, the war in Ukraine is a struggle between what is good and bad, right and wrong.

Writing in Newsweek on 31 May, Ndileka Mandela argues that since her grandfather Nelson Mandela used moral leadership to end apartheid, this argument should apply in the case of solving the conflict in Ukraine.

We have no argument with that. Moral authority is key to understanding the Ukrainian war and bringing it to a rapid close. This is not the only necessary component, of course, since building peace in South Africa involved a united international community pushing both parties, her grandfather’s African National Congress (ANC) and the then governing National Party, to the negotiating table employing different carrots and sticks.

It also fundamentally required both parties to realise that there was more to be gained by ending conflict than from continuing with it. And it demanded a clear methodology, with leadership skilled in the tactical negotiating art. As the then State President FW de Klerk recalled shortly before his death in November last year, Nelson Mandela was especially adroit in strengthening his adversary to be able to assist in delivering a deal.

Mandela also veers on to extraordinary ground in creating an ethical equivalence between Russia and Ukraine. She writes that Ukrainian President Volodymyr Zelensky’s moral authority is in danger of being undermined on account of the treatment of African students at the Ukrainian border and that these actions have, somehow, endangered peace.

There is no case for the moral ambiguity that she attempts to introduce into the debate. Just as apartheid ended because it was morally and ethically unacceptable to most South Africans, black and white, the war in Ukraine is a struggle between what is good and bad, right and wrong. It is a result of Russia’s invasion in its brazen overturning of international law and attempt to capture and occupy Ukraine for its own purposes.

There is consent among democratic nations that Russia instigated, organised and conducted the invasion on spurious grounds. Even South Africa said so before the political commissars reminded the Department of International Relations that the ruling party’s largest funder was a Russian oligarch.

The problem for a peace process is not the isolated treatment of African students in Ukraine, however unacceptable that was in the midst of the chaos of evacuations. It is, moreover, forgotten in this argument that there were more than 9,000 African university students studying in Ukraine before the war, an illustration of solidarity, not racism.

This is, at best, grasping at straws, at worst, an attempt to trivialise a war by exaggerating the hardships experienced by students – who were, by the way, part of a large wave of refugees of all races and many nationalities struggling to get out of Ukraine.

This must not obscure the fundamental issue, which is that Russia broke international law.

And yet there is little pressure from Africa and others, including, notably, India and China, in urging Russia to the negotiating table. There has been no willingness on the part of Russia’s leadership to leave Ukrainian territory. Although Zelensky has regularly called for talks, Russian President Vladimir Putin apparently believes that there is more to be gained by continuing to fight than suing for peace.

The invasion of 2022 teaches, if nothing else, that Putin viewed the outcome of the 2014 appropriation of Crimea and parts of the Donbas as a temporary appeasement. Rational analysis suggests he won’t stop now in his attempt to remake Russia’s empire; indeed, if anything, history teaches that this view is wishful thinking.

There is currently no peace process because Putin’s Russia has no appetite for peace.

Even though Mandela approaches the need to build common ground from an academic perspective, this is not an abstract issue for Africans, not least because of the continent’s experience of colonisation by a foreign power.

Mandela posits that the Ukraine war, just like apartheid, could be resolved by moral suasion and moral authority. Just like apartheid, the Russian invasion of Ukraine goes beyond morality. Both represent an abominable contravention of international law, human rights, sovereignty and the rule of law. Both also require much more than moral rectitude.

To moralise Russia’s invasion of Ukraine is thus to mitigate and minimise Russia’s culpability.

Russia’s invasion raises many other problems for Africa. If Russia were to get away with this invasion, free from condemnation and able to hang on to the territory it has seized, what does this mean for democracy in Africa, the principle of sovereignty, the sanctity of borders, and human rights and basic freedoms? Does this mean that, in the future, might is right in changing boundaries and political regimes?

And there are the increasing real costs for Africans, given the increase in the price of food and fertiliser that has resulted from the closure of Ukrainian ports.

Given Africa’s colonial history, claims of territory on ethnic and linguistic grounds could result in an endless continent-wide conflagration. There is also the issue of empire: Africans should be wary of the signals they are sending out to those elsewhere on the acceptance of intra-European colonialism.

Putting pressure on a democratically elected president to accept Russian occupation as a precondition for peace demonstrates moral ambivalence. While this view might tempt authoritarians, this cannot be in the interests of African people.