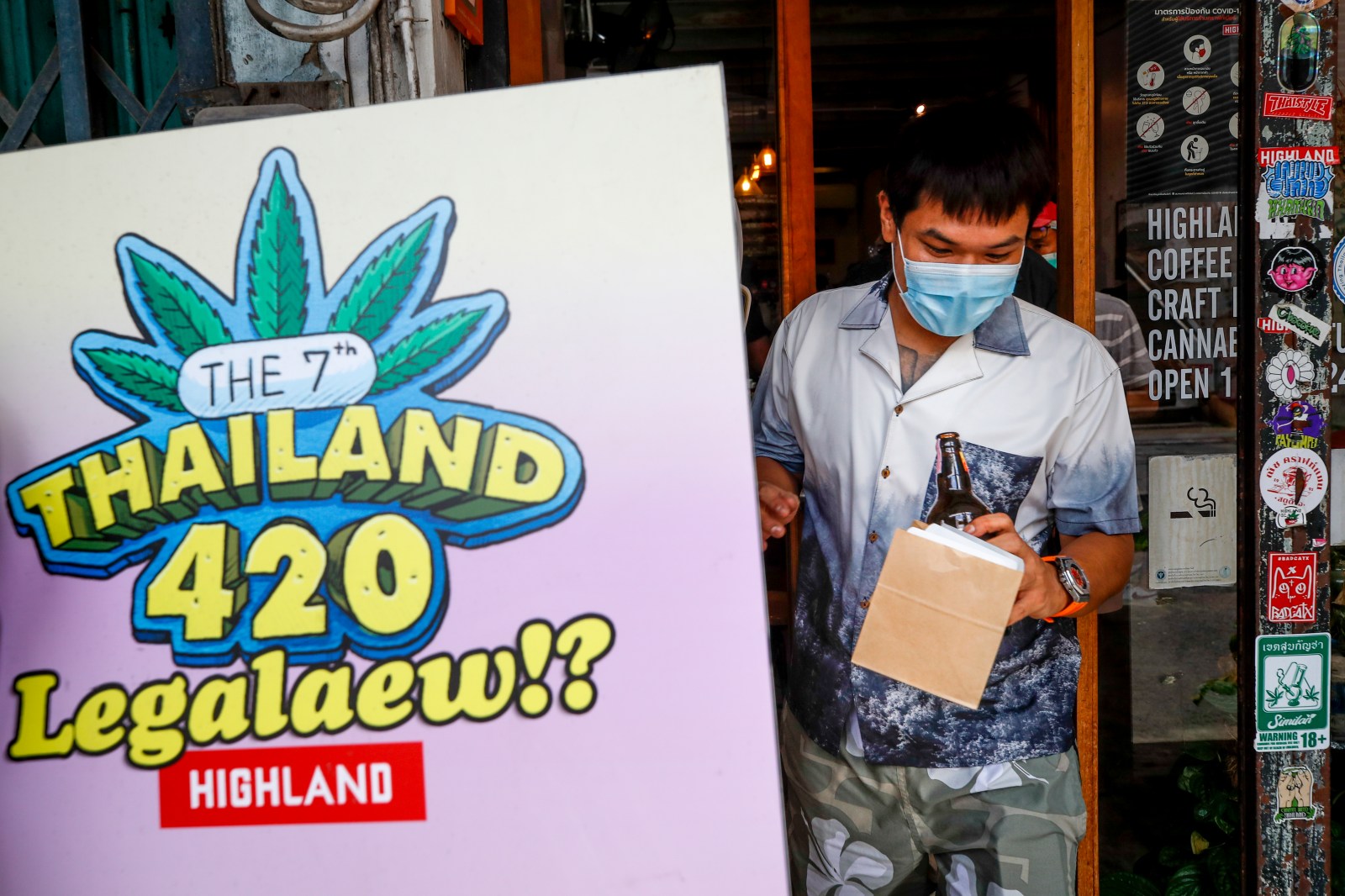 A customer exits a cannabis cafe in Bangkok, Thailand, 09 June 2022. As the first country in Asia, Thailand on 09 June has moved to decriminalize cannabis as well as allowing the possession and growing of cannabis plants at home for self-consumption. Under the new law, which also removes cannabis from the country's narcotics list, families can grow up to 6 plants in their homes, however the government has warned people not to think this means they can smoke marijuana in public and cause a nuisance to others, as this is still not permitted. EPA-EFE/DIEGO AZUBEL

BANGKOK, June 9 (Reuters) - Thailand legalised the growing of marijuana and its consumption in food and drinks on Thursday, the first Asian country to do so, with the aim of boosting its agriculture and tourism sectors but smoking pot is still against the law.

Shoppers queued up at outlets selling cannabis-infused drinks, sweets and other items as advocates of the plant welcomed the reform in a country that has long had a reputation for strict anti-drug laws.

Among those at the front of the queue at one Bangkok shop was Rittipong Dachkul, 24, waiting since Wednesday evening to buy his first ever legal marijuana.

“I took a bus here after I got off work,” Rittipong told Reuters.

“We’re now able to find it easily, we don’t have to worry about the source, but I have no idea about the quality,” he said, referring to the strength of the products on offer.

Thailand, which has a tradition of using cannabis to relieve pain and fatigue, legalised medicinal marijuana in 2018.

The government, banking on the plant as a cash crop, plans to give away a million plants to encourage farmers to take up its cultivation.

“After COVID, the economy going down the drain, we really do need this,” said Chokwan Kitty Chopaka, who owns a shop selling cannabis gum sweets.

But authorities aim to head off an explosion of recreational use by limiting the strength of the products on offer.

The possession and sale of cannabis extracts containing more than 0.2% of its psychoactive ingredient, tetrahydrocannabinol (THC), is not allowed, which will mean smokers of the drug known as “pot”, “weed” and a host of other names, will struggle to get “stoned”.

“Buds with 0.2% THC is considered low, so you would need to consume a lot to get high,” said Suphamet Hetrakul, co-founder of the Teera Group, which grows cannabis for medical use. THC is concentrated in the plant’s flowers, or buds.

Those who break the law can still face jail and fines.

Cannabis growers have to register on a government app called PlookGanja, or grow ganja, another nickname for the spikey-leafed plant. Nearly 100,000 people have signed up to the app, said health ministry official Paisan Dankhum.

Suphamet said he was concerned about quality control among the many new cultivators.

“It will be hard to control the level of THC and other contaminants in their products and that could be dangerous for consumers,” Suphamet said.

The health ministry said it has approved 1,181 products including cosmetics and food, containing cannabis extracts and it expects that the industry will earn as much as 15 billion baht ($435.16 million) by 2026.

Big business is jumping in.