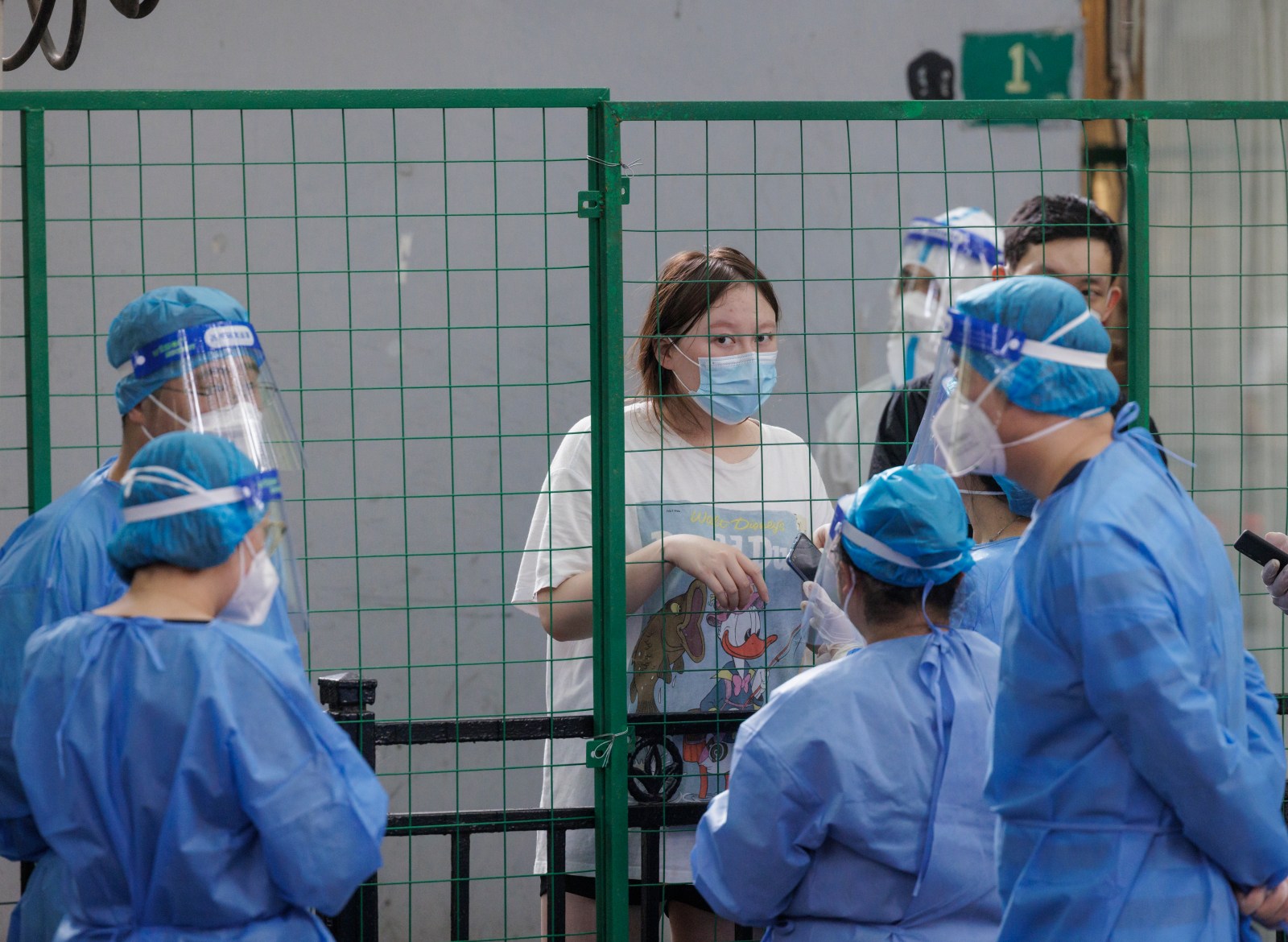 A woman stands behind quarantine fence during the protest, amid new round of Covid-19 lockdowns, in Shanghai, China, 06 June 2022. EPA-EFE/ALEX PLAVEVSKI

Both cities had eased widespread Covid-19 curbs recently after a decline in new cases. However, the country has stuck with a “dynamic zero-Covid” policy aimed at shutting down transmission chains as soon as possible.

The sprawling Minhang district in Shanghai, home to more than 2 million people, said on Thursday it will conduct nucleic acid tests for all residents on June 11 and ordered residents to stay home during the period.

Several other street-level government authorities in other districts of the city have also issued notices saying residents will be subject to two days of confinement and another 12 days of rigorous testing starting from Thursday.

According to notices issued for at least three neighbourhoods, residents must stay indoors until Saturday, and complete five rounds of compulsory tests ending on June 23.

Many of these were in the central district of Xuhui, where green fences and red wooden boards have sprung up over the past week, barricading residents in and triggering fresh public anger.

A Shanghai government media outlet The Paper said one of the Xuhui outbreaks was traced to a well known beauty parlour, the Red Rose, in the city centre which reopened on June 1 when the city-wide lockdown was eased.

Three workers there had tested positive for Covid-19, it said on Thursday. The shop had received 502 customers from 15 out of the city’s 16 districts in the past eight days, it said.

“When is this ever going to end?,” commented one Weibo user on a media report on the Red Rose. “I just want to have a normal life.”

While China’s infection rate appears very low compared with many other countries, which have now opted to live with the virus, the government has doubled down on its zero-Covid policy to protect its elderly and its medical system, and has warned that it will not tolerate any comments or actions that doubted or repudiated the policy.

China reported 240 new coronavirus cases on June 8, of which 70 were symptomatic and 170 were asymptomatic, the National Health Commission said on Thursday.

Authorities in Chaoyang, a Beijing district of more than 3 million people, ordered entertainment venues and internet cafes to shut on Thursday, and patrons of four specific bars were told to identify themselves and self-isolate.

Shanghai’s two-month lockdown, the shuttering of many malls and venues across Beijing as well as movement curbs imposed in many other Chinese cities in recent months have heavily battered the Chinese economy, disrupted supply chains and slowed international trade.

Authorities have been keen to revive business and started to relax some curbs in May which helped China’s exports that month to grow at a double-digit pace, beating expectations.

In Shanghai, China’s most cosmopolitan and its biggest business hub, officials have also been trying to mend ties with foreign firms by holding multiple meetings with executives and easing a key border requirement for overseas workers.

The Shanghai Disney Resort DIS.N, which has been shut since March 21, said it will reopen some retail and park areas from Friday but the main Disneyland park, Disneytown and its two resort hotels will remain closed until further notice.

“This unpredictability, and increased risk, is resulting in many businesses delaying, reducing or withdrawing entirely from the Chinese market,” said Alexandra Hirst, senior policy analyst with the British Chamber of Commerce in China.

By David Stanway and Ryan Woo

(Reporting by David Stanway in Shanghai and Ryan Woo in Beijing; Additional reporting by Martin Pollard in Beijing and Brenda Goh in Shanghai; Editing by Stephen Coates & Simon Cameron-Moore)