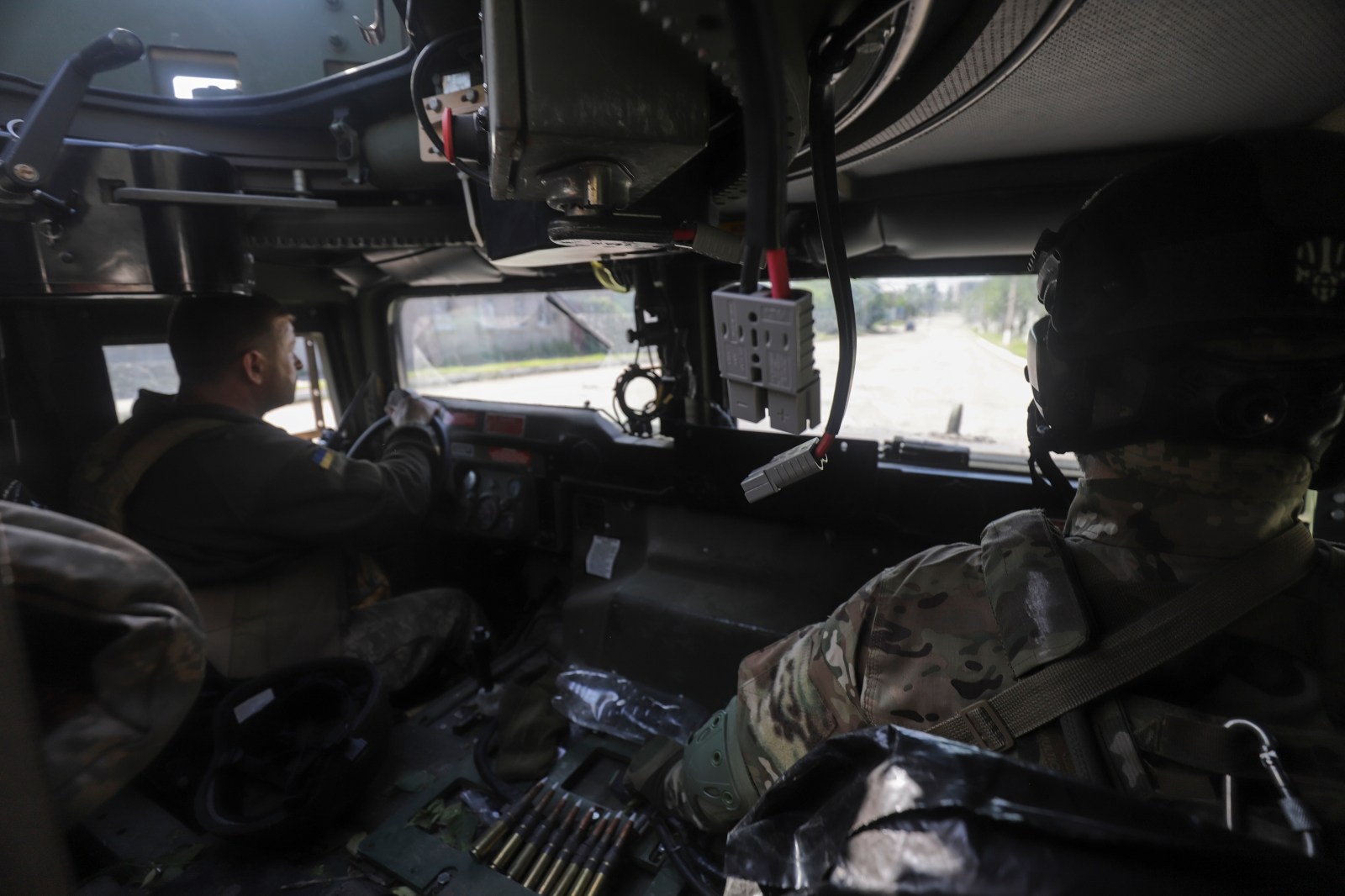 Ukrainian servicemen patrol territory in an APC near the front line in the city of Severodonetsk, Luhansk region, Ukraine, 02 June 2022. EPA-EFE/STR

KYIV/DRUZHKIVKA, Ukraine, June 7 (Reuters) - Ukrainian troops battled Russians street-to-street in the ruins of Sievierodonetsk on Tuesday, trying to hold onto gains from a surprise counter-offensive that had reversed momentum in one of the bloodiest land battles of the war.

The fight for the small industrial city has emerged as a pivotal battle in eastern Ukraine, with Russia focusing its offensive might there in the hope of achieving one of its stated war aims – to fully capture surrounding Luhansk province on behalf of separatist proxies.

After withdrawing from nearly all the city in the face of the Russian advance, Ukrainian forces staged a surprise counter-attack last week, driving the Russians from a swath of the city centre. Since then, the two armies have faced off across boulevards, both claiming to have inflicted huge casualties.

“Our heroes are not giving up positions in Sievierodonetsk,” President Volodymyr Zelenskiy said in an overnight video address, describing fierce street fighting in the city. Earlier, he told reporters at a briefing the Ukrainians were outnumbered but still had “every chance” of fighting back.

The city’s mayor, Oleksandr Stryuk, told Ukrainian television on Tuesday Ukrainian forces were doing all they could to hold their ground: “Our armed forces have strengthened their positions and are holding the line.”

Before Ukraine’s counter-offensive, Russia had seemed on the verge of encircling Ukraine’s garrison in Luhansk province, attempting to cut off the main road to Sievierodonetsk and its twin city Lysychansk across the Siverskiy Donets river.

But following the counter-offensive, Zelenskiy made a surprise visit to Lysychansk on Sunday, personally demonstrating that Kyiv still had an open route to its troops’ redoubt.

Ukraine’s defence ministry said Russia was throwing troops and equipment into its drive to capture Sievierodonetsk. Luhansk Governor Serhiy Gaidai said on Monday the situation had worsened since the Ukrainian defenders had pushed back the Russians over the weekend.

Luhansk and neighbouring Donetsk province, together known as the Donbas, have become Russia’s main focus since its forces were defeated at the outskirts of Kyiv in March and pushed back from the second biggest city Kharkiv last month.

In its nightly update, the Ukrainian military said two civilians were killed in Russian shelling in the Donbas and Russian forces had fired at more than 20 communities, using artillery and air strikes.

In Druzhkivka, in the Ukrainian-held pocket of Donetsk province, residents were picking through the wreckage of houses obliterated by the latest shelling.

“Please help, we need materials for the roof, for the house, there are people without shelter,” shouted Nelya, outside her home where the roof had been shredded. “My niece, she has two small children, she had to cover one of her children with her own body.”

Nearby, Nadezhda picked up a children’s pink photo album and kindergarten exercise book from the ruins of her house, and put them on a shelf somehow still standing in the rubble.

“I do not even know where to start. I am standing here looking but I have no idea what to do. I start crying, I calm down, then I cry again.”

Russia invaded Ukraine on Feb. 24, in what it calls a “special military operation” to stamp out what it sees as threats to its security. Ukraine and its Western allies call this a baseless pretext for a war to grab territory.

Britain’s defence ministry said on Tuesday that Russia was still trying to cut off Sievierodonetsk by advancing from the north near Izium and from the south near Popasna. It said Russia’s progress from Popasna had stalled over the last week, while reports of shelling near Izium suggested Moscow was preparing a new offensive there.

“Russia will almost certainly need to achieve a breakthrough on at least one of these axes to translate tactical gains to operational level success and progress towards its political objective of controlling all of Donetsk Oblast,” it said.

The Donetsk regional governor, Pavlo Kyrylenko, told Ukrainian television there was constant shelling along the front line, with Russia attempting to push towards Sloviansk and Kramatorsk, the two biggest Ukrainian-held cities in Donetsk.

Kyrylenko said efforts were underway to evacuate people from towns, some under attack day and night, including Sloviansk where about 24,000 residents remain, around a quarter of the population.

“People are now understanding, though it is late, that it is time to leave,” he said.

Russia’s Defence Minister Sergei Shoigu said the Russian-occupied Ukrainian ports of Berdyansk and Mariupol were ready to resume grain exports. Ukraine says any such shipments organised from territory seized by Moscow would amount to illegal looting.

The Kremlin said that for exports to resume from Ukrainian-held ports, Kyiv must first clear them of mines. Russia could then inspect and escort ships to international waters, Kremlin spokesperson Dmitry Peskov said.

By Pavel Polityuk and Abdelaziz Boumzar

(Reporting by Reuters; Writing by Peter GraffEditing by Gareth Jones)