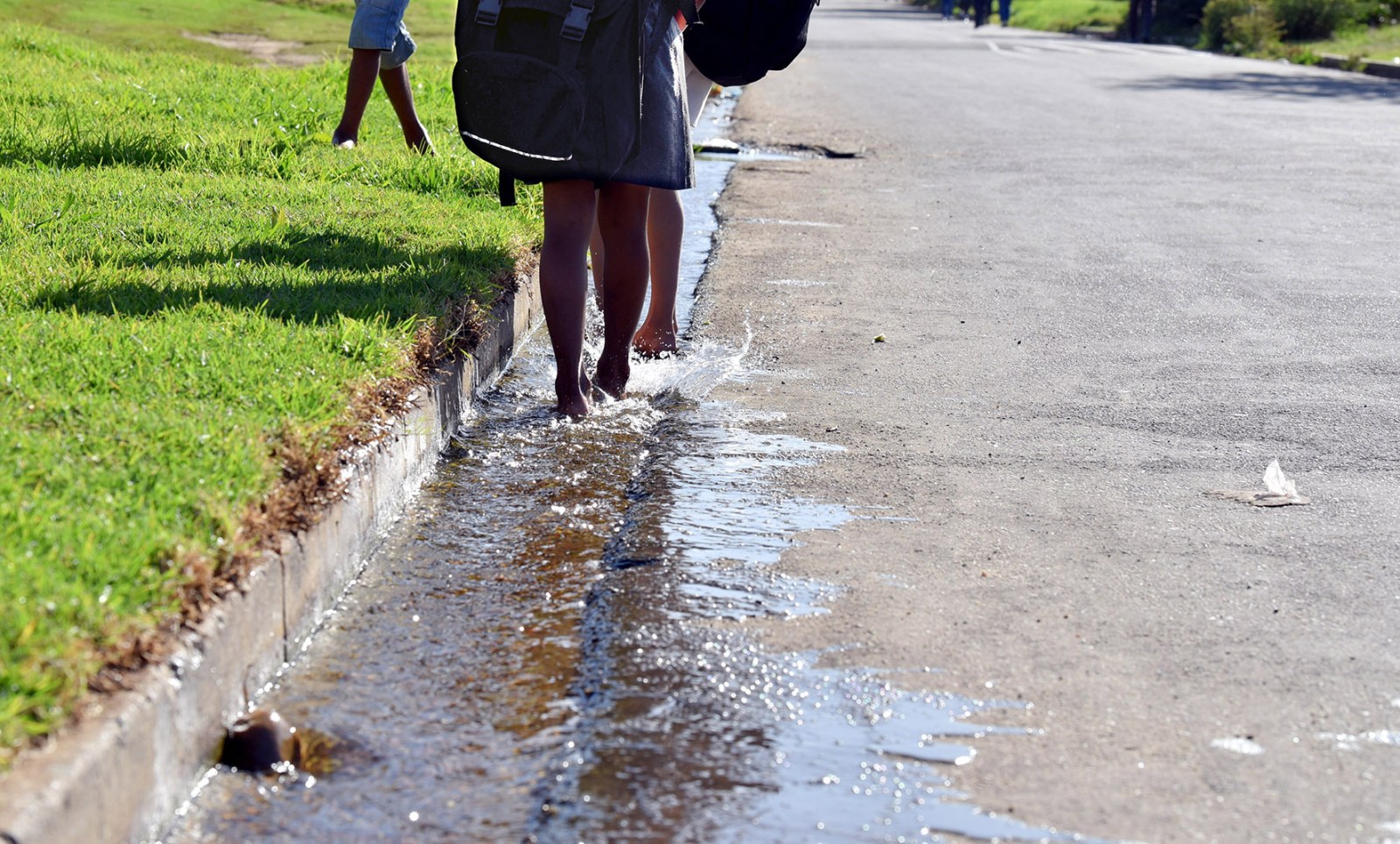 A water crisis has been plaguing Nelson Mandela Bay Metro in the Eastern Cape. Taps are on the brink of running dry. Above, water from a leak runs down Martin Street, Gelvandale. (Photo: Deon Ferreira)

With millions of litres of fresh, clean water going to waste through leaking pipes in Nelson Mandela Bay — something the Minister of Water and Sanitation, Senzo Mchunu, calls ‘a sickness’ — the Nelson Mandela Bay Business Chamber has offered to help trace and repair thousands of leaks in a metro that is staring down the barrel of Day Zero.

The Nelson Mandela Bay Business Chamber has offered to help fix the thousands of leaks in a metro that is two weeks away from 40% of the city’s taps running dry when extraction from the first supply dam stops.

The Minister of Water and Sanitation, Senzo Mchunu, has described the widespread leaks in the city as “a sickness” — the water services in the metro have now been taken over by the national department in terms of the Water Services Act.

The Amatola Water Board has also been appointed as an implementing agent to sort out the mess in the hope of preventing almost half the city’s water supply from drying up in two weeks’ time.

In Gelvandale, Gqeberha, countless litres of clean water have been running down Martin Street since 2018.

“We got tired of phoning,” resident Kathleen van Rensburg said.

“You phone and phone. When it is election time, people promise that it will be fixed. There were people here… they even left their tools here, but nothing gets done. I am tired of reporting this.

“We have been in the newspapers before… It is clean, clean water. And it runs down the street every day into the drains.

“When Day Zero comes, I am going to pump that water to my washing machine. The last time I tried to report it was about six months ago. Nobody even answered the phone.”

It was revealed at last week’s Joint Operations Committee meeting that due to staffing and IT problems, the metro’s call centre was dropping thousands of calls a month — and the average turnaround time to fix a leak in Nelson Mandela Bay was 10 days.

Van Rensburg said: “We have to cut the grass every week otherwise it looks like a jungle. At night we listen to the frogs before we go to sleep. I don’t know where all that water comes from.

“Just this afternoon, there was a whole truck full of people here. I showed them all the water. They promised to report it. Now we are holding our thumbs and our toes that it will happen.”

On Friday, councillors were briefed by members of a technical team from the Ministry of Water and Sanitation who said that 30% of the city’s water was lost to leaks and that it was possible for Nelson Mandela Bay to have water for everyone if no more than 230 million litres were used each day. This allows for 150 litres of water per person per day.

“What we are currently experiencing is a water management crisis. While we acknowledge that the lack of rain and resultant low dam levels have been one of the factors contributing to the water crisis, there are a number of other issues…

“A lack of accountability and urgency from municipal leadership in dealing with water issues, budget and procurement bottlenecks, lack of investment and maintenance of infrastructure, qualified engineers no longer being employed… and non-revenue water losses amounting to 40% of total supply, of which 29% comprises leaks and 11% commercial losses.

“It is vital that all the stakeholders pull together to prevent the metro from running out of water,” said Van Huyssteen.

“As a business community, we have members who are prepared to volunteer their expertise and resources to assist with targeting the reduction in leak levels.

“It is important that a two pronged approach is adopted… The first must centre around reducing water consumption levels and the severity of leaks.

“The second approach must be of a more medium to long-term nature where infrastructure weaknesses and shortcomings are addressed.

“This potentially includes replacing the main water pipes where the most leaks are concentrated, upgrading critical Orange River/Fish River/Sundays River scheme infrastructure which was built in the 1970s, and implementing long-term measures which recognise that we live in a water-scarce area.

“A concentrated approach to dealing with the lowest-hanging fruit should be prioritised, such as reducing in-building wastage, addressing leaks and limiting water usage at municipal buildings and facilities, accelerating the adoption of rainwater and stormwater harvesting among businesses and households and, very importantly, dealing with inaccuracies in the water billing system,” said Van Huyssteen.

“Additionally, on-site treatment and reuse of wastewater and greywater, particularly for industrial users, can be implemented in less than a month and can make a huge impact.

“There are approximately 150 million litres per day running through the municipal sewer works and this wastewater is an asset, but it is sent to the municipality for treatment and then is dumped into the sea.

“This could be a key measure in replacing a large quantity of the municipal water utilised every day.

“Through the Chamber’s Adopt-A-School initiative, businesses to date have adopted 46 schools and clinics, with efforts focused on fixing leaks and implementing water-saving and water-harvesting measures,” Van Huyssteen said.

The metro sent out an alert to residents at the weekend requesting them not to fill water tanks with municipal water as this would make matters worse.

Luvuyo Bangazi from the Mandela Bay Development Agency, helping with crisis communication on the water issue, said the weather forecast did not look promising for heavy rains in the immediate future.

A new dashboard was launched for the public to access online ways to report leaks and monitor the situation.

Following Mchunu’s visit, the Amatola Water Board was appointed by the minister as an implementing agent. They were instructed to present him with a plan on Wednesday.

Answering questions in the Eastern Cape legislature, provincial premier Oscar Mabuyane said Phase 3 of the Nooitgedacht scheme — which brings water from the Gariep Dam in the Free State to Nelson Mandela Bay — will be completed by August this year.

An additional pump station and a number of boreholes that will produce an additional 17 to 18 million litres a day will be completed by next month.

Mabuyane said the Nooitgedacht project was delayed due to “contractual” reasons, while the borehole projects were delayed due to “budget approval and construction disruptions”.

In addition, construction on the Coega Kop water treatment works was delayed due to legal action over the tender. DM/MC