Mosimane snaps at Motsepe over having to play the final... 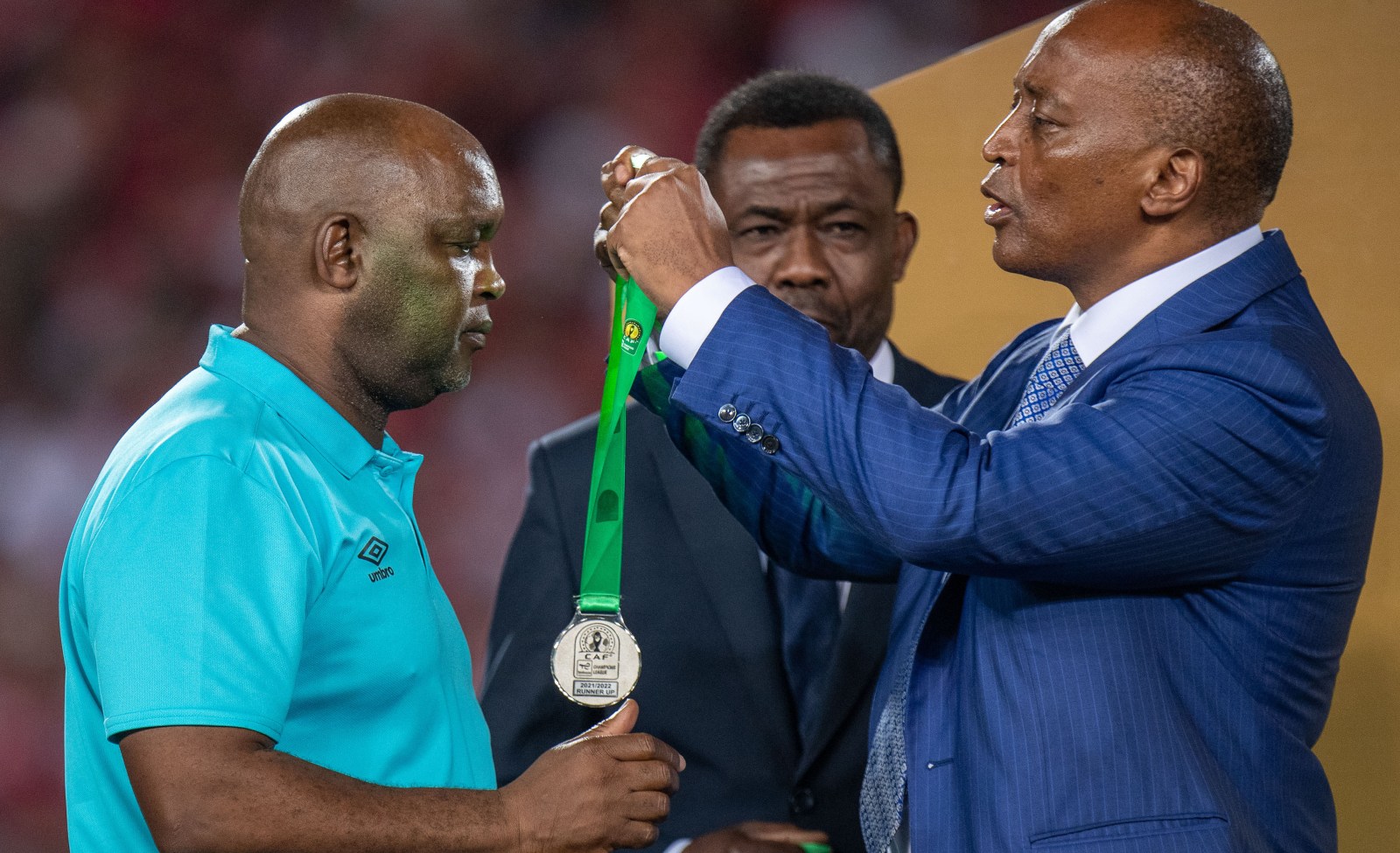 Manager Pitso Mosimane of Al Ahly and President of the Confederation of African Football Patrice Motsepe during the CAF Champions League Final 2022 match between Al Ahly and Wydad AC at Stade Mohammed V on May 30, 2022 in Casablanca, Morocco. (Photo by Sebastian Frej/MB Media/Getty Images)

Al Ahly manager Pitso Mosimane was predictably angry after his side lost the African Champions League final 2-0 at the home stadium of opponents Wydad Casablanca.

The first thing Mosimane did after receiving his runners-up medal at the match on Monday, 30 May, was to whip it off and hand it to a volunteer who had been marshalling the photographers.

But that was not before he had had a barbed exchange with his former employer, Patrice Motsepe.

The two were tight when Mosimane steered Mamelodi Sundowns to a golden era of dominance in South Africa’s domestic game. But the relationship with Sundowns’ billionaire owner Motsepe soured after an acrimonious falling-out over the manager departing for Egyptian giants Al Ahly.

These days animosity is barely concealed.

“So, this is what you wanted,” Mosimane said to Motsepe, who nowadays wears the hat of Confederation of African Football (CAF) president, as he led the procession of his players to collect their runners-up medals in Casablanca.

A feeling of ‘injustice’

Motsepe’s mood darkened on the stage after this exchange. Gone was the smile and he appeared to be reflecting on what had been said, going through the motions of handing over medals.

Mosimane does not take losses well and had complained long and hard before the game about the “injustice” of having to play a supposedly “neutral” final in the Moroccan city against home side Wydad Casablanca.

The choice of Casablanca to host the one-off final was clouded in Machiavellian deceit and provided another example of African football shooting itself in the foot without provocation.

This was the third Champions League final intended to be decided at a neutral venue, after CAF changed from the tried-and-tested format of two legs, home and away, in a bid to replicate the success of the European equivalent.

But the contrast with Europe in terms of fan travel and resources is stark, and bidding by African cities to host the final has not proven plentiful – especially when compared with the wide array of options that Europe’s football controlling body has available annually.

While Uefa decides on venues for its European club competition finals well in advance, CAF left the decision of where to host its 2022 final until the Champions League was already at the semifinal stage – just three weeks before the final. By then, it was already clear that Al Ahly and Wydad would contest the deciding match.

CAF claimed Morocco were the only football association to bid for the match after Senegal withdrew.

But the truth is Casablanca and Dakar were both on the table.

A vote by the CAF executive committee gave it to Morocco despite the fact there were two Casablanca teams in the Champions League and none from Senegal – making Dakar the perfect neutral venue.

Predictably, the Egyptians were up in arms about having to play the final in Wydad’s backyard and quickly took the matter to the Swiss-based Court of Arbitration for Sport but had their appeal dismissed.

“I suppose the powerful got what they wanted in the end,” said a bitter and sarcastic Mosimane after his side’s 2-0 loss – in a reference to Morocco’s considerable sway in the African game. That country’s federation president Fouzi Lekjaa remains a smart operator behind the scenes.

With defeat went the chance, for now, for Mosimane to write himself into the record books and join the fabled Portuguese coach Manuel Jose (Al Ahly 2001-2008) as the only coaches to win four Champions League titles.

Jose is like a deity in Egypt and Mosimane is fast getting there, overcoming the prejudice of being a black African coach. He is clearly a fan favourite and knows how to work the crowd. Winning the Champions League with Al Ahly in 2020 and 2021, on top of his success with Sundowns in 2016, helped to prove his worth.

But Monday’s loss will not sit well with the Egyptians either, no matter how well their side played and despite having to face a formidably hostile cauldron. The barracking of the Al Ahly players by Wydad supporters reached ear-tingling decibel levels in an atmosphere rarely replicated in any sporting arena, yet they dominated possession and had chances in the match.

“Wydad took their chances and scored. That’s football. What else can I say,” Mosimane said at the post-match briefing.

“We had our chances. Percy [Tau] was one-on-one with the goalkeeper and, had he scored, it could have been different. But what I’m happy about is we came here and played football.

“It wasn’t a neutral venue, it wasn’t 50-50 supporters, everyone who was behind the decision [to play in Casablanca] must now be satisfied. We’ll just have to move on.”

It has been a long and draining season for Al Ahly, with multiple club commitments and most of the squad also playing for the national team. But they remain combative, none more so than Mosimane.

The chances that he will be back on this stage are great. DM168