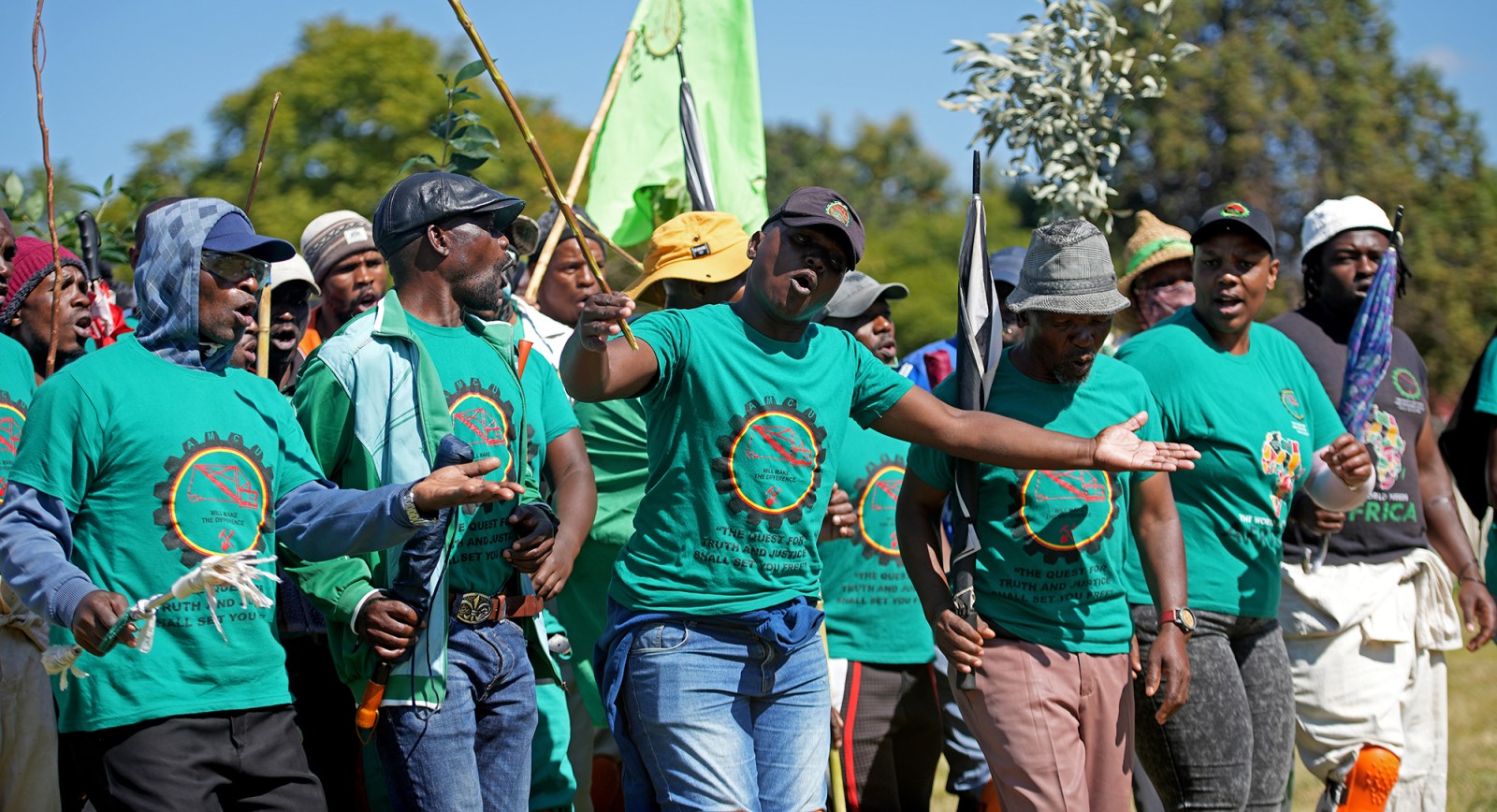 Sibanye-Stillwater employees affiliated to Armcu and the NUM protest at the mine's stadium on 9 May 2022 in Driefontein, South Africa. (Photo: Gallo Images / City Press / Tebogo Letsie)

The strike at Sibanye-Stillwater’s gold operations looks set to end after NUM and Amcu members agreed to accept the company's offer.

After almost three months, the strike at Sibanye-Stillwater’s gold operations looks set to end after a mass meeting of NUM and Amcu members on Friday gave the thumbs-up to a three-year wage proposal made by the Commission for Conciliation, Mediation and Arbitration (CCMA) to the parties.

Focus will now turn to wage talks at Sibanye’s platinum group metals (PGM) mines and the rise of Numco – or is it Numcu?

The upshot is that the leaders of the National Union of Mineworkers and the Association of Mineworkers and Construction Union (Amcu) were given a mandate from their members to accept the offer. It’s not quite what they were aiming for and it will take a long time to compensate for almost three months’ worth of lost wages.

It’s hard to see either side taking a victory lap and the losers will include the wider South African economy, which has lost some precious metals export revenue from the strike.

The main sticking point from the start was a demand for wage hikes of R1,000 a month each year over the course of three years for the lowest category of workers – a deal that would have mirrored the one reached with Harmony Gold last year.

There may be some adjustments to the higher pay grades depending on the consumer price index (CPI), which is currently running at 5.9% and expected to accelerate in coming months as fuel and food prices surge.

Inflationary pressures have been a clear driving force in wage talks more broadly in South Africa, a trend which can create its own cycle: wage demands and settlements exceed inflation and in turn add fuel to the inflationary embers.

The agreement is expected to be formally concluded early this week, bringing an end to a strike in the mining sector which among other things has been notable for its lack of violence. The previous strike at Sibanye’s gold mines – which lasted five months and ended in April 2019 – was carried out by Amcu alone after it refused to sign up to the agreement inked by rival unions. Nine people were killed in violence linked to the strike and more than 60 houses of NUM supporters were reportedly torched during that industrial action.

Amcu, in the end, had to sign up to the same deal its rivals had accepted after its members lost five months of wages and benefits in a pointless strike. That no doubt helps to explain why the union has since mended fences with its former arch-rival, NUM. And this mending of fences in turn explains why this strike did not trigger another wave of violence.

It goes without saying that this is a good thing – people are not getting killed or beaten. And it is one less security headache for an industry that faces violence on a range of other fronts including procurement mafias, armed robberies and incursions by illegal miners.

“Why should we fight when our enemy is the same? There is unity of NUM and Amcu members at the shop floor,” NUM spokesman Livhuwani Mammburu told Business Maverick.

There does not seem to be a formal NUM/Amcu tie up in the making, though the leaders of both unions have referred to Numco – or is it Numcu? And Amcu’s leader and founder Joseph Mathunjwa has a new, fetching shirt with the NUM and Amcu logos emblazoned on it.

Amcu was a break-away from NUM – sort of like the EFF is a breakaway from the ANC – and after years of enmity, this is significant.

Centre stage will now be occupied by PGM wage talks between Sibanye and the informal entity known as Numcu (Numco?). A template has been set by Anglo American Platinum (Amplats), which has signed a five-year wage deal with hikes that are basically north of 7%.

But both unions have a special dislike for Sibanye CEO Neal Froneman, whose mostly share-based R300-million remuneration package – in the wake of record profits, it must be said – has given labour a massive target. Mathunjwa in an interview on eNCA at the weekend referred to Froneman as a “wounded soul”.

When wage talks get personal, an agreement is bound to be more elusive. DM/BM