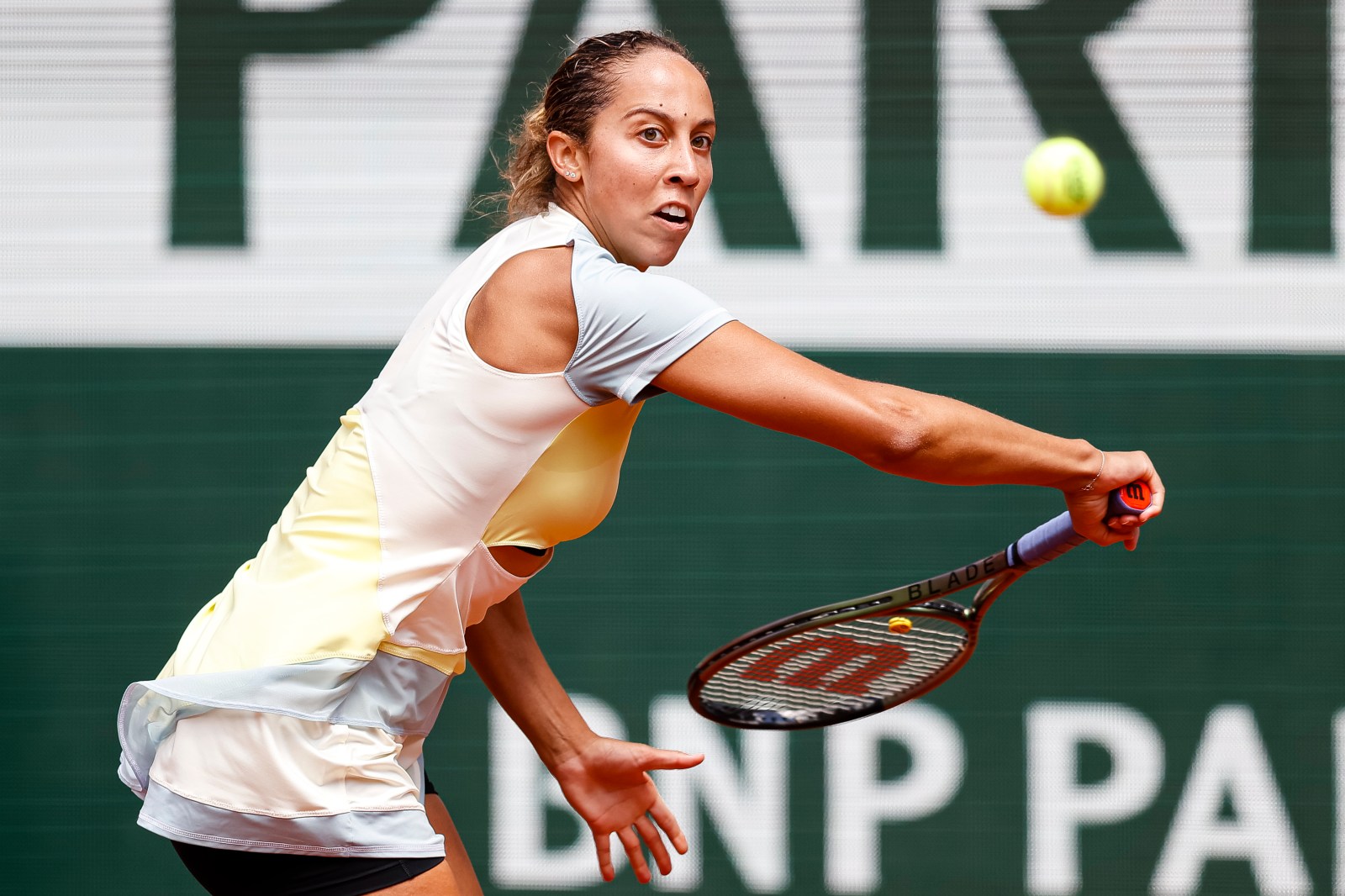 Madison Keys of United States in action against Veronika Kudermetova during the Women's Singles Fourth-Round match on Day 9 of the 2022 French Open at Roland Garros on 30 May 2022 in Paris, France. (Photo: Antonio Borga / Eurasia Sport Images / Getty Images)

The whole point of the design is to show more flesh. Right?

A smallanyana fly spy was hanging out on a luridly painted wall in a meeting room at the Nike US headquarters where a “brainstorming” session was happening ahead of the French Open.

The sportswear designers were talking about the women’s outfits for the upcoming Grand Slam. They were joined by Adidas and New Balance towards the end of their meeting, which, according to our trusty insect reporter, was a race to the bottom.

Very Important Designer No1 (VIDN1): I don’t see why we can’t just make them play in their undies. The dresses, skirts, skorts and whatever get shorter and more revealing every year, so why not do what we’ve always wanted to do?

Very Important Designer No2 (VIDN2): We did that a couple of years ago. I think it was at Wimbledon. Can’t remember. We designed a dress that was more like a negligee and feminists were up in arms. Not legs though, because they don’t shave those.

VIDN1: Who cares about the feminists? We’ll just call them “woke” on social media and then a million right-wing trolls will threaten to kill them and they’ll shut up.

VIDN2: Good point, bro. Gotta love social media, hey? And with Elon taking over Twitter, that’ll be the end of all those bunny-hugging, ridiculously kind and decent sorts – what are they called again?

VIDN2: That’s it! F*ck those leftist bastards and feminists for trying to make this world a better place and for ruining women’s fashion. Also, have you seen how short the ballgirls’ skorts are? I mean, if the Grand Slams are objectifying kids and won’t allow the ballgirls to wear shorts, why can’t we objectify the adult women, am I right?

VIDN1: Exactly! Now, let’s design some tennis underwear, er, I mean women’s sportswear. I want a big hole under the right boob of that top on your screen. We need to see more flesh.

VIDN1: Of course not. Let’s put two more holes on the back.

VIDN2: Gotcha. What about the sleeves? Do they really need two?

VIDN1: Nope. Perfect, bro! That’ll look very chic – get rid of one of the sleeves.

VIDN1: Goes without saying. We make it shorter every year, so shave off 5cm and make one side shorter than the other.

VIDN2: That’s brilliant, bro! Let’s get ahold of the boys to see what they are designing this year.

VIDN1: We’re just calling to let you know that you lost again.

Adidas VID: Don’t be so cocksure.

New Balance VID: Just show us what you’ve designed and I will once again prove that we’ve designed the sauciest outfit for the women this year.

VIDN2: *Chuckles* Puts a sketch on his shared screen. Not only is the skirt/skort the shortest it’s ever been, we have a hole under the right boob, two holes on the back and only one sleeve! Beat that, suckers!

Adidas VID: Amateurs! Our skirt is the same length as yours, but we’ve done something exceptional with our vest this year. We’ve brought the straps in, closer to the neck, so you can see some boob flesh. Also, with the straps designed in this way, they can’t wear proper sports bras, which means more bouncing boobs. I win!

New Balance VID: Bros, our skirt this year is just a transparent piece of frilly material so you have full view of the short tights they’re forced to wear under those pointless skirts and all you see are shapely bums!

A woman enters the meeting room.

Woman: Is this the design meeting for the French Open women’s range?

Woman: I’m part of the design team; why wasn’t I invited?

VIDN1: We thought we’d just get on with it and not trouble you.

VIDN2: Look, all you ever do is say stuff that really kills our creative spirit.

VIDN1: Yeah. The last time you suggested we ask female tennis players what they would like to wear, and then you suggested something so … so … radical, it was ridiculous! You said we should let them wear what they wear when they’re training – knee-length tights and T-shirts or the same shorts as the men, so that’s why we left you out.

VIDN2: Exactly! You also wanted to know why the women’s outfits always have to be so fashionable when the men just wear the same shorts and T-shirts in different colours every year. And you wanted to give the women shorts with pockets, for Christ’s sake! What are they gonna do with pockets?

VIDN1: Sorry about that, guys. Damn women always want to be included. Anyway, adios amigos, we’ll settle this contest when we see you at the Whisper Club in Paris. DM168