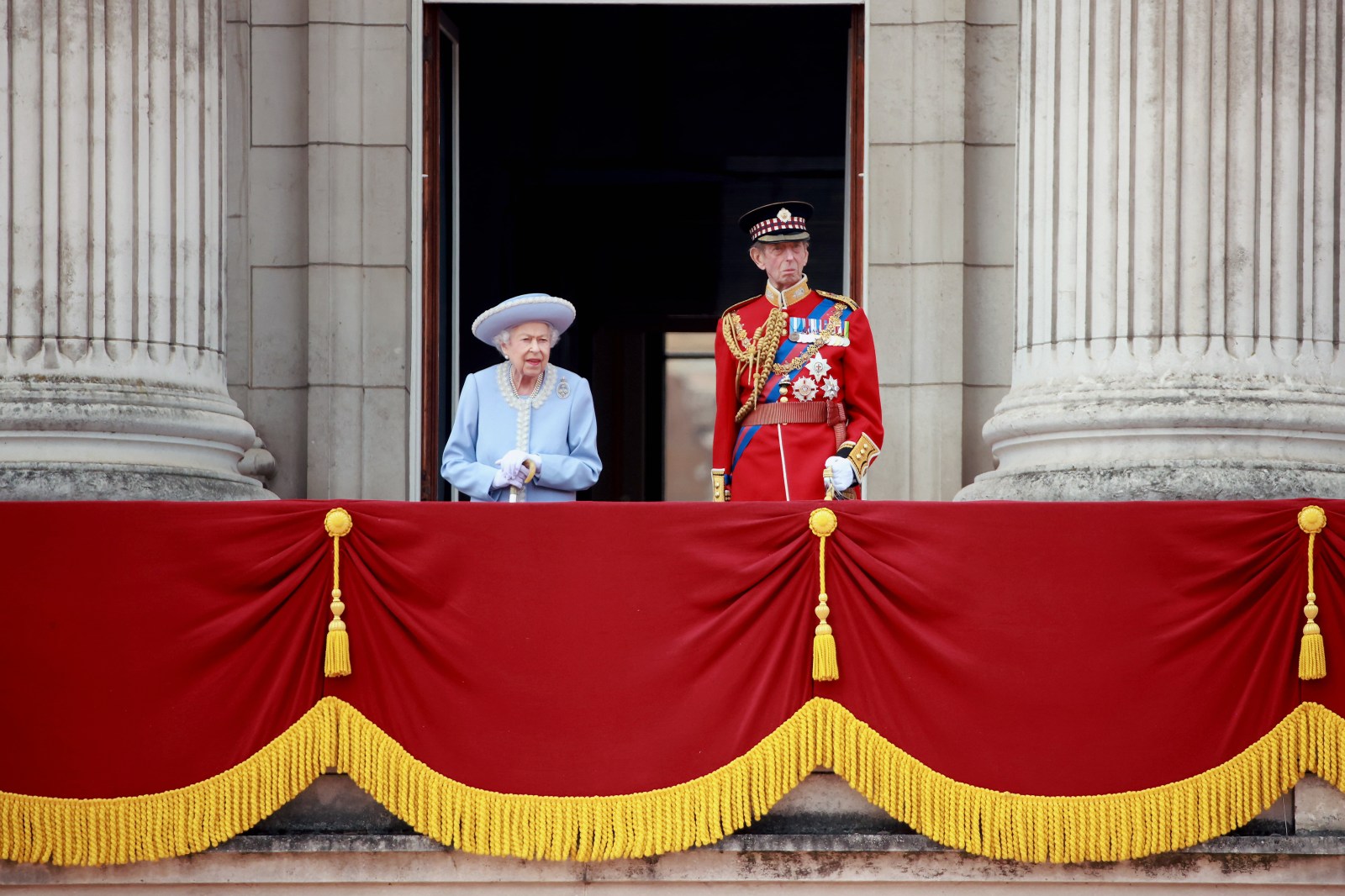 Her Majesty The Queen (L) and His Royal Highness The Duke of Kent (R) on the balcony of Buckingham Palace during the 'Trooping of the Colour' parade in London, Britain, 02 June 2022. Britain is enjoying a four day holiday weekend to celebrate Queen Elizabeth II's Platinum Jubilee marking the 70th anniversary of her accession to the throne on 06 February 1952. EPA-EFE/Sgt Donald C Todd/BRITISH MINISTRY OF DEFENCE/HANDOUT MANDATORY CREDIT: MOD/CROWN COPYRIGHT HANDOUT EDITORIAL USE ONLY/NO SALES

LONDON, June 2 (Reuters) - Tens of thousands of royal supporters lined the streets of London on Thursday to celebrate Queen Elizabeth's Platinum Jubilee and kick off four days of pomp, parties and parades to mark her record-breaking 70 years on the British throne.

Millions of people across Britain and the world are expected to join street parties, watch the festivities and light beacons in honour of the 96-year-old queen, the government said. She has reigned for longer than any of her predecessors.

Senior members of the royal family including Elizabeth’s son and heir Prince Charles, his eldest son William and wife Kate arrived at a military parade on horseback or in an open carriage to huge cheers, while world leaders also sent messages of goodwill.

“Thank you to everyone who has been involved in convening communities, families, neighbours and friends to mark my Platinum Jubilee, in the United Kingdom and across the Commonwealth,” the queen, who appeared on the balcony of Buckingham Palace during a military parade, said in a statement. Read full story

“I continue to be inspired by the goodwill shown to me, and hope that the coming days will provide an opportunity to reflect on all that has been achieved during the last 70 years, as we look to the future with confidence and enthusiasm.”

Families and friends gathered in bright sunshine on the main grand roads running up to Buckingham Palace, cheering the regimental marching bands, waving Union flags and wearing paper crowns. Many had slept on the streets to secure a good position.

Others descended on nearby parks to enjoy picnics and follow the proceedings on big screens.

A number of people caused a brief disturbance by running out in front of marching soldiers on the Mall boulevard before they were dragged away by police. Police said several people were arrested for public order offences.

In a sign of the monarch’s age and recent “episodic mobility” issues that have led her to cancel some engagements, Elizabeth’s personal involvement in the events will be somewhat limited compared with previous major gatherings.

Thursday marks not only the start of the Jubilee, but also the 69th anniversary of the coronation of Elizabeth, who became queen on the death of her father George VI in February 1952.

The celebrations began with the Trooping the Colour, a military parade in central London where 1,500 soldiers marched to military music in ceremonial uniforms of scarlet tunics and bearskin hats.

Elizabeth, holding a walking stick and wearing a dusky dove blue outfit that she also wore for an official Jubilee photograph released on Thursday, took the salute from the balcony of Buckingham Palace.

Senior royals, including Charles, 73, and William, 39, will also carry out other ceremonial duties on the queen’s behalf, although much attention will be focused on those who will not be present.

The queen’s second son Prince Andrew, 62, who settled a U.S. lawsuit in February in which he was accused of sexually abusing a woman when she was underage, is not expected to attend.

Her grandson Prince Harry, now living in Los Angeles with his American wife Meghan, watched the parade but will be absent when the royal family gathers on the palace balcony to watch a fly-past by modern and historic Royal Air Force planes after the parade.

There will also be gun salutes in London, across Britain and from Royal Navy ships at sea at midday. In the evening beacons will be lit across the country and the Commonwealth, with the queen leading the lighting of the Principal Platinum Jubilee Beacon at her Windsor Castle home.

Opinion polls show she remains hugely popular and respected among British people, with one survey this week showing eight in 10 people held a positive view of her, and another found three-quarters thought she had done a good job as queen.

“I cannot think of any other public figure, any other celebrity, any other president … who could possibly have remained so popular,” former Prime Minister John Major told BBC radio.

“Her life has been played out in public – the highs, the lows, the good bits and not so good bits. The queen has represented our better selves for over 70 years,” said Major, one of 14 leaders to have served under Elizabeth.

Not everyone will be joining in the festivities though.

Anti-monarchy campaign group Republic, which is putting up the message “Make Elizabeth the last” on billboards across Britain, said another poll showed more than half of the public were not interested in the jubilee.

By Michael Holden and Kate Holton