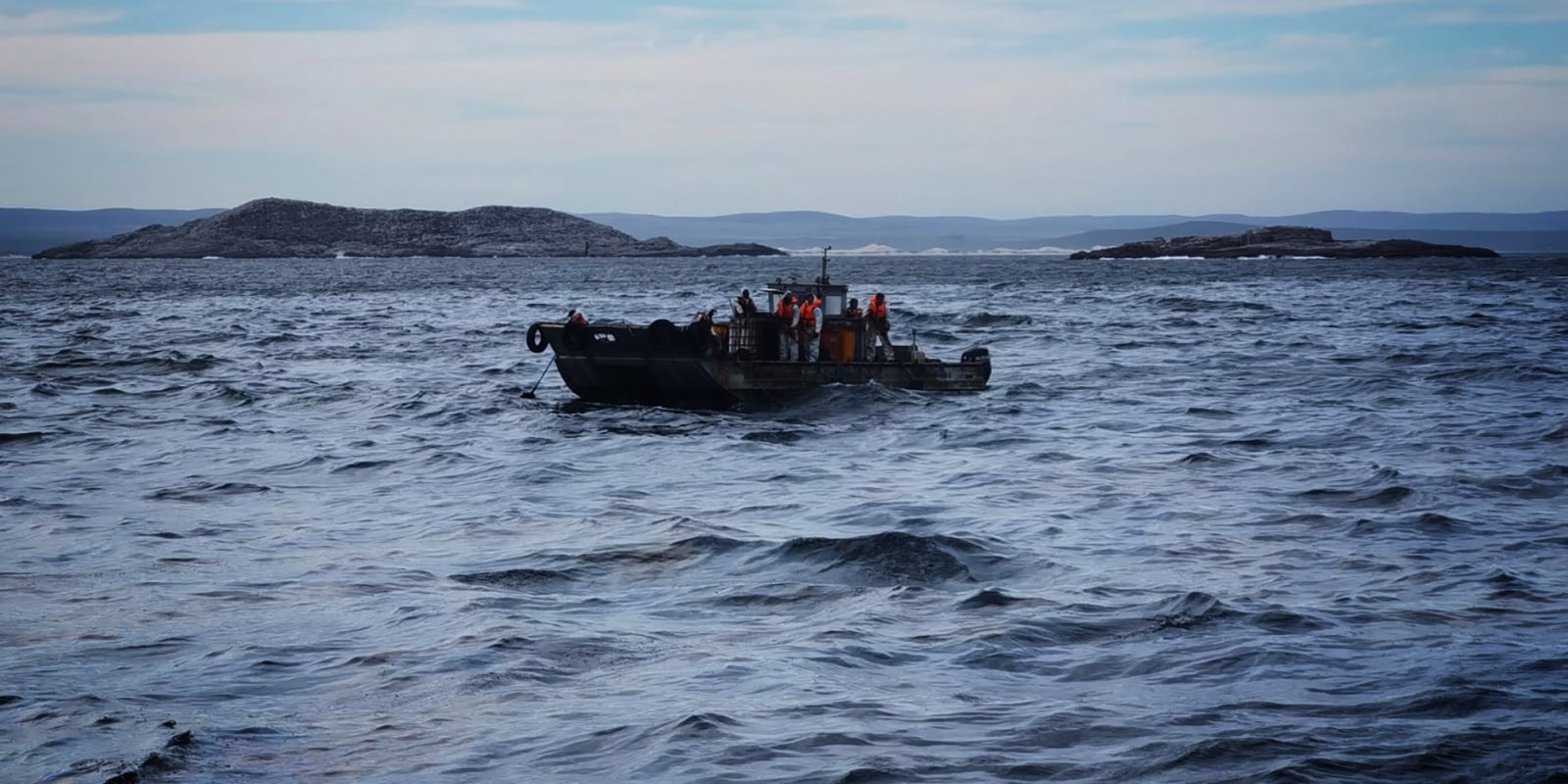 The South African Maritime Safety Authority cleans up after the oil spill in Algoa Bay on Monday, 23 May 2022. (Photo: Supplied)

Environmental organisation Algoa Bay Conservation has called for an immediate halt to the practice, as the Department of Environment, Forestry and Fisheries scales down its clean-up operations in the wake of the most recent oil spill.

The South African Maritime Safety Authority (Samsa) has scaled down its clean-up operations in Algoa Bay after oil was spilt during a transfer process involving two vessels.

According to the group, two Minerva Bunkering vessels — the MT Lefkas and the Umnenga II — were involved in the spill just before midday on 23 May.

The Umnenga II was transferring heavy marine fuel oil to the Lefkas, while positioned at Anchorage 2 (located on the boundary of the Addo MPA) close to Brenton island.

It was reported that a pipe burst and let an estimated 3,000 litres of low sulphur heavy marine fuel oil into the ocean. Emergency procedures were activated and spill clean-up teams commenced work, involving up to six vessels and crews.

On Thursday 26 May, a fixed-wing aircraft, fitted with advanced oil-sensing equipment, conducted an intensive survey that indicated no traces of oil in Algoa Bay.

Samsa spokesperson Tebogo Ramatjie said patrols by SANParks had found no oil on the beaches. There had also been no reports of oiled seabirds being spotted.

“The waste management plan is being executed to ensure the correct disposal of oily waste. The MT Lefkas has been cleaned of all traces of oil; however, the Umnenga II remains outside at the anchorage waiting for a suitable berth so that a small area near the rudder can be cleaned,” he said.

Ramatjie said the investigation into the cause of the spillage is continuing and that bunkering had resumed in Algoa Bay during daylight hours.

A statement from the environmental group said the clean-up continued over the following four days, assisted by spotter aircraft tracking the oil drift towards the sensitive bird islands.

“Notwithstanding the spill response efforts, the oil was dispersed as a surface sheen over an extended surface area in the direction of the St Croix islands and towards Bird Island.

“The impact on seabirds and other animals will only be determined over the next few days. At the date of this report, both vessels have substantial hull oil deposits which still have to be cleaned up for further hazardous substances and possible pollution,” said the statement.

“Reports from the site confirm the vast spread of the oil slick drifting eastwards. Media reports that the oil did not reach the sensitive bird breeding and nesting islands… is misleading because the birds forage throughout the affected oil drift areas…

“The bay is teeming with pelagic fish shoals on the move and the seabirds may well escape the oil spill if foraging away from an oil-impacted area,” said the statement.

Significance of the spill

According to the group, this spill is significant as it involved two oil tankers with large quantities of fuel stored.

“The mothership tanker, Umnenga II, has a reported capacity of 90,000 tons of oil and the smaller vessel, the Lefkas, has 6,320 tons. The transfer was not the same as regular bunkering operations when, on average, 500-ton fuel parcels are transferred.

“It is therefore of a higher risk magnitude because of the quantities and flow rates involved. Presumably, the incident investigation will assess such issues,” said the statement.

The group said this was the second spill in the past four weeks in the area.

“On 23 April 2022, an oil spill was detected by vessel tracking in the same area involving Umnenga II and transfer vessel Kimolos (both operated by Minerva) and has been confirmed by clean-up operations.

“Oiled seabirds were recovered from Bird Island on 3 May,” said the group.

The hazards of ship-to-ship bunkering

The group said ship-to-ship bunkering can best be described as a fuel station at sea that dispenses marine fuel oils which are hazardous and toxic in vast quantities.

“The annual marine fuel oil sale on record in Algoa Bay shows that between 50 and 60 million litres are pumped per month, worth in the order of R500-million per month.

“The numbers are startling, without any doubt… Algoa Bay is the largest filling station in South Africa,” the group said.

The statement said the socioeconomic benefits of ship-to-ship bunkering have been sketched in general terms of employment and other connected services.

“However, the full cash flows to the fiscus and the recipients have not been disclosed in any transparent way.

“Undoubtedly, the prime beneficiaries are the parent oil and energy companies located offshore and thus local financial benefits are questionable, whilst ecotourism and other marine commercial and recreational activities bear the brunt of the negative impact of bunkering on such an industrial scale.”

The group says it is reckless to allow ship-to-ship bunkering in an environmentally sensitive area that lies adjacent to a marine protected area.

“The decision was made without any risk assessment… without an environmental impact assessment (EIA) and without the participation of affected and interested parties.

“Although ship-to-ship bunkering is not a listed activity in terms of National Environmental Management Act regulations, it is submitted that an EIA should have been done because of the highly sensitive locality, the high-risk nature of such operations and the public interest,” said the statement.

It added that the ongoing fuel oil spills are evidence that a proactive approach must take place immediately before a catastrophic incident occurs.

“It is clear from the current spill and clean-up operations that a similar emergency response for a larger spill would be ineffective, with catastrophic consequences.

“This is confirmed by the fact that the spill occurred on Monday (23 May) midday and clean-up operations continued for days in relatively mild weather conditions… [this] is indicative of the difficulties of the containment and inadequacy of equipment,” read the statement.

The group called on Samsa and the Transnet National Ports Authority (TNPA) to cease all ship-to-ship bunkering operations in Algoa Bay offshore limits with immediate effect, until such time as the comprehensive risk assessment has been done, and a comprehensive environmental impact assessment that addresses concerns raised and involves public participation and the biodiversity management plan for the African Penguin (AP-BMP) is finalised.

The group said in the event that Samsa or the TNPA fail to end the bunkering, “we call on the minister of the environment, Barbara Creecy, to issue a coastal protection notice prohibiting the activity until the risk assessment, EIA and AP-BMP are all completed and evaluated”.

“The Algoa Bay conservation and concern group has been proactive in questioning any and all issues that adversely impact on the marine environment of Algoa Bay and drawing them to the attention of the public.

“The first public meeting to inform on ship-to-ship bunkering was convened in 2019 when the first major oil spill occurred, and was instrumental in a moratorium being placed on the granting of further bunkering licences by Samsa,” said the group. DM/OBP