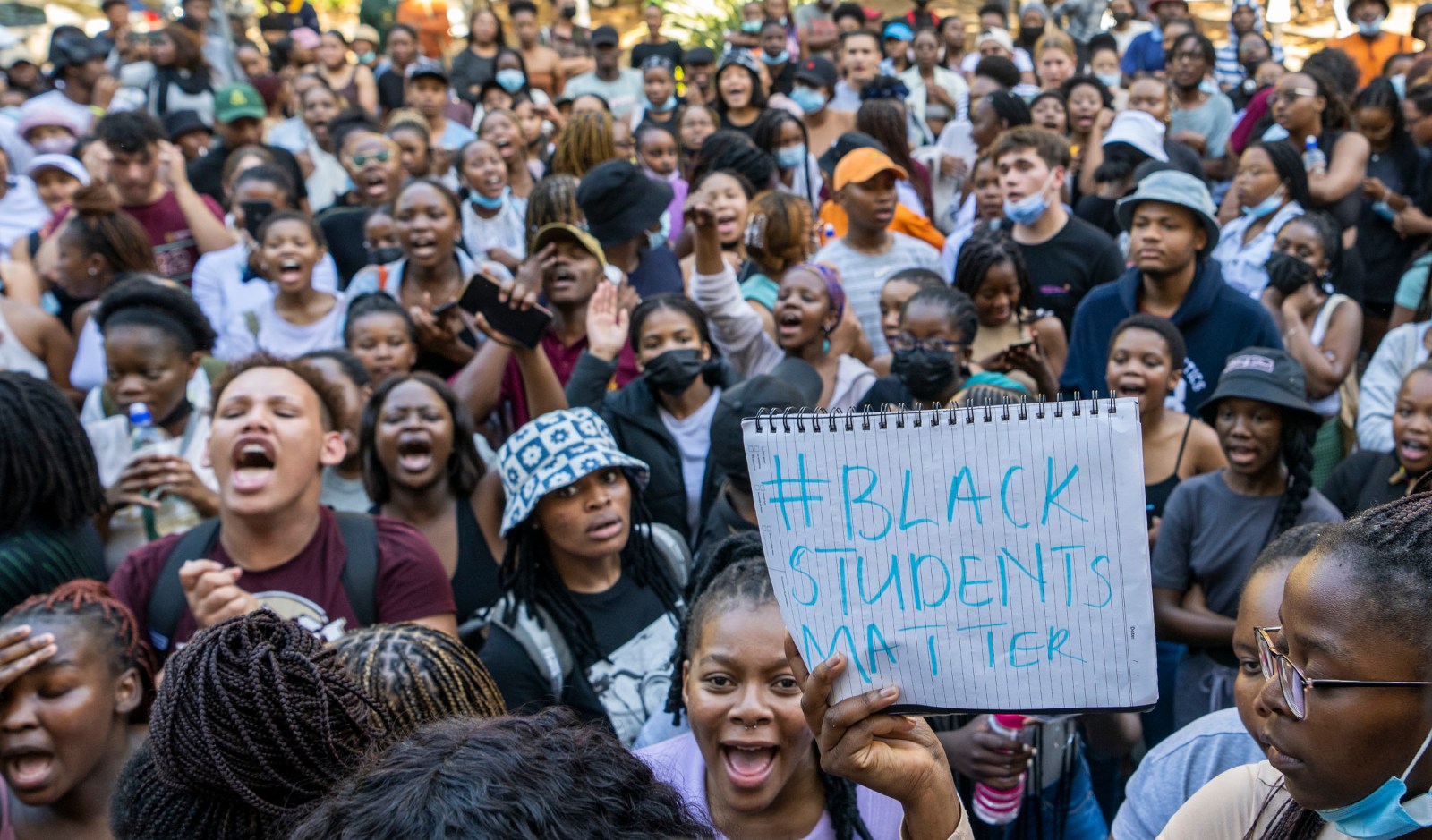 Students protest outside the Admin B building of Stellenbosch University after a video of an alleged racist incident went viral on May 16, 2022 in Stellenbosch, South Africa. It is reported that in the video, a white student can be seen urinating on the personal property of a black student after the white student broke into the black student's room. Outraged students rushed to the university's admin building and demanded that the student be permanently expelled from the institution with immediate effect. (Photo by Gallo Images/Die Burger/Jaco Marais)

We need to open up conversations at the dinner table and the weekend braai about what might have led the young perpetrator to urinate on a black student’s belongings — and the consequences.

The racist incident at Stellenbosch University in which white student Theuns du Toit urinated on the belongings of black student Babalo Ndwayana has elicited strong condemnation from across society. Every black person and the majority of white people are appalled and in disbelief that this incident could occur in a residence of a prestigious university.

However, it is a reality check that living and working among us are racists capable of such despicable and degrading acts. Moving beyond the shock, anger and pain the incident has provoked, it presents an opportunity to open up deeper conversations on racism in our homes, religious institutions, schools, universities and workplaces. This is a real-life, topical, learning and teaching moment that should not be missed.

We acquire our knowledge, skills, attitudes and values both formally and informally. Educators will attest to the difficulty of formally teaching and assessing values and attitudes. It is within our social structures of the family, circles of friends, places of worship and workplaces that attitudes and values are most easily formed, reinforced and reproduced. These are also the sites where they could be challenged and reformed.

Opening up conversations at the dinner table, weekend braai or staffroom table about what could have led this perpetrator to believe that urinating on a black student’s belongings was “a white thing”, the psychological and possible educational effects of this act on the victim, and the appropriate sanction for the perpetrator and restitution for the victim that would best serve justice, is one way to constructively explore and discuss the ongoing racism in society.

This is a generation of undergraduate students born in a democracy, and it is hoped that, after 28 years, we should have young people free of the shackles of racist prejudice and oppression.

Social integration, if not at school, then at least at university, should facilitate social cohesion. But evidently, for some, it does not.

I have seen Babalo Ndwayana and his father speak about the trauma of this racist incident but may have missed the apology and remorse from Theuns du Toit or his father. It is intriguing, though, why a privileged white student who is the son of a wine farmer who would be the employer of black people would be capable of such a racist act.

We are likely to gain a better understanding as this case unfolds in court, but the dialogues that have started need to be continued — the different views on whether the perpetrator should be expelled or given an opportunity to continue studying at the university; whether reconciliation is or should be a possibility; whether the perpetrator should be excluded from not only Stellenbosch University but from all institutions of higher education in the country; whether counselling and academic support will help the victim overcome the trauma of the event to enjoy a positive university experience; whether the victim will be emotionally scarred for life and whether his academic progress will be adversely affected by this racist attack on him.

It is also time for higher education institutions, and particularly those that are historically white, to examine their policies and practices in relation to social transformation.

While many universities have improved their student equity profiles in terms of black students, representativity at the qualifications level may need improvement. Institutional cultures and climates are influenced by student and staff demographic profiles.

In a country where the black population is more than 80% and the white population less than 8%, the skewed race profile of students at Stellenbosch University, unless it has radically changed in the last four years, may need to be addressed.

Whatever the findings of the university and the court about this incident, it needs to be written up as a case study with its accompanying video footage for discussing, understanding and managing racism and diversity during student induction and diversity management workshops.

It would make a valuable resource for training and development. DM168

Q: I work in a finance department on payroll, but my dream is to be a chartered accountant. However, I did not have accounting as a subject in matric. Should I apply straight to tertiary institutions or do I have to do matric accounting first?

A: You should try to first apply directly to universities and colleges that offer accounting qualifications, but you will need to check whether accounting at the senior certificate level is a prerequisite.

You may be able to gain access to accounting qualifications, however, through a different access route known as recognition of prior learning (RPL), if this is accepted at the institution.

Prof Monie Naidoo is an independent education development specialist and career coach. She was previously director of accreditation at the Council on Higher Education.