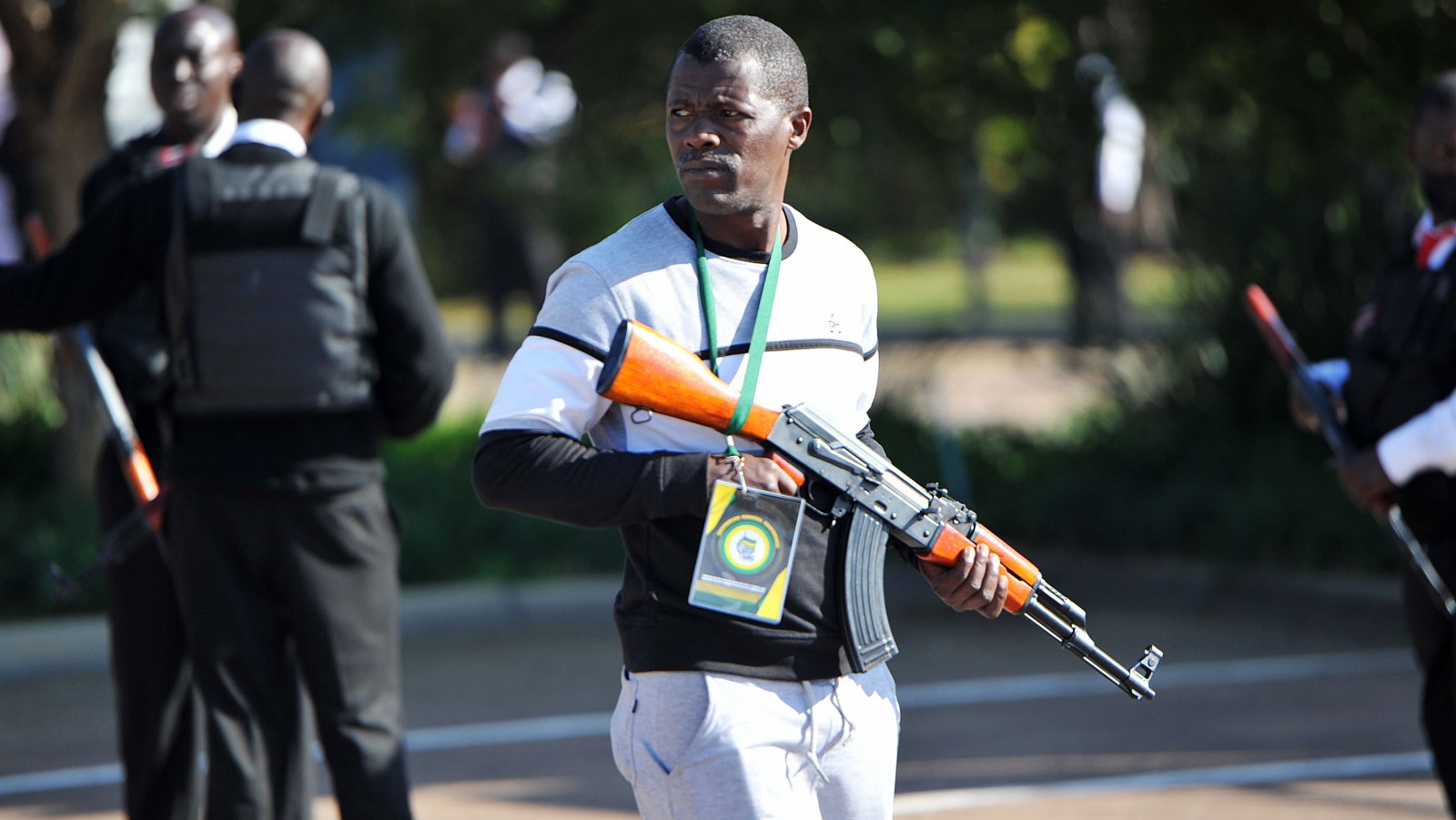 Heavy security at the ANC's Ekurhuleni regional conference at the Indaba Hotel in Fourways, Johannesburg on 28 May 2022. (Photo Denvor de Wee)

The Gauteng ANC leader, premier David Makhura, was so aghast at the scenes unfolding in front of him at the Ekurhuleni conference that he declared it was like a ‘war zone’.

The scenes of chaos at the ANC’s Ekurhuleni regional conference this weekend, coming so soon after similar scenes in the Eastern Cape, raise well-grounded fears about the rest of the ANC conferences coming up this year.

For many, they even raise fears about what will happen at the ANC’s apex gathering, the national conference in December. The stakes are clearly high for many people, and the closer the contest among the factions in each conference, the higher the chaos level grows.

It is not impossible that the lower conferences will clean up the party’s fights and bring a lower level of contestation to the national conference, making it reasonably peaceful. It is also entirely reasonable to foresee the Ekurhuleni conference presaging the Gauteng provincial conference mess, at the cost of losing the province in 2024 for the ANC.

Over the weekend, the Gauteng ANC leader, premier David Makhura, was so aghast at the scenes unfolding in front of him at the Ekurhuleni conference that he declared it was like a “war zone”.

The reasons for the chaos were the very same reasons that have led to so many ANC conferences being delayed for so many years: the fights over credentials. In the simple politics of numbers, the more of “your” delegates you get through the door and into a conference hall, the greater the chances that you will win a leadership election.

This incentivises factions to fight for their supporters’ acceptance and raise as many objections as possible against the opposing faction – exactly what happened at the ANC’s Eastern Cape conference earlier this year.

This is also why the Sedibeng regional conference, also held this weekend, was so smooth – there was no chaos because temperature levels were lower to start with.

As there are still many ANC conferences to go before the main December showdown, the risk of a blow-up is likely to remain high for some time.

This coming weekend, Limpopo is due to hold its conference. Already there has been reporting by Sunday World that there may be a court application to prevent it from going ahead.

This is as the current chair, Limpopo premier Stan Mathabatha, is pursuing a third term, against his Public Works MEC, Dickson Masemola.

It is still difficult to predict what is in store for December, though. If it is true that the chaos level corresponds to a narrow gap between the leadership contestants, then in fact the national conference could still turn out to be relatively peaceful.

Should no credibly strong challenger to President Cyril Ramaphosa appear on the scene, he could even turn out to be the first leader since December 2002 to run uncontested.

Even if that indeed turns out to be the case, it is likely that there will be a tight race for the other positions, particularly for the deputy leader. While there is no clear front-runner at this stage, there is some speculation that as many as five people might put their names in the ring.

There is also, of course, the potential for close elections for other positions, such as secretary-general and the national chair.

Thus, if there is going to be any kind of argument over credentials before the national conference, it is likely to be because of the contest for these positions, rather than the position of party leader.

The recent history of our country has shown how important the position of ANC leader and national president is, reducing at least some pressure within that steam boiler.

Soberingly though, the weekend’s events in Ekurhuleni show how serious the situation at the Gauteng conference could become.

It appears that the deputy Gauteng leader, education MEC Panyaza Lesufi, is likely to contest against the human settlements MEC Lebogang Maile.

Already in February 2021, Makhura had warned that infighting within the province could see the ANC losing power there.

His warning gained more momentum with the 2021 local elections, where the ANC fell below 50% in all three metros in the province. In total, the ANC won only 36% of the votes cast in Gauteng. This came after the 2019 national elections where it was just able to cling to power in the province.

Makhura is obviously correct – the intraparty chaos surely hurts the chances of running and being re-elected. The party members are fighting intense battles for leadership positions in party structures where they are either out of power or very likely to be in the near future.

In other words, these people are fighting for very little ultimate power and possibly almost no patronage.

There may well be a strange and important vicious circle here: the less power available, the more intense the fight for it, which leads to less power being available. People in the ANC may well be entering an inescapable downward spiral.

Certainly, if the ANC loses power in South Africa’s powerhouse in just two years’ time, its power will be severely limited in Gauteng and eroded nationwide. This is exactly what has happened to the party’s Western Cape province, whose voice hardly matters in leadership elections these days.

The real challenge laid down by the chaos at the Ekurhuleni conference is whether the Gauteng ANC can find its way out of this downward spiral.

Worryingly for the national leadership, it is not the only province facing this existential problem. The KwaZulu-Natal ANC is also due to hold a conference later this year, with a history of difficult conferences. It won only 45% of the votes cast at the local polls in 2021.

KZN too may be in danger of further division and of losing political power as a result.

Losing Gauteng and KZN would shut the party out of SA’s richest provinces and saddle it with the less prosperous and significantly more troubled provinces.

This is what could be the real test of this year’s national ANC conference – to find a way to stop this harmful, violent contestation within the party, and to stop the downward spiral it causes – or else. DM