This week – Marching against Shell, tackling mine was...

This week – Marching against Shell, tackling mine waste and kicking butts 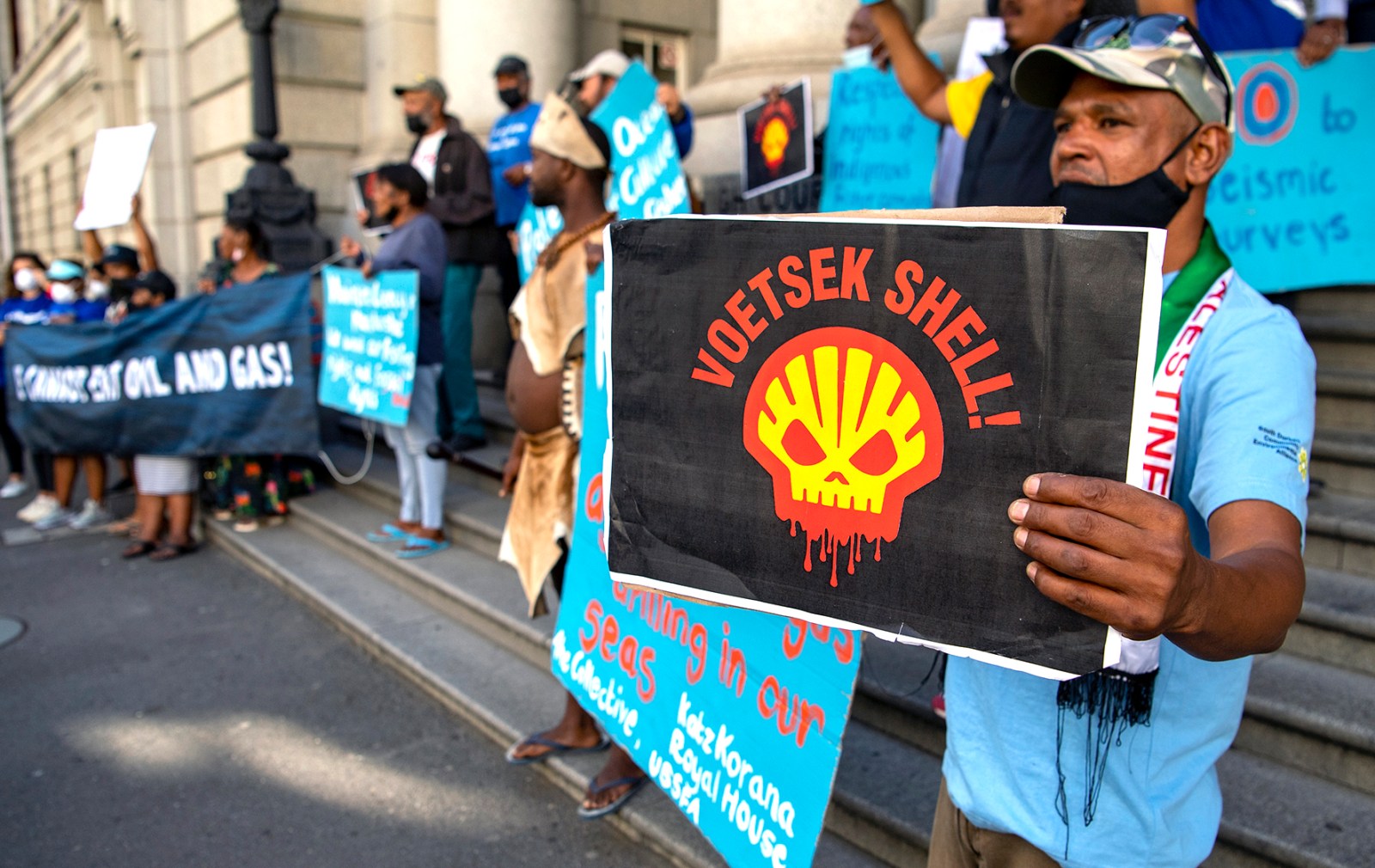 Wild Coast communities are marching to the Gqeberha High Court, where the case against Shell and the Department of Energy continues. There’s also a seminar on South Africa’s mine tailings dams, and young delegates are sharing their experiences of Syria’s Rojava Revolution at a public forum.

On Monday, 30 May at 8am, Wild Coast communities, alongside a delegation of the Amadiba Crisis Committee, are marching against Shell Petroleum in Gqeberha. The march begins at Donkin Reserve and ends at the Gqeberha High Court.

Members of the Kei Mouth, Dwesa-Cwebe, Port St Johns and Amadiba communities are among the marchers.

In December, Shell was temporarily interdicted from blasting for oil and gas in the ocean along the Wild Coast until a decision on the matter had been reached in court, according to the event description. The second part of the case against Shell Petroleum and the Department of Mineral Resources and Energy is taking place over three days in the Gqeberha High Court from Monday.

Advocate Tembeka Ngcukaitobi will put forward the litigants’ case for sustaining the Wild Coast and the affected coastal communities.

Tuesday, 31 May is World No Tobacco Day. The theme is “Tobacco – Threat to our environment”.

The tobacco industry has a significant harmful impact on the environment, placing unnecessary pressure on the planet’s already scarce resources and fragile ecosystems, according to the United Nations information page on the event.

The growing, manufacture and use of tobacco poisons water, soil and beaches with chemicals and toxic waste, as well as cigarette butts. World No Tobacco Day is intended to encourage people to stop using tobacco in order to save the planet. 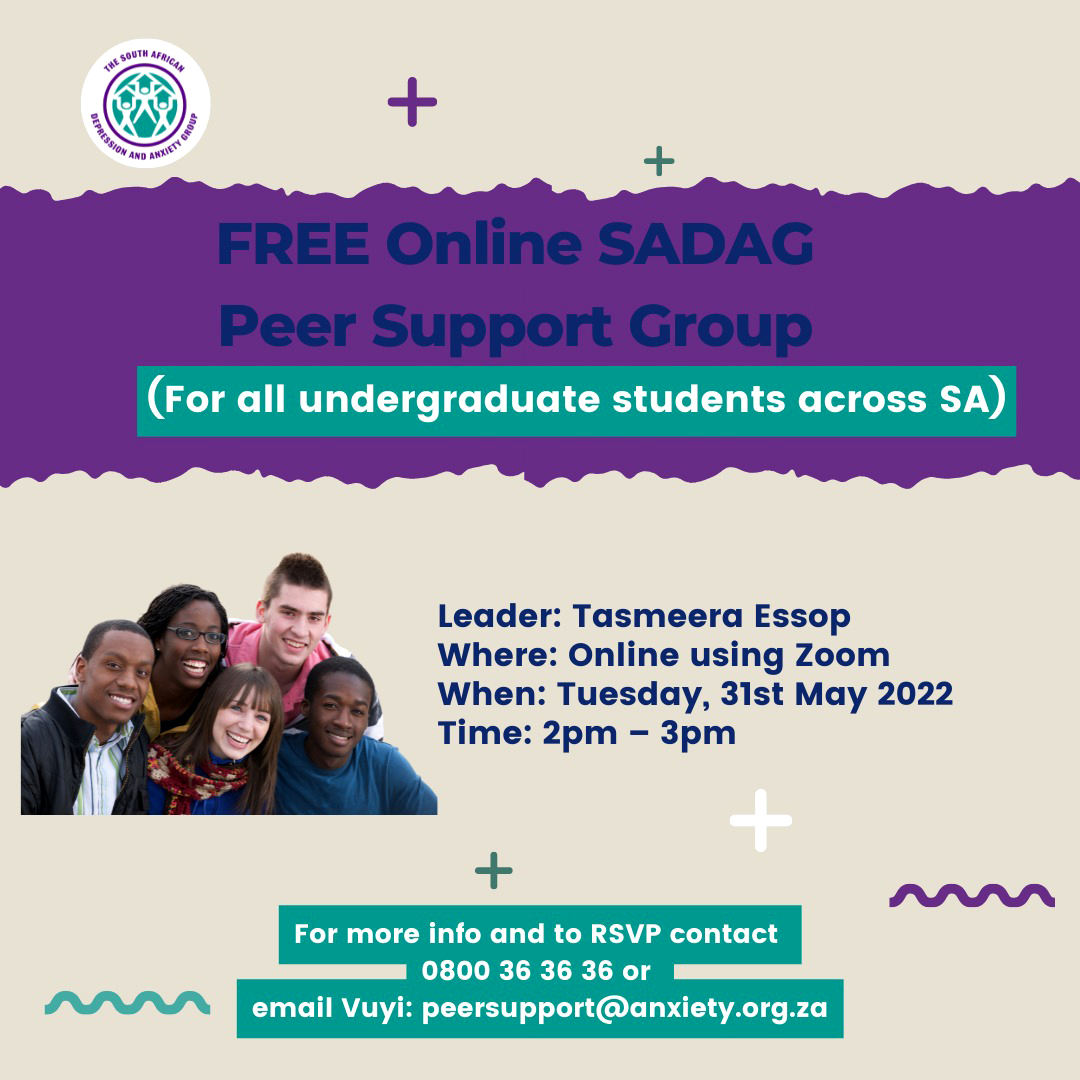 On Tuesday at 2pm, the South African Depression and Anxiety Group will host a free online peer support group for undergraduate students across South Africa. Tasmeera Essop will lead the discussion. 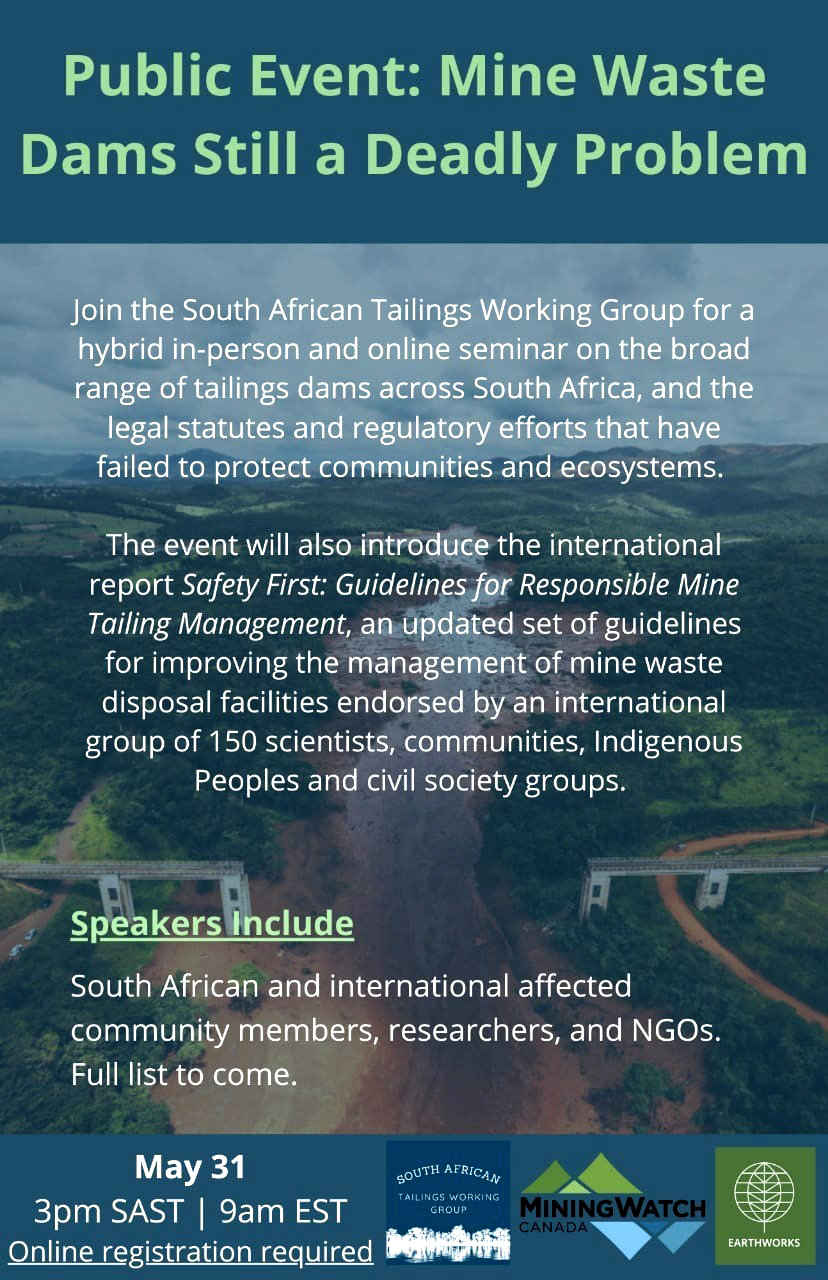 On Tuesday at 3pm, the South African Tailings Working Group is holding a hybrid seminar on the presence of mine tailings dams across South Africa and the failure of legal statutes and regulatory efforts to protect communities and ecosystems from them.

Tailings dams are mine waste facilities whose environmental, social and health impacts are extreme. Waste from gold mines, for example, constitutes the single-largest source of waste and pollution in South Africa, according to the event description:

“At the Witwatersrand gold fields, more than 120 mines have extracted over 116,00 tons of gold and uranium, leaving a legacy of more than 270 tailings facilities that cover approximately 400km2. Contamination, including air, water and soil pollution, have significant health impacts on surrounding communities, many of which are composed of low-income homes.”

The working group has found that the current laws and regulations in the country do not prevent or mitigate the harmful impacts of tailings dams.

A new international report, Safety First: Guidelines for responsible mine tailing management, will be introduced at the event. It is an updated set of guidelines for improving the management of mine waste disposal facilities, endorsed by an international group of 150 scientists, communities, indigenous peoples and civil society groups. 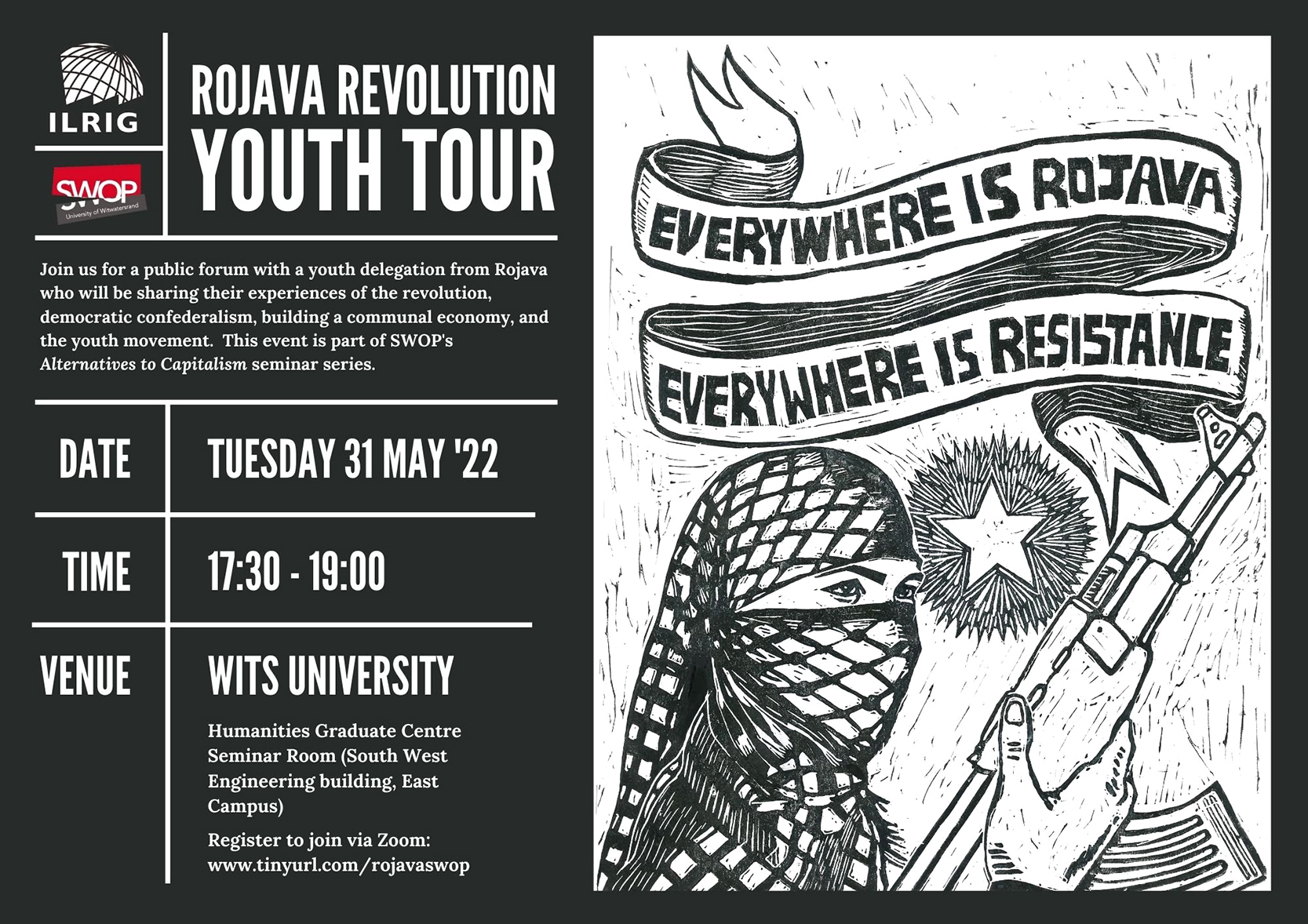 On Tuesday at 5.15pm, the Rojava youth delegation will be speaking as part of a public forum at the Society, Work and Politics Institute (Swop) at Wits University.

“The Rojava Revolution began in 2012 in northeastern Syria as part of the Arab Spring. The Revolution is based on an ideology and way of organising called democratic confederalism. At the heart of this is the aim of overcoming the state, capitalism, environmental destruction and patriarchy and replacing these with structures of direct democracy, relations of egalitarianism and social ecology,” reads the event description.

Since the onset of the revolution, people in Rojava have built structures of self-governance, such as federated communes. They have also attempted to build a communal economy to overcome capitalism and exploitation.

The event forms part of Swop’s “Alternatives to Capitalism” series.

Wednesday, 1 June is the Global Day of Parents, which aims to recognise the critical role of parents in the rearing of children. Children should grow up in a family environment and an atmosphere of love and understanding, if they are to develop fully, according to the UN.

It is an opportunity to appreciate parents for their selfless commitment to children.

“Families bear the brunt of the Covid-19 pandemic. As the anchors of the family and the foundation of our communities and societies, parents have the responsibility of sheltering their families from harm, caring for out-of-school children and, at the same time, continuing their work responsibilities.”

“By introducing family-friendly workplace policies and practices, companies and organisations will be in a better position to promote children’s safety and well-being and provide systematic support to employees.”

On Wednesday at 2pm, Trade and Industrial Policy Strategies, in collaboration with the Green Economy Coalition and the delegation of the European Union (EU) to South Africa, will be hosting a webinar as part of the Green Recovery Dialogues. The topic is “Unpacking the Green Economy Ecosystem: Business Development Support Services for Local Green Entrepreneurs”.

The talk takes place against the background of the Covid-19 pandemic and associated policy responses that have disrupted economies and societies around the world, exacerbating poverty, inequality and unemployment.

“Governments have responded through… policy packages aimed at cushioning negative impacts on households and businesses, and reigniting the economy. Furthermore, strong calls for a ‘better, fairer and greener’ recovery have led many governments to commit additional resources towards the transition to a green economy,” according to the event description.

The webinar will unpack South Africa’s recovery efforts with a focus on the green economy. Emphasis is placed on the need for increased support for local green entrepreneurs.

Friday, 3 June is World Bicycle Day. Regular physical activity such as cycling has significant health benefits. World Bicycle Day aims to bring attention to the advantages of using bicycles, including:

“Meeting the needs of people who walk and cycle continues to be a critical part of the mobility solution for helping cities decouple population growth from increased emissions, and to improve air quality and road safety. The Covid-19 pandemic has also led many cities to rethink their transport systems,” according to the UN. DM/MC