Calves and cows split up as export terms go out the win... 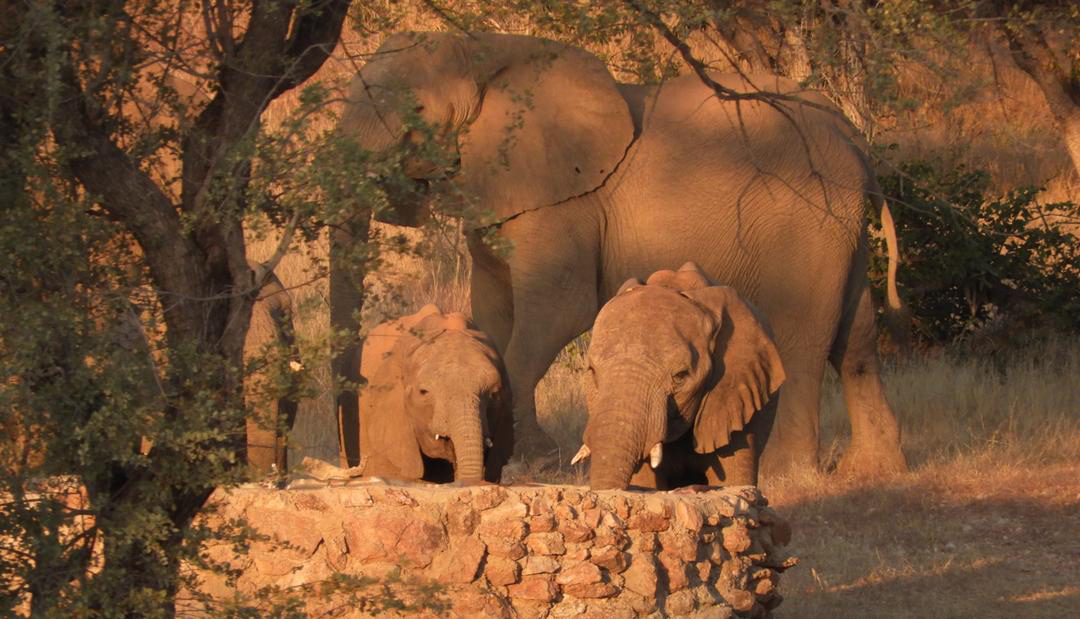 Two of the Namibian Kamanjab elephant herd calves left behind by the capture team. The original tender called for only whole families to be removed. (Photo: Supplied)

At least three calves of the wild-caught Kamanjab desert elephant herd in Namibia have been separated from their mothers, while the captured elephants have been sent to zoos in the United Arab Emirates.

In spite of an official undertaking to not split up elephant “families” during their capture and export to the United Arab Emirates, at least three calves were separated from their mothers and the Kamanjab herd sent to two zoos are now split into three groups.

This is a contradiction of the original terms imposed by the December 2020 tender issued by the Namibian Ministry of Environment, Forestry and Tourism (MEFT), which, among other requirements, specified that “Tenderers will capture the entire herd as per lot size and will not leave infants/juveniles behind in order to not disturb social group”.

North West trophy hunting, the ghost and the dodgy deal — how Namibian tuskers got to Middle East zoos

Not only did the Odendaal syndicate not capture the entire 30-strong Kamanjab herd as required, but in the process separated at least three cows and their calves, it was subsequently established.

The Kamanjab herd then was split into three groups upon arrival in the United Arab Emirates, contrary to accepted elephant conservation practices to keep the pachyderms’ family structures intact.

Of the 24 elephants, including two newborn calves, sent to the Middle East, 11 each were to go to the Al Sharjah African Theme Park and the Al Ain Zoo, but only eight were reported to have arrived at the latter.

Five elephants, which appeared to include the newborns and their mothers, appear to have been sent to a private zoo believed to belong to one of the UAE sheikhs, said veteran filmmaker Karl Amman, who has been tracking the animals’ whereabouts from Dubai.

A MEFT spokesperson told reporters that the elephants had all adapted well and were feeding normally in their respective new homes. This could not be independently verified.

However, one younger female calf whose mother was left behind during the capture process outside Kamanjab in September, had been in poor condition and is suspected not to have survived the journey to a non-range country.

Deputy director of MEFT’s scientific services Kenneth /Uiseb admitted that a small group of five or six members of the Kamanjab herd had been left behind. These are three young bulls, two cows and a juvenile female, it was confirmed.

However, two young calves were subsequently found wandering around on their own for two to three weeks before they were found by the rest of the surviving herd, photographic evidence showed.

Of the thousands of elephants that roamed a century ago between the Etosha Pan and the ephemeral river systems to the west of Namibia’s largest nature park, only a handful remain, mostly in the Ugab River about 200km to the south.

The MEFT claimed previously that there were nearly 2,000 elephants left in the arid northwestern Kunene and Erongo regions, but in reality only about 10% of the original population remained, besieged on all sides by encroaching communal cattle farmers and trophy hunters.

A report late in 2021 by Dr Adam Cruise and Issy Sasada warned that this entire population was now at risk of collapse, owing to overexploitation, drought and human encroachment. DM/OBP