Blitzboks back on top of World Series despite London fr...

Blitzboks back on top of World Series despite London frustration 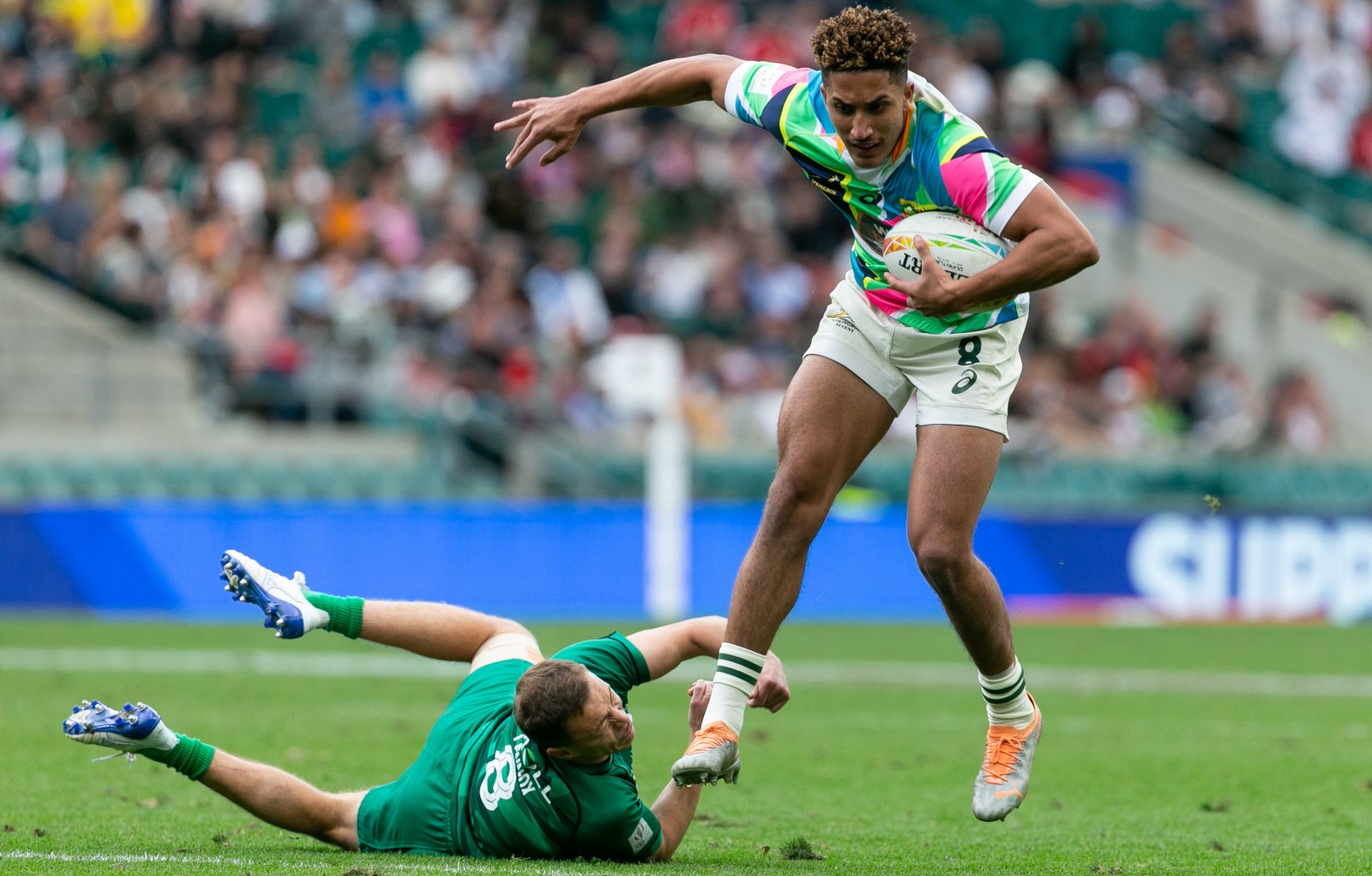 Jordan Hendrikse of South Africa in action against Ireland on day two of the HSBC London Sevens at Twickenham in on Sunday, 29 May 2022. (Photo: Juan Jose Gasparini / Gallo Images)

The Springbok Sevens team could secure their fifth World Series title in Los Angeles in August after moving back to the top of the 2022 standings.

The Blitzboks edged closer to retaining their HSBC World Sevens Series title after finishing fifth in the London leg at the weekend, but it was another frustrating tournament for the injury-ravaged squad.

One tournament in the 2022 World Series remains, with South Africa in first position with 124 points, followed by Australia (122) – who ended up winning the tournament at Twickenham after beating the Blitzboks in the Cup quarterfinals – and Argentina (118).

Any one of the three could be crowned World Series winners, but it will have to wait until August. The final leg takes place in Los Angeles in 88 days, but between now and then South Africa and Australia will also compete in the Commonwealth Games in Birmingham in July.

South Africa put in a much-improved performance in London and went unbeaten on Saturday as they secured their quarterfinal berth for the following day, scraping past Argentina (26-19), Ireland (19-12) and Kenya (24-21).

But the Blitzboks went down 21-17 to Australia in the quarterfinals on day two, which meant the best they could do was end fifth – which is what they achieved.

“There is frustration, especially after day one where we played well,” said coach Neil Powell.

“We lost concentration against Australia at crucial times and that cost us, basically. The players need to understand the big moments in a game and how to play those correctly. If you don’t, like we did today, you will not be successful.

“We made two such mistakes against Australia and it cost us 14 points, and ultimately the game. We need to tell the players where they made mistakes – if not, they will not learn from those.”

After winning all three pool matches, there was an air of positivity, especially as Argentina – series leaders going into London – failed to qualify for the cup quarterfinals.

“It was a good day, results-wise, for us,” said captain Siviwe Soyizwapi after day one.

“There is always something to work on; we never have a perfect game and today was another example of that. We made some mistakes, but we did come out to make ourselves and the jersey proud and we achieved that, I feel,” he said after his side’s three victories on Saturday.

Powell, who was particularly disheartened after the previous week’s result in Toulouse, where the Blitzboks failed to advance to the quarterfinals for the first time in nine years, applauded his side’s unbeaten group-stage phase.

“To put away a very competitive Argentina side in the first game, then outplay Ireland in the second game and beat a charged-up Kenya was rewarding,” he said.

A noticeable improvement in the Blitzboks’ game was their improved discipline from their disappointing result in Toulouse a week ago.

“The different results today from last weekend were because we went back to that system. Last week we were guilty of not doing so. We saw the result. We went back today to what works for us and the results are there,” said Soyizwapi.

“The effort was there last week; the implementation of our roles was not there. We changed that. We were far from perfect, but we laid a good foundation today.”

The squad left for the European leg of the sevens circuit rejuvenated after a month spent recuperating mentally and physically. However, disaster struck just before their departure.

“We had a tough tour and it started off badly with Selvyn Davids ruled out on the morning of our departure to France, but apart from that we also need to look at ourselves and why we are making mistakes under pressure,” said Powell.

The coach was able to put the London leg in perspective as the sevens circuit now takes a three-month break before the final leg: “We won five and lost one, as did Australia, who won the tournament. The margin at this level is so small. We made two mistakes in six matches and finished fifth.”

The Blitzboks regrouped after their loss to Australia to record wins over Spain (24-12) and Ireland (14-5) to secure fifth place in London.

The 13 points gained from the London tournament moved the South Africans back to the top of the 2022 World Series log after being pushed into second following the Toulouse leg.

They started the London event two points behind Argentina, but with the South Americans unable to get out of the pool for the cup competition, South Africa reclaimed the lead they held since the opening tournaments in Dubai in December.

“It is going to be an interesting time until September, with the Commonwealth Games in July, the last World Series event in August and the Rugby World Cup Sevens in September.”

In a trans-Tasmanian clash for the London title at Twickenham, Australia beat New Zealand for the first time in a cup final in 20 years, winning 19-14 after extra time.

The hero of the match was Henry Paterson. The deceptively quick forward scored a hat-trick, including the match-winner as he dived over in the corner in sudden death during extra time.

The final was a rematch of their opening game of the weekend when New Zealand defeated the Aussies 24-19. That was the last loss of the weekend for the Australia Sevens team as the cup final victory capped a brilliant tournament for the side from Down Under.

The young Australian squad beat the Blitzboks in the quarterfinals and Samoa (28-14) in the semifinals en route to the final. DM