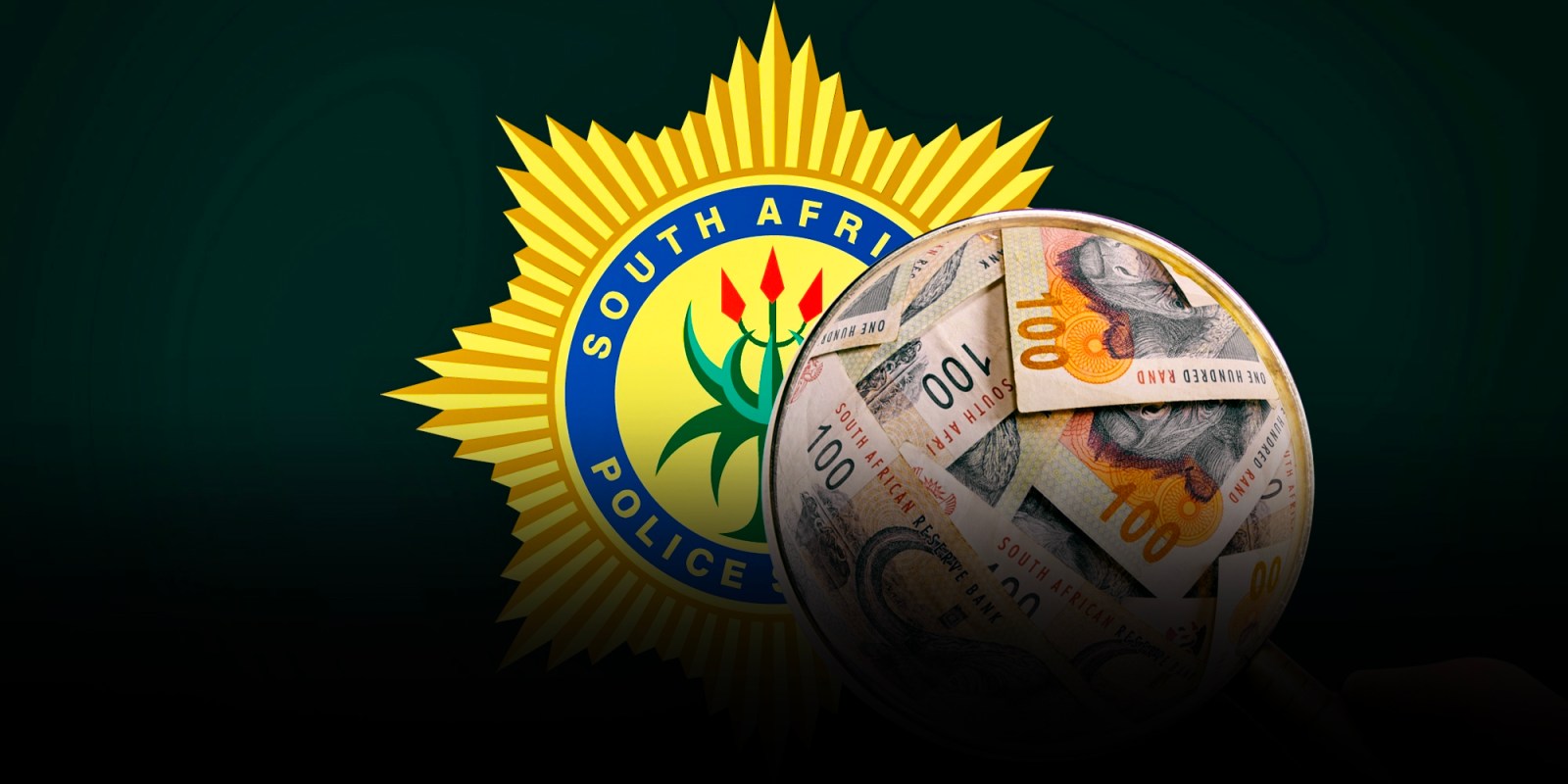 Curious coincidences in investigations relating to questionable police service providers led the National Prosecuting Authority to believe that a family racket based in Pretoria uses Sassa pensioners, friends and family as a front to obscure their crooked dealings with the state. So far, one lieutenant-general, three brigadiers, two colonels, two lieutenant-colonels and a senior clerk in the police’s supply chain management division were arrested in several cases, on charges of corruption and fraud, along with Chetty family members from Gauteng and their Gqeberha friends.

Salamina Khoza, once an admin clerk who lost her job in 2011 and who now describes herself as a 67-year-old “Sassa pensioner” living in Soshanguve, is the sole director of four companies that landed a number of lucrative state contracts – particularly with the police.

Receiving more than R10-million, these contracts included the supply of furniture, ties embroidered with the SAPS emblem as well as personal protective equipment (PPE) during the Covid-19 pandemic.

About 650km southeast of Soshanguve, in Croftdene, Durban, is another Sassa pensioner whose company also raked in millions from the police. Sarathamoney Devi Sigmoney, who previously worked at Shoprite Checkers, is 66 years old and the sole director of a company that has received north of R3-million since 2016 for supplying police offices nationwide with furniture.

Yet, neither Sigmoney nor Khoza’s expenses or assets suggest they own or manage a lucrative business. In fact, the addresses of their businesses, registered on the CIPC database, are in residential areas, not fit for the purpose of manufacturing the goods they claim to sell. And when recently arrested on charges of corruption, Khoza told the court she was poor and could only afford R500 bail and not the state’s proposed R20,000.

Sigmoney and Khoza, the National Prosecuting Authority (NPA) found, are a paper-thin facade.

To catch a cop

In an investigation involving 23 crooked cops and about 30 companies that received more than R100-million in questionable state contracts, the NPA has arrested and charged members of the Chetty family, who live in Pretoria and Midrand, and their associates for running a vast, corrupt organisation.

Since at least 2016, Kishene Chetty and his father, Krishna, used companies registered in the names of employees, family members, friends and Sassa pensioners to fleece the state, notably the police, the NPA’s Investigative Directorate (ID) found.

Khoza, for example, is the sole director of Siyangoba Trading and Projects, Isasalethu Construction and Office Consumables, Eagle Eye Multipurpose Cleaning and Sfikile Furniture and Projects. The scam used Khoza to hide Chetty’s hands in the businesses, but the directorate found the Chettys to be the beneficial owners, especially since Kishene had sole access to the companies’ accounts and internet banking facilities.

The ID indicated the true total contract value of the Chetty racket may be 10 times higher than first anticipated. The investigation continues.

The true damage done to South Africa and her people is, however, not through the theft of state money by one family racket, but rather the corrupting of an entire chain of command in the police’s supply chain management division.

The Chettys seem to have counted the following eight police officers and a clerk as their rainmakers:

Before their arrest in February 2022, some of these officers retired, perhaps sensing looming disaster. The rest have since been dismissed and are awaiting trial.

The trouble is that corruption in one case often breeds corruption in several others which, over time, establishes a systemically dysfunctional system.

Like in the case of Mokwena, who sobbed in court in February, asking for bail.

He was not only arrested in the Chetty case, but is also the co-accused along with acting National Commissioner Khomotso Phahlane and Deputy National Commissioner Bonang Mgwenya, facing 390 counts of fraud and corruption of about R200-million in the unrelated “blue light tenders” case before the court.

Corruption must also remain hidden to be successful. In the attempt at hiding the truth, more crimes are often committed. Like in the case of the Chetty rainmakers.

The ID slapped Mokwena, Ramanjalum, Mogotlane, Naipal, Makhetha, Marney and Mabasa with charges of corruption for accepting the proceeds of crime when Chetty and Khoza paid their legal fees to defend them in court.

The story here needs some context.

Kishene and his father Krishna Chetty were arrested in February 2021, along with 24 senior police officers and 20 friends and employees. The ID’s 600-page indictment listed 72 accused, which included 26 companies, and charged them with more than 75 counts of fraud, money laundering, corruption, forgery and theft. The Chetty racket, the ID argued, received at least 50 fraudulent police contracts between 2016 and 2020, worth a total of at least R100-million.

A month later, however, the court lost its patience with what it termed the NPA’s “delay tactics” when prosecutor Tilas Chabalala said the team was waiting for a racketeering certificate to be issued in the case by National Director of Public Prosecutions Shamila Batoyi. Magistrate Thandi Theledi struck the case off the roll.

Smelling blood, the Investigative Directorate kept at it.

A year later, in February 2022, the ID charged Chetty, Khoza (the Sassa pensioner), the nine police rainmakers as well as employees Lorette Joubert and her daughter Maricha, Kumarasen and Volan Prithiviraj for 10 counts of fraud, theft, forgery, corruption and the use of proceeds of crime.

This time, for alleged crimes committed in receiving a fraudulent PPE tender to supply the police with latex gloves, for faking a BBBEE company certificate and for using the proceeds of this contract to fund the legal fees of police officers Mokwena, Ramanjalum, Mogotlane, Naipal, Makhetha, Marney and Mabasa, Chetty and Khoza are further accused of paying the legal fees for the Jouberts and Prithivirajes, too.

Investigative Directorate spokesperson Sindisiwe Seboka said the ID was looking to “soon” enrol the main Chetty case again — this time, presumably, with the racketeering certificate ready. The drama, as the Nixon Watergate scandal taught the world, always explodes in the cover-up.

Brigadier James Ramanjalum was refused bail because he allegedly plotted to kill investigators and prosecutors working on his case.

Making lemonade from lemons, the newly invigorated ID charged Ramanjalum for these offences too. Along with Marney, a clerk in his office, Ramanjalum is charged with eight counts of perjury and accessing data in contravention of section 86(1) of the Electronic Communications and Transactions Act of 2002.

According to the ID, Ramanjalum illegally, and with the help of Marney, accessed data captured by the automated vehicle locator (AVL) device in the car used by the investigators who were probing their wrongdoing.

The case of how the second Sassa pensioner, Sarathamoney Devi Sigmoney, was used to shield alleged fraud and corruption, at first seemed totally unrelated to, and, in physical distance, far removed from the Chettys.

Events were set in motion when Colonel Fernando Luis from the Anti-Corruption Unit in the Eastern Cape complained about the quality of furniture delivered to his unit by a company called KJP Traders.

Luis was forced to receive office furniture he did not need nor want. Worse, the furniture was of poor quality, he complained. When he took up the matter with the manufacturer, they told him he was “obliged” to receive and sign for the furniture and that “it was an instruction from SAPS Head Office”.

Smelling a rat, Luis reported his suspicions and the investigation landed on the ID’s desk.

When the investigators rocked up at KJP Traders’ known manufacturing address in Pretoria West, they found the premises were shared by a company they were already investigating: Counterpoint Traders, owned by the Chettys. The ID’s investigation confirmed that KJP Traders allegedly used the police’s corrupt supply chain management division to receive millions in fraudulent furniture contracts since at least 2016.

Like in the case of Chetty, Govender and Pillay were not overtly linked to KJP Traders, but were found to be the ultimate owners and beneficiaries, the ID claimed.

Govender and Pillay were arrested earlier this month, along with Neil Naidoo, director for community police relations in the office of MEC Tikana Gxothiwe, for attempting to bribe the investigators to forget about KJP Traders.

To save a country

Khoza and Sigmoney, the two Sassa pensioners, both received a few thousand rand a month to allegedly front for fraudulent companies, Scorpio is told.

The police officers involved were allegedly caught trying to cover up their crimes by committing even more wrongdoing. The NPA’s ID caught up with them and their cases will be tested in court.

The harm done to the police by private business interests, greed and a devastating lack of consequence management will, however, need time to correct. DM