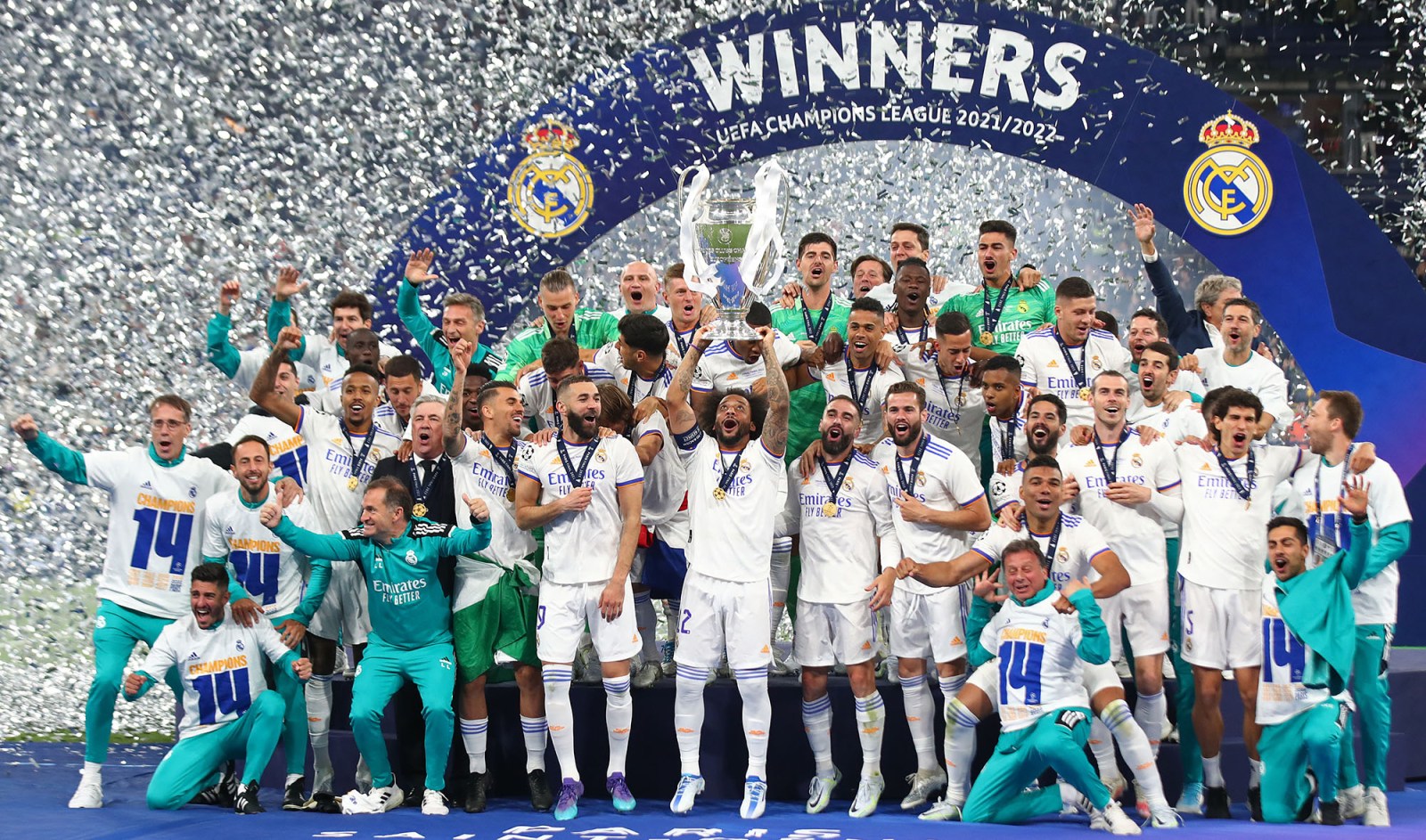 Marcelo of Real Madrid lifts the trophy after the UEFA Champions League final against Liverpool at Stade de France in Paris on 28 May 28, 2022. (Photo: Chris Brunskill / Fantasista / Getty Images)

When a self-assured Real Madrid used their one chance against Liverpool to score and win the Champions League for a 14th time in Paris, coach Carlo Ancelotti became the first coach to claim the title four times.

A “winning culture” may be one of the most overused terms in modern football, but Real Madrid and Carlo Ancelotti proved on Saturday, 28 May, at Liverpool’s expense, that there truly is meaning and value in the concept.

With the 1-0 win over Jürgen Klopp’s side, Ancelotti became the first coach to claim the Champions League four times, with his second victory as Real boss coming after two triumphs with AC Milan.

As for the Spanish champions, this was the 14th time they have won Europe’s elite club competition — twice as many as the next most successful team, Milan.

That pedigree, on the bench and on the field, has created a calm confidence that has seen them come through the toughest tests in this year’s competition.

To reach the final, Real came through a knockout stage that first saw them up against a Paris St Germain side with Lionel Messi, Neymar and Kylian Mbappe. They came back, from 2-0 down on aggregate, to progress thanks to a Karim Benzema hat-trick.

Defending champions Chelsea were next, beaten in extra time thanks to another Benzema goal before the Frenchman then got the decisive goal in the remarkable late comeback to beat Premier League champions Manchester City in the semifinal.

There was no such drama at the Stade de France on Saturday, 28 May, where, after surviving some early Liverpool dominance and suffering the setback of a disallowed Benzema goal, Real took a grip on the game after halftime, got their goal and then, with help from goalkeeper Thibaut Courtois, defended their lead.

Ancelotti’s success has been founded on strong and trusting relationships with his senior players — from the days when Paolo Maldini organised his Milan defence to the current faith he shows in Benzema and Luka Modrić to get Real over the line.

The understated confidence was evident from the moment Real entered the ground in sharp suits and ties, as though they knew they were attending an awards ceremony.

In marked contrast, Liverpool’s players got off their bus in T-shirts and tracksuits and it was not the only clash of cultures in the build-up to the game.

While Klopp boasted about his team being “mentality monsters” and never struggled to find superlatives to describe his players, Ancelotti, true to form, was much more understated.

The Italian adopts the same approach on the touchline — rarely showing emotion, trusting his players to follow his game plan without the need for arm-waving and shouting. But that restrained demeanour disguises a too-often underrated tactical astuteness from the Real coach.

Ancelotti’s side defended deep, an approach that forced Liverpool to choose between pushing on and risking leaving space for Real’s deadly counter-attacks, or sitting in space themselves and playing a slower passing game.

Klopp’s players adopted the latter approach and that meant they were forced to play at a slower tempo and with little of the aggressive, fast attacks down the flanks that has been their hallmark under the German.

With the ball, Real were patient but they, and particularly Modrić, frequently looked to play the ball over the back of Liverpool right-back Trent Alexander-Arnold, an approach that created some of their better moments.

After the break, Real stepped up their tempo with the ball, imposing themselves in midfield, and Liverpool struggled to move into a higher gear, until a late spell of pressure in their desperate search for an equaliser.

Although Courtois was forced into action on several occasions, there was never a hint of panic in the way Real defended, their self-belief and confidence in their abilities seeing them through to the final whistle.

It was the performance of a Real team that knows how to win in the biggest games, something which Klopp’s side for all their qualities — and despite one Premier League title and one Champions League triumph — have yet to truly learn.

In their six games against top-four opponents in the Premier League this past season, Liverpool failed to win, drawing them all. In the two domestic Cup finals they won against Chelsea, they failed to score, claiming the trophies after shootouts.

Liverpool are talked about, along with Manchester City, as one of the two best teams in the world. Yet it is Real, seen by many at the start of the season as an ageing, fading force, who finished with a rare LaLiga and Champions League double.

Although Klopp creates the excitement and the viral video moments, it is Ancelotti who heads into the Paris night with the quiet satisfaction of having become the most successful manager the Champions League has seen.

Liverpool deserved more from their losing final after dominating the match, but they will be back to challenge again for Europe’s elite club trophy, Klopp said.

Vinicius Junior scored just before the hour, with the Spanish champions’ only attempt on target. It was Real’s fourth Champions League title in seven years as they improved their impressive record in the competition with their eighth victory in as many finals.

“We had more shots on target but the most decisive stat is on Madrid’s side,” Klopp told a media conference. “They scored a goal and we didn’t. That’s the easiest explanation in the world of football. Hard and harsh.

“When the goalkeeper [Courtois] is man of the match, then something has gone wrong for the other team. We could have played better football and they could have, but they didn’t. The stats are 50-50 but, apart from the goal, they did not have a shot on target.”

Courtois made a string of superb saves that protected Real’s lead from the 59th minute, with Liverpool having 23 goal attempts to Real’s three.

“We saw we did a lot of good things, but it was not enough,” said Klopp, who has guided Liverpool to three Champions League finals and one victory in 2019.

The Merseyside club, who a few weeks ago were aiming for a quadruple, ended the season having won both domestic cups, but missing out on the Premier League and Champions League.

“Madrid had one shot on target and it was a goal,” said Klopp. “We played a good game but when you lose 1-0, it was not good enough. I told the boys in the changing room I feel the pride already. These boys played an outstanding season and the two competitions we couldn’t win, we didn’t win for the smallest possible margin.”

Liverpool missed out on the Premier League after finishing a point behind champions Manchester City.

“The boys will realise how special it was what they did [this season],” he added. “It’s obviously a different kind of success, not the success you want to have, but I have the strong feeling we will come again. The boys are really competitive. We have an outstanding group together. We will again have an outstanding group together and then we go again.

“Obviously, we have to try a bit more often than others, but no problem. Where is it next year? Istanbul. Book the hotel!” Reuters/DM