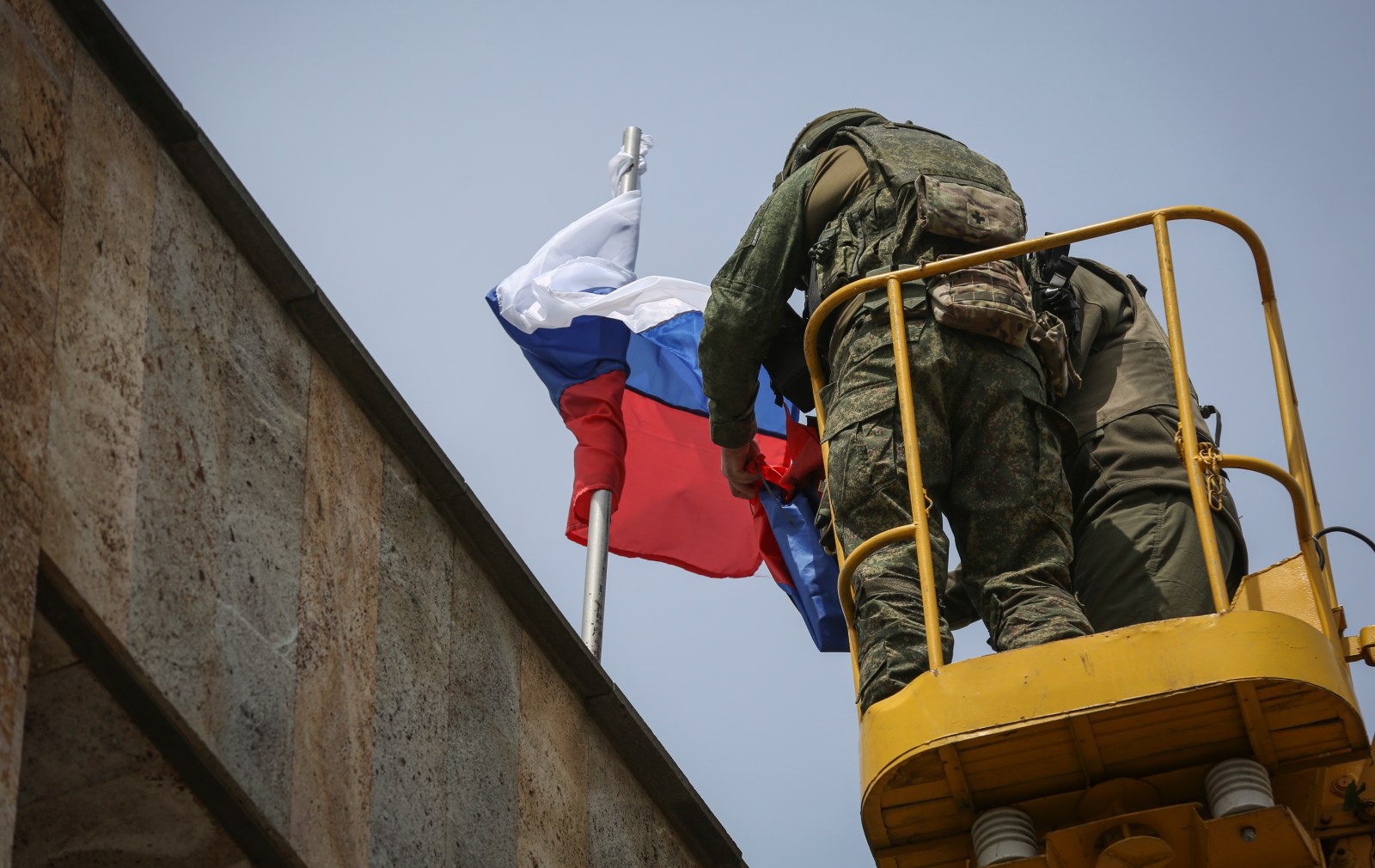 Igor Zakharevich (L), the militant-appointed mayor of Debaltseve, arranges the flags of Russia and the self-proclaimed Donetsk People's Republic at the city administration building of Svitlodarsk, Donetsk region, Ukraine, 26 May 2022. Russia has taken control of the city of Svetlodarsk, located 80 km southwest of Severodonetsk, which was the center of Russian attacks in recent days. On 24 February Russian troops had entered Ukrainian territory in what the Russian president declared a 'special military operation', resulting in fighting and destruction in the country and a humanitarian crisis. EPA-EFE/ALESSANDRO GUERRA

KYIV/POPASNA, Ukraine, May 27 (Reuters) - Russia's separatist proxies in eastern Ukraine claimed full control of the important battlefield town of Lyman on Friday, and Ukraine appeared to concede it, as Moscow presses its biggest advance for weeks.

Lyman, site of a major railway hub, has been a front line target as Russian forces press down from the north, one of three directions from which they have been attacking Ukraine’s industrial Donbas region. The pro-Russian Donetsk People’s Republic separatists said they were now in full control of it.

Oleksiy Arestovych, adviser to Ukrainian President Volodymyr Zelenskiy, appeared to confirm the fall of Lyman in an interview posted on social media overnight, and said the battle there showed that Moscow was improving its tactics.

“According to unverified data, we lost the town of Lyman,” Arestovych said in the video, adding that the attack had been well organised. “This shows, in principle, the increased level of operational management and tactical skills of the Russian army,” he said.

The Ukrainian governor of the Donetsk region, Pavlo Kyrylenko, told media outlet Hromadske that Lyman was “mainly controlled by Russian troops” but the Ukrainian military had taken up new fortified positions in the area.

After being driven back from the capital Kyiv in March and from the outskirts of the second biggest city Kharkiv earlier this month, Russian forces are staging their strongest advance in weeks in the eastern Donbas region.

Western military analysts say success could set the stage for a protracted conflict.

In the easternmost part of the Ukrainian-held pocket, Russian forces are trying to encircle Ukrainian troops in the cities of Sievierodonetsk and Lyshchansk, after breaking through Ukrainian lines further south in the city of Popasna last week.

Popasna, reached by Reuters journalists in Russian-held territory on Thursday, was a blasted wasteland of burnt-out highrise apartments and shattered municipal buildings. Russian tanks and other military vehicles tore through the rubble-strewn streets kicking up dust with their treads, and low-flying attack helicopters thundered overhead. The bloated body of a dead man in combat uniform lay in a courtyard.

Natalia Kovalenko had finally come up in recent days from the cellar where she had been sheltering, to sleep amid the wreckage of her own flat. The balcony had been blown away and windows blasted off by a direct hit from a shell.

She stared out wistfully into the blasted courtyard, recounting how two people had been killed there and eight wounded by a shell when they went outside to cook. Inside her flat, her kitchen and living room were filled with rubble and debris, but she had tidied a small bedroom to sleep. She was tired of being trapped in the cellar with dogs and cats.

“I just have to fix the window somehow. The wind is still bad. Cold at night,” she said. “We are tired of being so scared. So tired.”

Russia’s advance in the east follows a Ukrainian counter-offensive that pushed Russian forces back from Kharkiv this month. But Moscow has prevented Ukrainian forces from attacking the rear of Russian supply lines to the Donbas.

On Thursday, Russian forces shelled parts of Kharkiv itself for the first time in days. Local authorities said nine people were killed. Reuters filmed as shells burst in a neighbourhood sending clouds of smoke into the sky. A busy pavement was filled with broken glass and a pools of blood. A park’s coffee kiosk had been destroyed and windows were blasted out of a cafe and apartment blocks.

In the south, where Moscow has also seized a swathe of territory since the Feb. 24 invasion, Ukrainian officials believe Russia aims to impose permanent rule.

The Ukrainian military’s southern command said Russia was shipping in military equipment from Crimea, building a third line of defence to prepare for a potential Ukrainian counter-attack, and planting mines on the coast of a huge reservoir behind a dam on the Dnipro River that separates the forces.

“All this indicates that Russia will try to keep the occupied territories under its control,” it said.

In an overnight address, Zelenskiy criticised the European Union for dithering over a ban on Russian energy imports, saying the bloc was funding Moscow’s war effort with a billion euros a day.

“Pressure on Russia is literally a matter of saving lives. Every day of procrastination, weakness, various disputes or proposals to ‘pacify’ the aggressor at the expense of the victim merely means more Ukrainians being killed,” he said.

Western countries led by the United States have provided Ukraine with long-range weaponry, including M777 howitzers. Kyiv says it wants longer range ground weapons, especially rocket launchers, that can help it win an artillery battle against Russian forces in the east.

U.S. officials say the Biden administration is now considering supplying Kyiv with the M142 High Mobility Artillery Rocket System (HIMARS), which can have a range of hundreds of kilometers.

Washington had held back from supplying such arms partly over concern of escalation should Ukraine hit targets deep within Russia. U.S. and diplomatic officials told Reuters Washington has discussed this with Kyiv.

“We have concerns about escalation and yet still do not want to put geographic limits or tie their hands too much with the stuff we’re giving them,” said one U.S. official on condition of anonymity.

Russian Foreign Minister Sergei Lavrov warned that any supplies of weapons that could reach Russian territory would be a “a serious step towards unacceptable escalation”.

Russia calls its invasion of Ukraine a “special military operation” to defeat “Nazis” there. The West describes this as a baseless justification for a war of aggression.

By Natalia Zinets and Conor Humphries